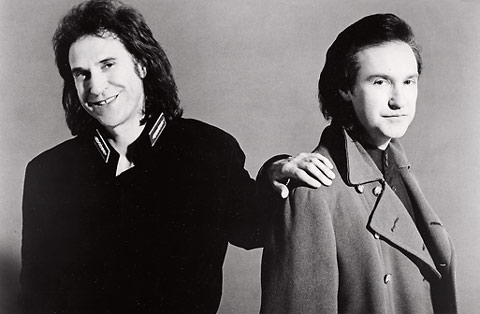 As if he was meant to fulfill some biblical prophesy, Raymond Douglas Davies was born in 1944 to Frederick and Annie Davies in north London’s Fortis Green neighborhood. He was the seventh child (and first son) of a seventh child. Then, in 1947, along came little David Russell Gordon Davies. Relations between the two brothers have run hot and cold ever since.

“Ray’s probably resented me since he was three years old,” says Dave Davies, lead guitarist, secondary vocalist and occasional songwriter for the Kinks, “I fucked it up for him. He was the baby of the family, the center of attention for three years. Then I came along and stole his thunder.”

In early 1964, while the Davies boys were trying to get the Kinks up and running, Dave began tinkering with a little green Elpico amp he’d bought at the neighborhood radio shop. “I was frustrated that I couldn’t get it to do anything,” he says. “So I took a Gillette razor blade and sliced the amp’s speaker all the way round. I plugged it in, and this rasping sound came out.” It was just what Dave was looking for: the distorted squall of guitar noise that would soon grace the first Kinks hit, “You Really Got Me.” This signature guitar mayhem was described in one record company’s rejection letter as “the sound of a barking dog.”

Dave’s vocal style was just as rough: a coarse, three-pack-a-day wheeze and the perfect complement to Ray’s quavery, music-hall delivery. Dave’s voice never sounded more moving than it did on “Death Of A Clown,” from 1967’s Something Else By The Kinks. “I wrote that song about my only bad childhood experience: going to the circus,” says Dave. “I used to hate clowns. Why do people think they’re funny? I think they’re terrifying.” First released as a Dave Davies single, “Death Of A Clown” cracked the U.K. top five. Aside from follow-up hit “Susannah’s Still Alive,” Dave’s other Kinks-backed solo 45s from the era sank without a trace.

“Strangers,” a poignant Dave gem from 1970’s Lola Versus Powerman And The Moneygoround, was recently used to telling effect in Wes Anderson’s The Darjeeling Limited. “That song came about when I was experiencing my psychic death,” says Dave. “I was trying to feel better about myself. We reach points in our lives when we’re faced with questions: Where am I? Why am I here? We get so bogged down with petty silliness that we forget the big picture.”

While 2004 saw Ray get shot in the leg during a robbery in New Orleans, the year was even less kind to Dave. That June 30, the guitarist had just entered an elevator at London’s BBC Radio headquarters when his world turned upside down. “My whole right side went numb,” he says. “I couldn’t stand up properly. We got outside, and I virtually collapsed in the street.”

By the time an ambulance took him to a hospital, Dave had lost his speech and was paralyzed on his right side as a result of a stroke. “The odd thing is I was always super-aware of what was going on,” he says. He even had the feeling he could peek around the corner of reality. “Obviously, you’re in the now,” he says, “but you can also see a little bit of the future.”

Four days later, Dave was walking with the aid of a cane and began therapy to fully regain his speech. He also started painting pictures in the hospital kitchen, the first of which he called Stroke. Dave’s biggest step to a complete recovery was taken with last year’s release of Fractured Mindz (Koch), a fascinating LP with a number of songs that come from a wilder, previously untapped side of his muse. “I went through a lot of shit to make that record,” he says. “I feel great now. It was rejuvenating to sit and cry my eyes out. Getting rid of these emotional toxins makes you feel so much younger.”

The inevitable questions put to the Davies brothers, of course, are: How are they getting along these days? And what are the prospects of a full-scale Kinks reunion?

“I don’t see anything wrong with doing some Kinks shows,” says Dave. “But I don’t know if I’d feel too happy about going back into the studio with Ray, because he’s off his head, man. He’s, like, spoiled. He doesn’t even know what an asshole he is. He’s the first person on the planet who would own up to thinking he’s a genius. But real geniuses don’t realize they are.”

“I can hate him, but never not love him,” says Dave. “Sometimes I don’t like him, intensely. But that love’s always there.”