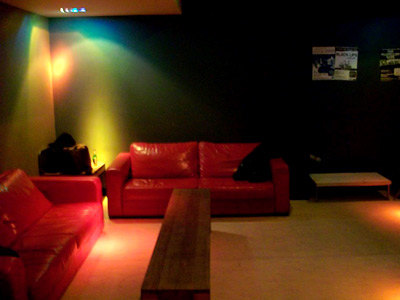 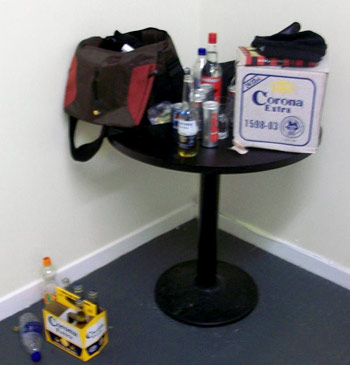 Keene: Playing guitar last year with Bob Pollard’s Boston Spaceships, I made a new friend in Spaceships drummer John Moen. (John’s main gig is handling the skins for the Decemberists.) We were talking about various venues and dressing rooms when he introduced me to a new term: “fluffy.” As in, “Was the dressing room fluffy, meaning nice and accommodating to the artist’s needs?” The backstage accommodations on that tour ran the gamut from luxurious and very nice to downright stanky and nasty. Rock ‘n’ roll dressing rooms on the punk-rock, Frank Riley circuit are notoriously bad, the missing ingredient usually being the private bathroom exclusively for the performers. This inevitably leads to gangs of men peeing into any handy receptacle, be it a huge trashcan/piss bucket and various cups and bottles—or, if there’s a door handy, a nice patch of grass or a dumpster in the alley.

I was a bit envious when I visited John backstage at the Decemberists’ show at L.A.’s Wiltern Theater last fall. Not only were there dressing rooms, showers and bathrooms galore, I couldn’t help but notice the wardrobe case on display in the main room. Hmm, what shall I wear tonight? Maybe that shirt, which would go great with that pair of trousers! No more Motel 6 ironing boards or wrinkled shirts hanging on the seatbelt in the van that everyone knocks down when they get in—man, this is fluffy living! As I prepare to go out on tour this spring with the Tommy Keene Group, I’m sure I’ll run into some fluffy and unfluffy dressing rooms. If only I could borrow that wardrobe case.

“Big O Gets An Earful” from Boston Spaceships’ upcoming The Planets Are Blasted (download here):
https://magnetmagazine.com/audio/BigOGetsAnEarful.mp3

2 replies on “From The Desk Of Tommy Keene: Rock ‘N’ Roll Dressing Rooms”

i wonder what you thought of the new Brown Submarine bathroom at the Turf Club… good times, Tommy!