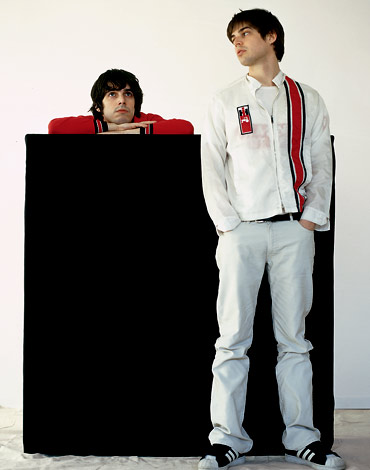 Anyone familiar with the slightly eerie, almost symphonic late-’60s pop smashes written by Jimmy Webb (“Wichita Lineman,” “MacArthur Park”) would’ve expected nothing less than stardom for his talented sons, Christiaan and Justin, 30 years later. For a while, the Chicago-based brother act looked like it might pull it off. Combining production bits lifted from Abbey Road-era Beatles and the smart vocal flourishes of early Todd Rundgren with a dusting of mid-period Pink Floyd, the duo also kept an ear cocked to indie-rock landmarks such as Neutral Milk Hotel’s In The Aeroplane Over The Sea and Liz Phair’s Exile In Guyville. The Webb Brothers released Beyond The Biosphere, a right-cross to the heart, in 1998, then went for a knockout left-hook to the chin with the Stephen Street-produced Maroon. If they could’ve sold more records, there might have been another championship belt in the family trophy case.

Catching Up: The Webb Brothers are currently in Los Angeles, where for the past several years they’ve been working on The God Helmet, an animated concept album.

One reply on “Lost Classics: The Webb Brothers “Maroon Mews””

They nailed it: that feeling of invincibility and helplessness of the adult children that are fresh out of college. Flush with new responsibilities, but with many wild oats still to sow. They capture it perfectly. As a much-older, more-responsible “adult” now, this evokes equal amounts nostalgia and wonderment as to how I could have ever been so stupid and wild.
Perfect.