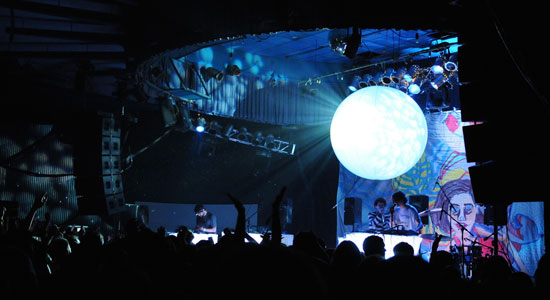 MAGNET’s Matt Siblo reports from the All Tomorrow’s Parties festival in the Catskill Mountains.

If Friday ended with a Jesus Lizard-induced freakout, Saturday would have to begin gently with the hair of the dog provided by Sufjan Stevens. The quietly enigmatic songwriter has been laying low, only recently reemerging to formally release his ambitious BQE performance piece and a reworking of his 2001 album Enjoy Your Rabbit. With that backward-looking spirit, he performed 2004’s Seven Swans in its entirety, a brief diversion from the states-centric focused project he began in 2003. Decked out in all tie-dye, Stevens and his band launched into a surprisingly moving, but not overtly precious, rendering of the album. Subdued without seeming too bookish, haunting songs like “The Transfiguration” and “Sister” had both emotion and muscle. I believe most Christians would count the performance as attending church, so those pious attendees are all square for tomorrow. The perfect way to start the day.

But the afternoon can be a difficult time to rock. Athens, Ga.’s Circulatory System did its best to get the second stage moving, though its sonic bricolage led to the insertion of some confusing audience applause from still groggy attendees. New York’s Black Dice took Suicide’s deafening cues and amped them to 11 with a menacing, seizure-inducing set that was tough to take. And I mean that in the best way possible.

A new bell/whistle this year was the inclusion of a taping of Ian Svenonius of Nation Of Ulysses/Make-Up fame doing his post-modern Dick Cavett routine for his Vice talk show Soft Focus. Stumbling into his interview with Jon Spencer was like entering a snarky time warp, each gentleman sipping wine and talking shop in front of a plastic fireplace. While both men’s impeccable fashion sense untied them, the similarities stopped there. After 45 comically uncomfortable minutes, the irony and wine ran dry, hurling the interview to its unceremoniously conclusion.

Brandon Cox’s first set of the day (under his Atlas Sound moniker) was an opportunity for a lazy mid-day rest, as attendees sprawled out on the floor for a shoegaze-induced siesta. After continuously baiting the crowd with “Walkabout,” the duet with Panda Bear found on his new record Logos, Cox left the stage by his lonesome. The headband-inspired classic rock of Akron/Family gave the crowd the best of its two worlds: jammy Americana and obnoxious sonic squalor. Its hard charging set was satisfying regardless of preference.

And then, of course, there is Shellac, whose latest jaunt out of hibernation was enough to bemoan its otherwise self-induced non-ATP exile. Albini’s sermon on “The End Of Radio” was the highlight of its lengthy, unrelenting 70-minute set. Most compelling Q&A tidbit: Bassist Bob Weston only has sex with beautiful women, not hoes.

Atlanta’s Deerhunter followed Shellac on the main stage in a performance that Brandon Cox ominously declared as its “last for a while.” These words are said often and acted upon considerably less; it’s a shame to think the band will be sidelined in the midst of its current stride. Its set stemmed primarily from last year’s Microcastle with an inconceivably thicker layer of reverb and distortion. Let’s hope this isn’t goodbye for good.

The idea of Animal Collective (pictured) closing a festival might have sounded like a promoter’s masochistic dare five years ago, but that was then. The notoriously mercurial band’s most recent identity on this year’s Merriweather Post Pavilion is one of joyful bombast, and its celebratory set suited them. If Black Dice’s paranoid racket and dizzying lights transposed the crowd into a hallucinogenic nightmare, Animal Collective’s luminescent jellyfish lights and magical, projector orb induced an infectious state of ecstasy. By the time it closed with “Brother Sport,” there wasn’t a dry shirt on the floor.