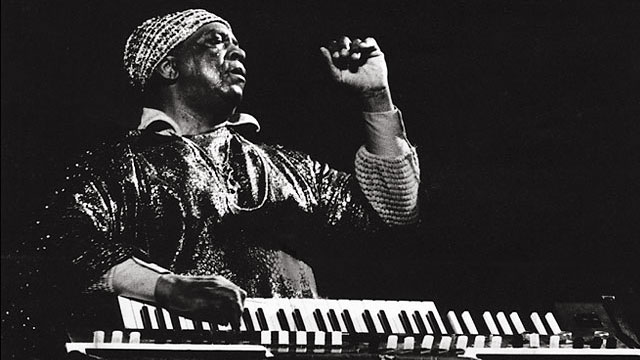 Moody: I didn’t get it at first, the Sun Ra thing. Or maybe I kept trying to like the more earnest jazz players, like Bill Evans or Gerry Mulligan or Chet Baker or Joe Pass, which I guess means mostly white jazz, and I failed to see the humor in a lot of jazz, in Sun Ra’s case, in anyone else’s case. (I liked early-’70s Miles Davis, and that was about it.) But then I was trying to like the sort of antic ’80s incarnation of Sun Ra, which is a certain historical moment in his development. The matter rested there for a while, notwithstanding the artist’s passing. And then a few years ago I was out west trying to work on a novel, and I went to a great used music store in Tucson and picked up this one, backed with Art Forms For Dimensions Tomorrow, and for a change I totally got it, the heavy reliance on tribal percussion, with strange period effects, echo and reverb. It’s a beautiful, strange album, totally singular, but also recognizably of Sun Ra’s output. When I got this one under my belt I was suddenly a lot better at understanding Space Is The Place and other similar efforts as well. I suppose I needed the really experimental impulse first, and the more conventional and more ballad-oriented and standard-oriented opuses made more sense to me thereafter. The same was the case with Rahsaan Roland Kirk, by the way. And Mingus. Now I love all of them. And Bill Evans doesn’t sound too earnest anymore either. Not to mention Coltrane, Sonny Rollins, Max Roach, etc. Video after the jump.

One reply on “From The Desk Of Rick Moody: Sun Ra And His Arkestra’s “Cosmic Tones For Mental Therapy””

I love Rick Moody. I’ve played trumpet since I was 12, I’m in the 50s range now, and I’ve loved Sun Ra, Bill Evans, and of course Miles and Mingus and that’s not to mention Steve Coleman, a latter day Charlie Parker I can’t help but think came within inches of changing contemporary music wholesale–how long will we have to be anchored to 4/4. Anyway, that amazing individual who wrote Purple Amercica has the same chops as Miles or Sun Ra or Coltrane–things to say, things to say with feel, insight. What can I say. L. Cady