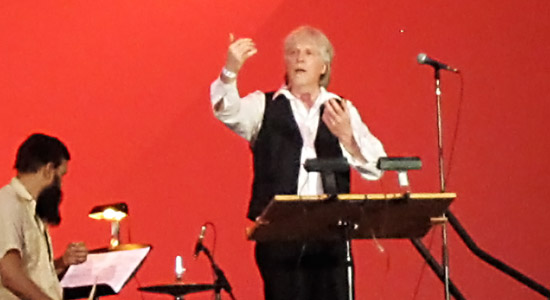 Moody: In the Rhys Chatham versus Glenn Branca turf war, which is not far from the Philip Glass versus Steve Reich turf war, Chatham is the affable and less obtuse one, or so it seems from the outside. I agree that it’s disappointing that the two of them seem resigned to making ever larger ensembles, a battle that Rhys seems to have won for the moment by getting 400 electric guitarists to play this piece. The idiom is frankly minimalist, which means that it sounds quite a bit like Reich in spots, or perhaps like La Monte Young’s brass pieces. The tonality of it is disappointing if you are a fan of, e.g., Chatham’s Guitar Trio Is My Life!, which squalls more interestingly. But if you leave aside these quibbles, this is the most beautiful, most seductive, most unforgettable piece of modern composition made in years. Played in a church in Paris, because no other setting would do it justice, and the resonance of the space makes the recording even better. The only disappointment, really, is the crowd noise, which breaks the spell some, but how else to record the thing? Is there a venue that could hold this many players otherwise? Chatham continues, despite his inconstant output, to be one of the very greatest of modern composers. Video after the jump.