As 2009 has come to an end, we are taking a look back at some of our favorite posts of the year by our guest editors. Today’s entry is from October 13. Here, Eugene Mirman writes about Zach Galifianakis. Prior to ’09, we didn’t even know Galifianakis existed, but his work in The Hangover, Bored To Death and Up In The Air has made us look forward to the actor/comedian’s upcoming Youth In Revolt and Due Date.

Along with David Cross, Zach Galifianakis and Patton Oswalt, Eugene Mirman has liberated stand-up comedy from the zany fratboys and sweater-clad neurotics. Mirman’s latest album, God Is A Twelve-Year-Old Boy With Asperger’s (Sub Pop), isn’t representative of a “new breed” of comedy or a supposedly edgy advancement in humor; it’s a collection of smart, imaginative bits that embody the anger, absurdity and awkwardness of everyday life. You might also say it’s full of guffaws. Mirman, who also published a book this year (the mock-advice tome The Will To Whatevs) and regularly appears on HBO’s Flight Of The Conchords, is guest editing magnetmagazine.com this week. Read our Q&A with him. 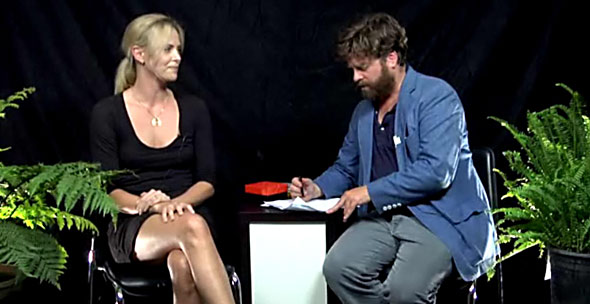 Mirman: Zach Galifianakis hosts Between Two Ferns, a superbly awkward web-chat show for Funny Or Die where he interviews celebrities flanked by two ferns. (That’s where the name comes from.) Some guests have included Jon Hamm, Natalie Portman and, most recently, Charlize Theron. It’s one of the funniest things on the Internet (excluding clips that capture normal, middle-class people making terrible mistakes and either getting very angry or hurt). Instead of spoiling any, I recommend you watch it.