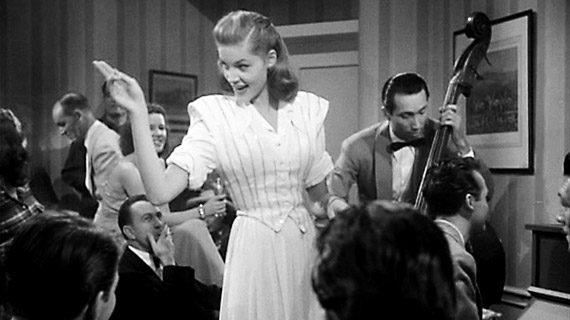 Hatfield: I first heard this song in the Humphrey Bogart/Lauren Bacall movie The Big Sleep. There’s a scene in which Bacall is casually singing it in a roomful of people at a sophisticated house party. I’ve since found two recorded versions of the song—one by Ella Fitzgerald, one by Anita O’Day—and I’ve been listening to them nonstop. The song is just so infectious and cheeky, it makes me giddy. I bounce around my apartment singing, “She’s a real sad tomato/She’s a busted valentine,” and feeling really good about life. I haven’t been able to find a recorded version of Bacall singing this song. Does such a thing exist? Her version remains, in my memory, the best. Was it the thrill of hearing the song for the first time? Bacall is not known for her singing (and as fas as I know, it might not even be her voice singing in the film; she may have been lipsynching to someone else’s singing), but she sang it so cool in the movie. And she was so beautiful in that dress. Video after the jump.

i really liked the way she sounded in that clip. this at least tells you that lauren bacall was in fact quite a capable vocalist: