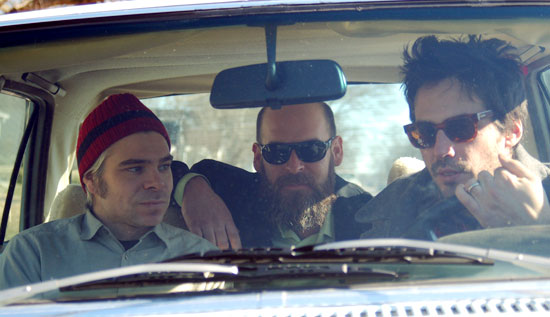 When Clem Snide began recording albums more than a decade ago in New York, the band’s clever alt-country songs often came across as an ironic take on Americana. Everyone knows you can’t do country music in the big city, and where did Israeli-born singer/guitarist Eef Barzelay get that twang from, anyway? After years of slogging through the indie-rock touring circuit, a band breakup (from 2005-2009, during which time Barzelay issued a pair of solo albums and scored the film Rocket Science) and a move to Nashville, Clem Snide has earned the all-American desperation and heartbreak that lies in the marrow of its latest album, The Meat Of Life (out this week on 429 Records). From country weepers (“Denver”) and power pop (“BFF”) to the rangy, almost prog-like title track, Barzelay is now surveying the modern heartland with all the acumen and authenticity of peers such as Bill Callahan and Jason Molina. Barzelay chewed the fat with MAGNET about The Meat Of Life, ukuleles and the day that he and Ben Folds each wrote separate songs about Normal, Ill. Barzelay will be guest editing magnetmagazine.com this week.

MAGNET: The day after J.D. Salinger died, I read an obituary-type piece on Slate that referenced your lyric in “End Of Love”: “The first thing every killer reads is Catcher In The Rye.” Did you happen to see that?
Barzelay: I did see that, and a few other blogs and such made mention of it—the Google alerts lit up like a Christmas tree. I was flattered that people would reference that song after five years. It means I have successfully seeded the collective unconscious and now, I shall sleep.

After I heard about Salinger’s death, I had that kind of moment when you realize that—for me, at least—the world had changed somehow. Has that ever happened to you?
I felt that way when George Carlin died. I’ve loved him ever since I was 13 years old. He was always touring, which I now greatly respect. I mean, he did a show at Fairleigh Dickenson University in Teaneck, N.J. That is a tertiary market if ever there was one. And it was maybe the most I’d ever laughed out loud in my short life.

The Meat Of Life‘s opening track, “I Got High,” reminds me of the Ben Folds song “Effington.” Not only because both reference the town of Normal, Ill., but also because they both seem to embrace some basic aspects of American life. I was wondering if you were familiar with Folds’ song.
Dude! That’s amazing that you would connect those two songs because Folds and I were on tour together when we both wrote our respective songs—on the same day, no less. I’ve never even spoken to him or anyone about it. I remember watching his show that night, in Normal, Ill., when he and the band started fucking around and just made “Effington” up on the spot. I wrote mine alone in a motel room, as God intended.

The song starts out with the excellent lyric “I got high with a Sufjan Stevens fan in Normal, Ill.”
I think for me “I Got High” was a way to alchemize some nasty old-man bitterness I was starting to feel playing alone in boomy gymnasiums to mostly indifferent college kids. But the show that night in Normal was one of the best I’ve ever had. It was in a beautiful theater with great sound and the crowd just hung on my every sweet and tender note. Also, some local Sufjan fans may have hooked me up with a smoky treat that night as well. I secretly want “I Got High” to play like a classic-rock anthem, cell phones waving the air.

It seems to me that Meat Of Life is one of Clem Snide’s most “American” albums; there are so many sounds and images that make it heartland-y: the songs with girls’ names in them (Anita, Denise, Mary), a sunrise in a Wal-Mart parking lot, etc. It seems that you are interested in exploring what happens in American lives, whereas before I think Clem Snide albums tended to get attention for being clever or witty.
I’m heartened that you would say that. Maybe it’s because I’m an immigrant that I tend to look at “America” a little different—or at least little harder. Touring is a big part of it in that I’m not only traveling all around these United States (which I’ve been doing off and on for the last 10 years) but also there’s an overall out-of-body feeling to it. Being in constant motion and cut off from normal day-to-day life inspires empathy in me and I feel like I can step into random strangers’ lives and see through their eyes. Like, just what is that Denny’s waitress on the outskirts of San Antonio really feeling? The messy byproduct of it all seems to be some songs. I’ve drawn inspiration more and more from this act of channeling people and just getting out of the way when they come. When I was in my 20s and writing those first Clem Snide records, it was more introspective and labored. I was still anxiously stumbling around the suburban pop-culture junk logged in my post-adolescent brain. My parents got cable in 1979. But it’s always been just about people and the conflicts and struggles therein. Maybe because of this “outside looking in” aspect to it, some critics questioned my sincerity or dismissed it as “irony,” but I’m still not sure what irony even is. Thanks a lot, Alanis!

I love that the protagonist in “Denver” is confessing an affair to his spouse/girlfriend and, over the course of the song, just keeps digging himself a deeper hole: Oh, by the way I got this girl pregnant. She’s really young. And she’s keeping the baby. You don’t hear that much outside of old country music.
Ain’t it the truth! I do love that old country music. New country still does it, too—I think just with more lifestyle branding. I picture “Denver” as a cowardly note or a postcard left on the counter or even an email, and I know it works because people have come up to my wife after a show and offered condolences. I’m just a vessel.

I’m not sure of the circumstances of the recording of Hungry Bird—I believe it was started, maybe partly recorded and then resurrected after your solo albums? But I was wondering why it was important for you to complete that album as Clem Snide.
That record was very much a Clem Snide collective effort. I used the guys (Tony Hamil and Roy Agee) that I rounded up for the Rocket Science scoring session only to fill in some of the blanks. It began very much as a group effort that just went sour when me and Pete hit upon some major creative differences. I get that question often as to what is the difference between Eef Barzelay and Clem Snide, and I just don’t have an interesting answer. I really want to keep it interesting, for the sake of the children.

Meat Of Life seems to be a reassurance that Clem Snide is back and shiny and ready for another few rounds. What, if  anything, do you think has changed—or what do you want to be changed?
I would for sure say Clem Snide is back and shiny. I’d like to think I’ve gotten a little wiser about how to handle it all especially the business side of things. But really, I just take it one record at a time and hope I can keep on truckin’ with it.

You spoke to our pal Josh Modell very openly about your career and life circa Hungry Bird, and you talked about the challenges of being a guy in a band but also owning a house and being a father and husband. How are things on the homefront in Nashville these days?
Josh Modell is a great guy. I went to a sleepover at his house once and we watched backyard wrestling videos and drank soy milk. Through no fault of his, though, I kind of regret doing that interview because I didn’t like how I came across. I certainly don’t want to seem whiny or resentful for the way things have turned out for me in the music business. Really, it’s all gone down just as I had suspected. I would like/need to get my stock value up a bit, but really the most I ever hoped for was cult status. Everything is well and good on the homefront.

Lastly, I recently bought a ukulele for my toddler son, and I know you play it. To my child’s displeasure, I’ve been hogging the instrument somewhat. Why is the ukulele so much more fun to play than the guitar?
The ukulele is so much more fun! It’s because the guitar has too many strings. Four is more than enough. And girls just love a ukulele, especially Hawaiian ones.

[…] out Magnet interviewing Eef here.  And grab a free download of the new track ‘The Meat of Life’ while you’re at […]

[…] Snide’s singer/guitarist Eef Barzelay explains the song to Magnet: I think for me “I Got High” was a way to alchemize some nasty old-man […]