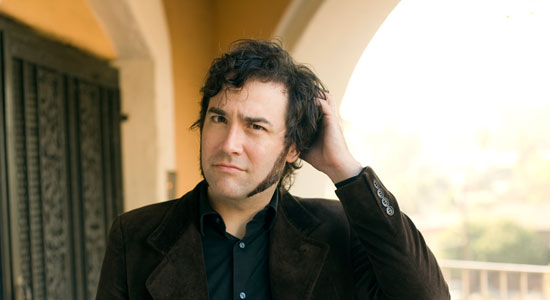 Bleu McAuley had his first (and only) brush with the mainstream back in 2003, when his shifty ode to insecurity, “Somebody Else,” found its way onto the hugely popular soundtrack to the first Spider-Man movie. The tune was also on Bleu’s second album, Redhead, a delectable slab of power-pop bombast and one of the most unjustly overlooked albums of the early 2000s. Seven years and one falling out with Columbia Records later, Bleu knows better than to go sniffing around for scraps amidst the carnage of a dying industry. Recently, he averted any future label shenanigans altogether, appealing directly to his fans for money to make his latest CD, Four (The Major Label). They responded by forking over almost $40,000 via online funding platform Kickstarter. Stylistically flamboyant and prone to abrupt changes in mood (much like the man himself), Four finds Bleu at ease with his easily distracted self, whether he’s sweating his own mortality with manic glee (“Dead In The Mornin’”), singing the praises of the city that gave him his start in the music biz (“B.O.S.T.O.N.”) or falling prey to his inner Van Morrison (“In Love With My Lover”). Over the years, Bleu has found highly entertaining ways to celebrate his knob-twiddling heroes. Alpacas Orgling is the 2006 product of his Jeff Lynne-loving collective known as L.E.O. And for LoudLion, he’s recruited Rooney’s Taylor Locke, the Donnas’ Allison Robertson and some other L.A. pals to shamelessly emulate Mutt Lange. The band’s contributions to the Balls Of Fury and The Hills Have Eyes 2 soundtracks couldn’t sound any more like circa-Hysteria Def Leppard if they had spots. Bleu will be guest editing magnetmagazine.com all week.

MAGNET: So you must be happy with the success of Four and the Kickstarter campaign.
Bleu: At first, I was really uncomfortable with the uncertainty of the whole thing. But when I saw the response, I couldn’t believe it. It totally changed my perspective on what I was doing—for the better. Now, I’ve started my own label with a $40,000 marketing budget. If I’d gone to the head of my last label and asked him for $40,000, he would’ve laughed at me.

My, how things have changed in the music industry.
Yeah. The way I look at it, all the money that used to be going to just a few labels and their artists is now being more fairly dispersed. That’s good for people like me, who dabble in a bunch of things and hopefully land on their feet most of the time. I like it when people take chances.

You share a producer with the Jonas Brothers in your friend and collaborator John Fields. You’ve also done some writing for them. How different is it churning out songs for a teen audience?
Not as different as you’d think. The Jonas Brothers’ music is actually very good power pop, though the lyrics are obviously written from a younger perspective.

What about the Major Labels, your project with Mike Viola (Candy Butchers) and Boston-based producer/drummer Ducky Carlisle? You put out a great album, Aquavia, in 2006. Any plans for another?
I hope so. We’ve already written a few songs for a new record, but it’s really hard to nail down Mike. We were supposed to start recording a few months ago, and it fell through when he had something come up. We record in Boston. Ducky has a studio there where I do lot of my records, as well. If it were up to me, we’d already be done with the second record.

Will there be another L.E.O. album?
People always ask me that, but my answer is no. It was meant to be a one-off deal. I’m really happy with what happened with it, but it’s not something that I could ever recreate. I always imagined it as a trilogy, and I’m almost done with the second record in that trilogy—though it’s taking forever.

LoudLion?
Yeah. I grew up on Def Leppard—they were one of my favorite bands. But then I really came to appreciate them as an adult because of Mutt Lange’s production and the songwriting. It’s so unique, but still so commercial and flawless. If Def Leppard had made a record between Pyromania and Hysteria, this is that record. It’s not influenced by Def Leppard; it sounds like Def Leppard. I co-wrote and fully produced all of the songs, but I’m actually not singing.

How’s it going over with Bleu fans?
Much to my chagrin, most are actually not Def Leppard fans. [Laughs] They haven’t entirely embraced the project at this point.

Bleu deserves much more notoriety than he has. His new album’s great. His last album was also great. I haven’t hear one yet that I don’t like.