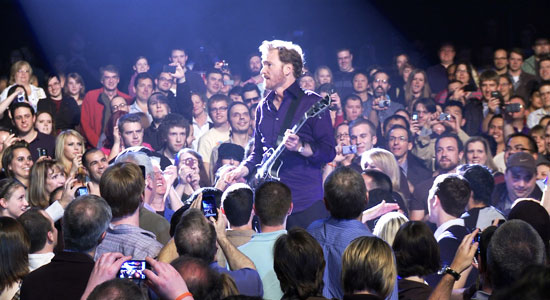 MAGNET’s Mitch Myers files his third round of notes from SXSW.

Things are pretty busy in Austin this week. While I was unable to attend screenings for documentaries about odd-but-lovable media characters like Pee Wee Herman and Elmo, I did catch the premiere of Conan O’Brien Can’t Stop. Director Roman Flender’s movie captures the tall redheaded one’s post-Tonight Show 32-city comedy trek, aptly dubbed his “Legally Prohibited From Being Funny On Television Tour.” And as we learn from this documentary, the impetus for O’Brien’s decision to get out on the road so soon after his acrimonious split with NBC stemmed from his voracious/personal need to perform in front of a live audience.

The film certainly has plenty of laughs, but it is also a tough and personal examination of O’Brien’s ego and his insecurities. O’Brien was filled with rage after getting bumped by NBC and Jay Leno, and he clearly felt like he had something to prove to the world—and to himself. Much like Sid Caesar did during his famous work on The Show Of Shows, O’Brien pushes himself and his loyal staff relentlessly. O’Brien’s humor is also his greatest weapon—onstage he uses it to attack his former employers, but it also serves to defend against his fears and frustration in the course of the tour. O’Brien’s personal assistant catches a lot of abuse, but so do all of his writers, agents, producers, backing musicians and anyone else who dares to enter into the world of Team Coco.

O’Brien appears more and more haggard as the tour (and the film) progresses, and he loses 15 pounds in the process. His cutting sarcasm peaks during the numerous meet-and-greets designed to honor the man on his tour, but as much as he claims to hate having to be “on” all the time, he really can’t help himself, riffing and doing shtick with perfect strangers to the point of exhaustion when he should be resting up for the next performance.

O’Brien also seems compelled to attack his co-workers physically, but he does it with so much love and humor that they take the abuse without complaint. In one of the most revealing scenes, O’Brien taunts visiting actor Jack McBrayer (30 Rock) about being a hick to the point of true embarrassment—and then forces his uncomfortable Southern guest to dance to an impromptu version of “Dueling Banjos.”

The segments of O’Brien’s onstage performances are always clever and well-conceived, but the weariness that comes with high-level showbiz is the real lesson here. The stakes are huge, both personally and professionally, and like many comics, O’Brien chose to work out his numerous issues in public. The man even came out for the SXSW movie premiere that he dreaded, compulsively pleasing his fans and keeping his face in the public eye no matter what the cost.

We were at the St Regis this weekend and my family would like to see you again. I shook your hand at the valet ski area and we saw you multple times this weekend Chris Reeder e-mail crplastic01@earthlink.net You are a great father kissing your son in the looby Saturday