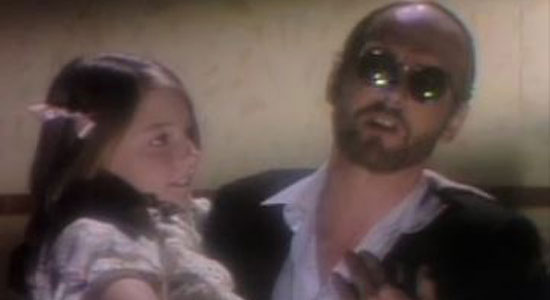 Fleming: I was always a big fan of Michael O’Donoghue from his days as one of the founding writers and editors for National Lampoon. He was also the first head writer of Saturday Night Live. He wrote and appeared with John Belushi in the “The Wolverines,” the opening sketch aired on the first show. He would occasionally make an on-screen appearance as the sadistic Mr. Mike to tell a cruel bedtime tale to the kiddies. His brand of humor was very dark and twisted and still creates debates about his influence on humor in TV shows today. He left SNL in 1978 and did a television special for NBC called Mr. Mike’s Mondo Video, which the network rejected. He continued to work on various projects, until in 1994 he died from a massive cerebral hemorrhage. His wife Cheryl said that when it happened, it looked like “bolts of lightning” were going off in his eyeballs.

Video of Mr. Mike telling Jodie Foster about “The Little Train That Died” after the jump.