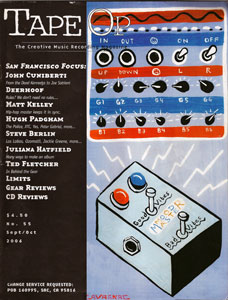 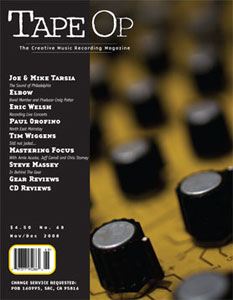 Bianchi: In the winter of ’96, my friend let me borrow two things that changed the course of my music career: 1) an old Fostex four-track cassette recorder, and 2) the first three issues of Tape Op magazine. Tape Op started off as a humble little photocopied ‘zine that primarily focused on independent producers and bands that recorded themselves. It was founded by Portland, Ore., engineer and Jackpot! Recording Studio owner Lawrence Crane. In those days, before you could google everything to death, you relied on magazines for information and inspiration. Tape Op was bursting at the seams with both of these things!

Tape Op took the mystery out of recording while leaving the magic intact. It helped new bands and artists realize that they could create their own records without having to spend thousands on studio time. This is a concept completely taken for granted these days because of the pace of technology. Hell, you can do multi-track recording on most smart phones now. The issue that sealed the deal for me was Tape Op number two. It featured an interview with the Apples In Stereo. I must have read that article 50 times. Robert Schneider just made recording sound so fun. Within a couple of weeks, I jumped up from the four-track and bought a 1/4 eight-track and a used 16-channel board.

Though Tape Op has shifted its focus from analog recording to mostly digital, it has kept its heart in tact and proves more than ever to be a valuable resource for even the most casual producer. Another amazing part about Tape Op is subscriptions are now free. Yes, free! Even if you hate recording but love magazines, I suggest getting in on that action.