With a major-label distribution deal right out of the chute, Candy Butchers seemed destined to follow in the footsteps of other smart, song-focused, melody-driven, ’90s outfits like Ben Folds Five and Fountains Of Wayne before the proverbial window of opportunity slammed shut circa 1997. Since then, seemingly unflappable leader Mike Viola has kept plugging away, fending off adversity in his personal life (his first wife died of cancer) and overall public indifference to get his music out there, whether as himself, under the Candy Butchers moniker, on film soundtracks or elsewhere. Viola’s new solo release, Electro De Perfecto (Good Morning Monkey/Hornblow), is a slickly produced celebration of a versatile songwriter in his prime, one who deserves a little more love. Viola will be guest editing magnetmagazine.com all week. Read our brand new Q&A with him. 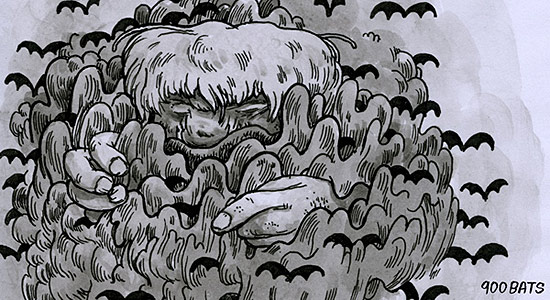 Viola: Travis is an L.A. artist. Check out his website, and buy one of his books. I was introduced to him by a random blog my wife was subscribed to. There was a video of him (somewhere out there now) going through things in his apartment, stuff, putting pieces together making pop-culture mash-ups of little figures and pop-culture trinkets, plastic idols, that just look cool, strike him in a way that makes him want to set them up and draw them, knock them over the head and drag them into his world. It’s really that simple, and that’s why I iove it. It’s pure, it has no lofty explanation ’cause it’s speaking its own language as it moves along. I’m a huge fan of his drawings and asked him to do the gatefold of my new album Electro De Perfecto. Which he did brilliantly.