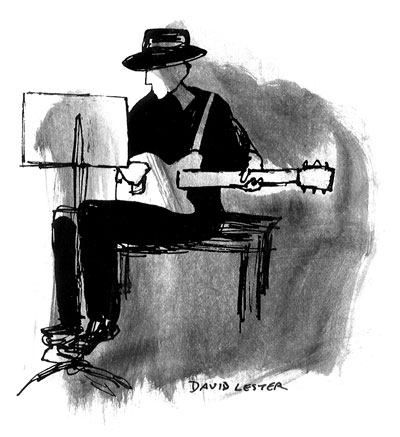 Having made her selection for the upcoming exhibition, Nadine turned toward the door and noticed a painting on the wall. A banjo player seated in a semi-lit room, deep murky blues, very loose. Along the bottom, neatly printed in mustard yellow paint, The Politics Are Not Obvious.

“You can say that again,” Nadine muttered. The banjo player was more of a suggestion than a fully realized portrait. As a rule, Nadine didn’t like words on paintings. Its advent was part of a revolution in the art world that Nadine wasn’t comfortable with. While her knowledge of how and when it had occurred was sufficient, she wanted to know more about what it was like to be in the throes of those emotional interactions, the conversations, the ideas—the small gestures—that became the basis of how historians created a static imprint of that time.

In addition to the lettering across the bottom, the painting had a signature running up the right side. Nadine tipped her head. David Lester. Never heard of him, she thought, wondering if he was a resident on Denman Island that she should, in fact, look up.

It wasn’t that Nadine couldn’t enjoy music of popular interest; she did, she could, she had. Steve Miller, CCR, the Rolling Stones. Bands she liked that played on the radio in her room—when she was eight, nine or 10—but there were times when she put the dial between the stations and lay her acoustic guitar flat on her bed to tap one string with a pair of bamboo chopsticks, bouncing lightly, listening to the pop-and-fizzle on the airwaves with the resonating frequency coming back at her from the wooden hole, after the strike on a tightly wound metal string. It wasn’t a reaction to rock ‘n’ roll or deconstruction per se, but isolating frequencies and assigning them emotional characteristics was something that soothed her in a way that music that already existed could not.