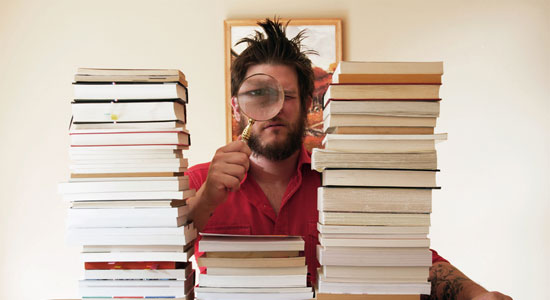 James Jackson Toth (better known by his nom de plume, Wooden Wand) and MAGNET go way back. We’ve been rabidly following his prolific, genre-eschewing career over the last decade: 100-plus records and counting, from short run seven-inches and handmade CD-Rs to major releases on some of the world’s most respected indie labels, including Kill Rock Stars, Ecstatic Peace and Young God, covering everything from the freakiest of folk to the most American rock ‘n’ roll money can buy. We’ve been lucky enough to have him as guest editor of magnetmagazine.com a couple of other times over the years, and he’s hooked us up with great mix tapes and been a constant source of great discussions about music. So when we heard that Toth was going to be hitting the road to support the re-relase of his excellent Briarwood (Fire), we knew we had to sit down and ask a few questions about the myriad irons he has in the fire. We caught up with Toth in Nashville on the first night of his tour. Toth will be guest editing magnetmagazine.com all week.

The one that’s coming out?
Late fall, yeah. [Laughs] And then this tour and Europe in July; just staying one step ahead of the creditors.

We should talk about the new record that’s coming out.
That should be the focus. [Laughs] That’s seems to be a big part of the problem, spreading myself too thin and people don’t know. It’s weird, because I get accused of being too prolific, but if you pay attention it’s the one’s with the barcodes that you can get on Amazon that are the ones you review, the ones you pay attention to. The ones that come out on tape labels in Belgium, they’re not for everybody, because by the time people go looking for them they’re out of print or maybe never came out at all. There’s people more prolific than me. Jesus, how many records did Thelonius Monk put out in a year?

Three or four at least.
But yeah, this record is an important one; it’s important one in the Wooden Wand lineage. It’s an official record, and it should be the only one. The diehards were a siphoned off a little by the archives box set.

What was that, six LPs?
Yeah, six-LP box set. There’s always a story, some split seven-inch or something. I’m going to try and make a conscious effort to go on a one-record-a-year-schedule. And this record that will be coming out in ideally October/November, I consider the record of 2012 because Briarwood actually came out November. It’s complicated. It came out really late in November and when, as you know, the ink was already drying on everybody’s top-10 lists. It was sort of a perfect-storm scenario, the Kickstarter thing kind of messed up the PR a little because the record didn’t really have a release date and all the Wooden Wand diehards–the few of them that there are–had already bought the record from me. It might not make any difference, but it’s a record that we all feel like people should hear. It’s the first Wooden Wand record that two months later I can listen to and still like it. Usually, all I hear are mistakes, and while I hear mistakes on this one, they’re the kind of joyful ebullient mistakes that you look for in a record. I still like it. I recorded more than a year ago and still like it.

Damn. I can’t think of anything I did a year ago and I’m still impressed with.
Yeah, it’s unprecedented. So anyway, we’re hoping the record gets some more attention this time around and basically rolls out the carpet for the next one, which I shouldn’t be talking too much about, because it’s so far off and I’m supposed to be promoting this one. But the next record it’s really going to be my defining work. Every other Wooden Wand has been a rehearsal for this one.

Who are you doing it with?
Fire, same label. But I feel like it’s the most representative. You know, you go in the studio–and I feel like everybody does this–and oh it’s like, ‘We’re going for Souled American meets KRS-One thing, a Royal Trux with fiddles thing,’ and this time we weren’t going for anything. We just went in with a bunch of songs, and as much as I hate the term organic, it came out very organic. It’s like that Tom Waits quote that I love and use all the time: ‘Whatever you absorb you eventually secrete.’ And it’s weird because on the way down to the studio I was listening to a lot of Coil, that sort of austere, borderline gothy stuff.

Darkwave before it was associated with crap like Cradle Of Filth.
Plus, Fraternity Records and all that shit. Darkwave when it was cool. I was listening to a lot of that stuff, and in a weird way it sort of informed the record. There’s a lot of mellotron and harmonium; there’s no snare hits on the record, not one. It’s really cool record, and I’m really excited about it. But again, I probably shouldn’t be talking about it. I’m always writing three albums ahead of what I’m supposed to be talking about. But I still like Briarwood; I think it’s a good American rock ‘n’ roll record, and that’s what I set out to make.

And you recorded that down in Alabama?
Yeah, and I did the most recent record down there, too. I probably won’t do a record, not a Wooden Wand record anyway–there are some collaborations in the future that may or may not happen–but as far as a Wooden Wand record, I can’t see wanting to do it anywhere else. It’s a perfect environment, the studio is great, the people are great.

Whose studio is it?
It’s called Ol Elegante. I don’t know if you remember Verbena.

Oh, of course!
It’s the guy from Verbena’s studio. Not [A.A.] Bondy, but Les Nuby. It’s his studio, it’s great facility. It’s got a ton of great gear, vintage analog gear, and he’s just a great engineer. The band there was capable of making Briarwood–the record we’re supposed to be talking about–which is a sort of very American, iconic rock ‘n’ roll record but they’re capable of making some pretty weird shit, which hopefully you’ll get to hear soon.

Well, they are from Alabama.
Yeah! [Laughs] Home of Sun Ra and the Alabama Shakes!

How’s Kentucky been treating you? How’s that been influencing you’re work?
It’s not. I’m in Kentucky for practical reasons, not creative ones. Kentucky has things that are nice, like whiskey, but I don’t really like basketball or horses. I’m there because my wife is in a PhD program, and once she finishes that we’re going to leave. There’s not really—I don’t want to say there isn’t a scene in Lexington, because there is–but it’s a very insular sort of noise scene. And right now what noise means is not what noise meant to us 10 years ago. Now it means John Carpenter soundtracks and poly-synths–the minimal wave thing. And I can only deal with so much of that. I’m a songwriter and I can’t really draw a crowd. So it kinda reminds me a lot of when I lived in Murfreesboro and played in Nashville: same thing! But yeah, Lexington is kind of a weird place. But it’s cool because it’s on the way to other places so we see a lot of our friends in touring bands when they play Cincinnati or Louisville or whatever. It’s easy to get other places–it’s four hours from Nashville–it’s easy to route a tour from there. But beyond that, it’s a place to keep my stuff, a place to keep the dog. I’ve got a backyard and shit.

A place to do normal human-being stuff.
Like catch up on the Netflix.

Which is a weird thing to think about being a requirement. They never mentioned in Black Flag’s liner notes, ‘Hey kids, you’re going to want to have a place to keep all your shit.’ Or even that you’d want to own shit. But it happens to all of us.
But even Henry had the shack. He had that place he could go and bitch about Kira and stuff. He needed that. Personally, I’m from New York, but I’ve never lived in a Portland or a Boston or any scene like that because to me there’s something very comforting and romantic about being “the songwriter.” Like next door’s the firefighter, this guy owns a candy store, that guy is the sanitation guy, and I’m the guy that writes the songs. Where as if you live in Brooklyn or Williamsburg, you walk outside and it’s like, “Hi, what band are you in?” “Well, I’m in this band and then there’s my solo project and then my solo project has a solo project.” It’s just a playground for the rich and beautiful. Who can create in that environment? I mean, obviously some people can. Look at Lou Reed; he’s been doing it forever. I can’t.

No, real scumbags can’t afford to live in Brooklyn.
It’s funny, as recently as a year ago I told my dad—my dad was a cop in New York during the ’70s and ’80s; Taxi Driver is basically what he dealt with—that I was playing in Williamsburg. And he was like, “Be careful down there,’ and I had to say, “Dad, I’m the toughest guy in Williamsburg; it’s nothing but trust-fund trash.”