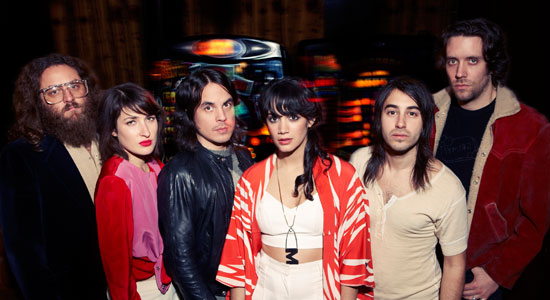 A phrase has been following New York’s Phenomenal Handclap Band ever since its 2009 debut single “15 To 20” stole the ears of those on American and European dance floors, as well as those who like to sit and get baked in front of YouTube. And despite the self-described collective having just released its second full-length, Form & Control (Tummy Touch), the expression that goes a little something like “not bad for a band that didn’t mean to be a band” is still nipping at its heels.

“Yeah, to say that initially we hadn’t planned to be a band is accurate,” says multi-instrumentalist/DJ/band leader Daniel Collás, talking to MAGNET after an evening promoting an upcoming show at a NYC radio station. “We were interested in focusing on producing. We’d all already been in bands; we’d come together as a group of people who had been in bands, specifically me and my production partner, Sean (Marquand). I wasn’t interested in playing the Lower East Side circuit anymore. I just wanted to concentrate on making records; making something lasting as opposed to hauling my ass around town and playing moderately attended shows.”

Making matters more confusing is Collás’ belief that, even though they didn’t have a band, they always were a band. When he and Marquand required session players for studio work, soundtrack scores and backing band jobs, they would generally call upon the same folks, including drummer Patrick Wood, guitarists Luke O’Malley and Nick Movshon (recently replaced by Jason Roberts) and bassist Emily Panic. “Those were our guys,” says Collás. “So, we always had a band. Sort of. But I guess we weren’t a band as far as being a touring outfit was concerned.”

Their plan to be studio hermits and prolific production whiz kids got blown out of the water when “15 To 20” took off. That the song was a hit is no surprise considering its thumping slinky beat, infectious melody and schoolyard chant ‘n’ rhyme delivered by vocalist Laura Marin. Couple that with a promo video almost designed to appeal to those who would turn up on the “Do” pages of Vice magazine’s snarky “Dos and Don’ts” guerilla fashion critiques, and the clamor to have the Phenomenal Handclap Band emerge from studio to stage was deafening. Despite having no bones admitting “15 To 20” almost didn’t make it onto the band’s self-titled debut because “we thought it was too bubblegum for the rest of the record, which we thought was a solemn prog-rock affair,” Collás is happy with the song’s success, and that the track brought the ensemble out of its shell, so to speak, igniting a move toward regular band life.

“It was a combination of the single taking off and getting invited to South by Southwest in 2009—that’s when things started to change,” he says. “Before then, we had only ever played four shows, and the original goal was not to even play regular rock venues; we wanted to play loft parties and hotels, weird stuff like that—and in the four or five days we were there, we played eight shows. We basically doubled our entire career of performances and got a lot of good press, so it was like, ‘All right, let’s try and make something out of this.’”

What’s probably most surprising to those who cottoned on to the feel-good sunshine of “15 To 20”—and most frustrating for those trying to sell the band to the public (“Yes, there was external pressure to write another single,” Collás deadpans without further elaboration)—is that when PHB decided to take advantage of its fortune, it was more so the musicians could do their own thing as opposed to falling into the neat little box everyone wanted them to collapse into. They wanted to go off on their own tangents, didn’t want to play traditional venues, and with Form & Control, the floodgates were opened in regards to the sounds and influences they were exposed to while touring the U.K., opening for Bryan Ferry stateside and continuing to produce rock, Brazilian and Latin artists while still hanging around the club and nightlife scene. The result is a second album that neatly straddles the members’ many fields of interest, combining nebulous progressive rock with soulful psychedelics and new-wave-informed disco. It’s like the Cars, Human League, Hot Chocolate, all eras of Genesis, Deee-Lite, Blondie and the Afro-Cuban All-Stars got into a multi-vehicle pile-up in that congested part of Times Square where driving becomes an afterthought because of all the pop culture advertising oppressively battling for consumers’ attention.

“We were thinking about what would make sense to follow up the first album,” Collás says about how influences old and new were culled on Form & Control. “Even though I think the first album was pretty broad and there was a common thread, a lot of people only know the singles. For us, it was about tunics, amulets, pastoral psychedelia and prog rock, but we got framed by ‘15 To 20’ and ‘Baby,’ which is like a psychedelic soul song. To follow all that up, I think we refined it by getting a little more into the pop elements and made it a little easier to digest while still adhering to the headiness of the first record.”

To that end, the band ended up overseas at London’s legendary RAK Studios, hosts to everyone from the Who and Yes to Gary Numan and Erasure. PHB spent five weeks living on the premises, surrounded by nothing but the history of U.K. pop music, gold records on the wall of RAK mastermind Mickie Most’s office, “a real spiritual vibe with a lot of ghosts hanging around,” as well as Rod Stewart and the Arctic Monkeys, who were also on-site doing their thing. They may have gone over there with only two complete songs and a bunch of ideas kicking around, but they managed to sculpt Form & Control despite being on the business end of the gun, time restrictions and the specter of the proverbial difficult second album looming in the background.

“For this record, because we had done so much and collaborated so much together in the past, we kind of wanted to keep things spontaneous and didn’t want to go into it totally written,” says Collás. “A lot of it was done there because we were there 24 hours a day for five weeks. There was a lot of, ‘OK, I’m going to get high and play on this Fender Rhodes and see what I can contribute.’ Sometimes, we find ourselves getting bored with ideas too quickly, while people are still catching up to them. I don’t mean to sound like I’m bragging, but it can be like that in a city like New York where things are happening and moving so quickly; you’re kind of in this creative circle. Sometimes people outside of that don’t get it or are slow to catch on to what’s up. We also wanted to do this record as a band—within that circle—without special guests or anything because in the two years since the first album, we’ve really grown together. It was like, ‘Let’s just do it as us and be this totally autonomous type of thing.’”

But despite the PHB’s attempts at autonomy, has it been difficult dealing with everyday band stuff, the stuff outside the music they wanted to avoid in the first place? “It’s been all right,” says Collás. “At the end of the day, it’s nice that anyone cares. It can be frustrating when you have the label and management in your ear, but at the same time, I never forget we have fans and people who want to put our record out and want it to be the best it can be. It’s humbling that people care this much about the music we’re creating. I don’t take anything for granted.”