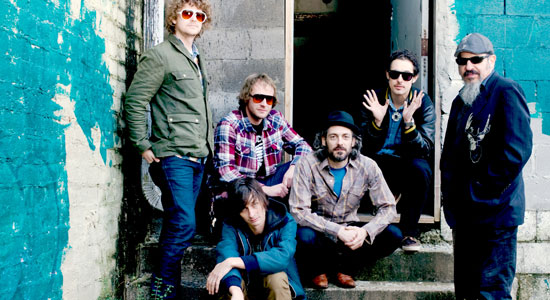 Every adventure has to start somewhere, and this particular one begins on a sleepy side street on the west side of Nashville, in one-car garage-cum-recording studio by the name of Playground Sound. In the grand scheme of things, this is ground zero for the Diamond Rugs, the spot where John McCauley was able to conscript his Deer Tick co-conspirator Robbie Crowell, Ian Saint Pé (Black Lips), Hardy Morris (Dead Confederate), former Six Finger Satellite drummer Brian Dufresne and Steve Berlin (Los Lobos) into his rock ‘n’ roll assault force.

Playground Sound is where producers Adam Landry and Justin Collins—the dudes behind the boards on Middle Brother’s debut and Deer Tick’s Divine Providence—let the tape roll on one of the best party records in decades. In a less grand sense, this is where MAGNET is meeting up with Landry and Collins to grift a ride down to Austin for South By Southwest.

It’s 1:30 a.m. when the last of equipment is loaded into the Deer Tick van—dubbed the “Party Coffin” for this trip and surprisingly containing the complete Little Women audiobook on CD—and we have one last stop to pick up mastering engineer John Baldwin before embarking on 15 hours of pavement parking. The rest of the band is meeting us in Texas, flying in from the far corners of the country and, in Crowell’s case, Canada.

Landry is behind the wheel and Collins is behind the brilliant idea to bring a case of beer. Even without the beer, the crew is already a little loopy, amped on adrenaline and anticipation, ready for a weekend of rock ‘n’ roll shenanigans. Even though everyone in the van has heard the record an innumerable amount of times—part of the handful of people nationwide that have actually heard it at all—there’s still a palpable excitement about seeing the band live. It’s kinda weird, but the Rugs are the sort of band that makes jaded folks joyful.

“I think I need to listen to the record.”

It’s Friday at 1 p.m. and Saint Pé is riding down the escalator at the Austin Convention Center, fresh off of the band’s first gig in front of an audience in more than three months, a “speed set” of three songs for a crowd of industry insiders. Saint Pé laughs, fully aware that he screwed up—nay, butchered—the lyrics to “Blue Mountains,” which devolved into a chorus of giggling halfway through. The band had been scheduled to rehearse at the Daytrotter house after it recorded a session for the venerable indie-rock website, but had been kicked out pretty much as soon as it was done. Which probably was for the best, considering that if Adam Duritz of Counting Crows—an uninvited and unexpected guest at the session—had heaped any more Twitter-praise on the Diamond Rugs that night, they might never have crawled out from under it.

But the Diamond Rugs aren’t a “tight band”; they’re loose in the best sense of the world—a group that gives every member a lot of space to make their magic, one that benefits from laying back and letting the sounds breathe. Like the best parties, this is not a formal affair. There is no ego to interfere or guide, only id; only the instincts of dudes who eat, breathe and shit rock ‘n’ roll. Which, considering the pedigree of the musicians involved, is a minor miracle.

There is no guiding principle behind Diamond Rugs, no plan, no focus, no star. Though the whole shebang might have been McCauley’s idea, the sound springs as much from the brains of the entire band, with standout tracks coming from Saint Pé (“Hightail”) and Morris (“Country Mile”). Hell, “Totally Lonely,” the insta-hit of the festival, was recorded entirely by Collins with only a chord organ and a floor-tom on a Fostex four-track cassette recorder, and even it went on the band’s self-titled debut album (on Partisan). Flubbing a few lyrics in front a room full of tastemakers is pretty much par for the course.

And fucking up in front of 15,000 people on Friday night at Austin’s expansive, open-air Auditorium Shores venue is pretty much exactly what we were expecting as well. Not that we were counting on self-sabotage, but when we walked into the massive venue and saw McCauley on the Jumbotron wearing his All Shook Down-era Paul Westerberg plaid sport coat, we knew that the Rugs were not slated for instant pop-stardom.

“We’re not an experimental band; we’re just experimenting with our band,” declared McCauley, and he wasn’t kidding. Their first full set of the festival that afternoon at Lustre Pearl had gone off without a hitch, eliciting the sort of frenzied response you would expect for one of the most hyped bands in the country.

But after an afternoon of being fawned over by Terrence Malick and Rooney Mara, playing their third show ever in front of thousands of folks expecting to see a free Counting Crows show, a grand flame-out was pretty much a guarantee. But damn was it a beautiful disaster; if there was ever a time to fuck up for the sake of rock ‘n’ roll street cred, this was it.

However much appeal this band may have—Diamond Rugs is the sort of album that gets stuck in your head for weeks on end—putting them on before one of the most milquetoast bands of the ’90s just ain’t gonna work. As one of the “Party Coffin” crew said earlier in the day while we were all stealing bottled water from a preoccupied crew of porta-potty attendants: “Have you met these guys? Getting their shit together is against the whole point.”

By the time their last set rolled around at 1 a.m. on Sunday, the Rugs had regained their sea legs, blasting through their set and sounding like the band that had been lavished with praise by Rolling Stone and the L.A. Times before the festival began. Their afternoon set at the Partisan Records party was out of control, raucous and randy, with their management and label staff beaming like proud parents; many of the people there had made it out to this late-night set. People we had seen at most every show, people who didn’t know any of the words on Friday afternoon, were chanting along and freaking out to tracks like “Hungover And Horny” and “Motherland,” losing their minds like they had been listening to this band since the dawn of time.

Audience and artists alike were losing themselves in the sound and fury of Berlin’s wailing sax, Crowell’s fuzzed-up bass and the wall of guitars, drums and vocals collectively hitting the astral plane of rock ‘n’ roll ecstasy. And then it was over. As the overworked and exhausted event staff hustled every last one of us out of the side stage area and into the alley, as the van got loaded up one last time, it dawned on us that this gang of goons was going its separate ways and our adventure was coming to a close.

But there’s already talk of summer shows and a second album, of TV appearances and potential tours. Also, there’s a party back at the hotel, because it’s only two in the morning and Diamond Rugs aren’t a band to go quietly into the night. There’s a reason these dudes have so much rock ‘n’ roll street cred.