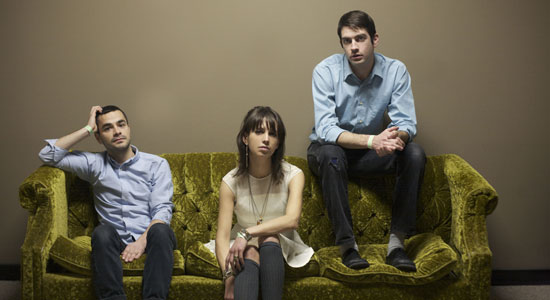 Times New Viking is an Ohio rock trio that delivers raw rock ‘n’ roll. Jumping from different labels over the years including Matador and Merge, the band has released five proper albums in a little more than five years. On its last album, Dance Equired (Merge), Times New Viking dropped the lo-fi fuzz in favor of more melodious songs. These art-school grads from Columbus, Ohio, are still making music, and the band’s Elizabeth Murphy will be guest editing magnetmagazine.com all week.

What type of music did you listen to growing up, and how’d that lead you to music?
For a long time it was Sesame Street Gold! with the punk anthem “I’m Mad” being my go-to. I can remember my first favorite songs off the radio being “Let My Love Open The Door” by Pete Townsend, “If I Could Turn Back Time” by Cher and “We Didn’t Start The Fire” by Billy Joel. My frame of reference then extended to my dad’s record collection, which had long been banished to the basement, and I discerned that Led Zeppelin was good, the cover of the Nice’s Ars Longa Vita Brevis was really cool, I wanted nothing to do with Uriah Heep, and Captain Beefheart’s Trout Mask Replica was out of place in this collection. Quickly I became obsessed with Bob Dylan’s words, and starting with “Subterranean Homesick Blues” I would transcribe all of his lyrics. In high school, I listened to rap and classic rock, namely more Led Zeppelin and Wu-Tang Clan. Outside of a getting Built To Spill’s There’s Nothing Wrong With Love in seventh grade from a chance encounter with “Big Dipper” at camp, I didn’t hear any of what we call indie rock until I went to art school at 18. From there, my musical frame of reference exploded. I had always loved music and I was now around a bunch of other kids who did as well, with a much wider knowledge base. The Fall and Guided By Voices had a huge impact, becoming quick and lasting favorites. I was becoming aware of the musical fortitude from my hometown Columbus, Ohio, as well, finding inspiration from Jim Shepard/V-3 above all. I would say a second musical awakening unfolded in 2003, when we got together as a band, as we got compared to New Zealand bands that none of us were too familiar with at the time and delved into the Siltbreeze discography. The Messthetics compilations that Chuck Warner puts out also had a huge impact on us as a band.

You met the rest of the band in art school. What’s the story behind that?
We met at Columbus College of Art and Design. Adam and Jared had been in a band together prior to Times New Viking called the Offending Instruments. When that band broke up because one of the guys moved to New York, Adam and Jared kept playing music together in their basement, both wanting to start another band. They had a couple zygotes of songs, and I was dating Jared at the time, so I was always around. I ended up being in the band because I liked the name, which they conceived in a bookmaking class. The courage to start playing music untrained came from hearing the Raincoats and a particular quote that was something along the lines of how you should never choose a medium you are too comfortable with because it is inauthentic. I was completely uncomfortable playing music in the basement and on any kind of stage at the onset of Times New Viking. I think the guys liked having a wild-card element in the band, and maybe a chick, too. But honestly, the three of us had very like minds as far as what we thought was funny, what visual art we liked and the music we liked as well. We formed a little gang. A band should always be a gang. The rules were: To be democratic, what we called 300 percent creative control. Two, no songs about food, and three, no shorts on stage … for the guys. It worked well.

What did you study in art school?
We were all three printmaking majors but rooted in the conceptual nature of it rather than practicing archaic forms. Most of our work went no farther back than the Xerox machine as far as process. I convinced Jared’s mom to get him a giant Xerox machine for Christmas one year, and we wore that thing out before it became furniture, broken from too many photocopies of people’s faces, from too many house parties. As we neared graduation, and post-college there were a lot of new bands starting in Columbus, which mostly can be traced back using Columbus Discount Records catalogue. Adam Smith and BJ Holesapple started this label and recording studio that provided a coherence to what was going on. We all played shows together and learned how to drink together.

How did starting out in a college town shape your bands style?
The Columbus noise scene also proved very welcoming to our band. We would play at BLD in Columbus and got to be the weirdest band on the lineup because we played songs. The noise people were just smart art students like us, so they got it. In some ways we were even more at home there than in the dive bars with sound guys. But the CDR relationship was a touchstone, because those guys knew Ohio rock history, and for that there was a kinship. Even to this day, Columbus espouses a local-music camaraderie, for better or worse, that will always be aware of the antecedents in which they are proud to be drinking the same water as. It is on this note that I suppose we came to be known as a lo-fi band. A lot of music that came out of Columbus and Ohio in general had that sound, not as affect, but just the way it was done. We thought that was how our band should sound and it is also what technically came easiest for us. We knew how to work a four-track or a cassette deck, and when we played our songs back in this manner, they sounded right. There was never a concerted effort to sound a certain way and never a conversation about it; it is just what came natural. This sounds like we were operating in a cave, closed off to the world, and in some ways we were. Because at first we never had an inkling that anyone outside this cave would ever hear us, so it didn’t matter.

How did Times New Viking get exposure coming from mid-Ohio?
Dig Yourself, our first record, was released by Siltbreeze in 2005. It was basically the We Were High, We Were Not High CD-R we had self-released to appease Adam’s brother and two other fans we had in Columbus. A local scenester named John Michael was one of these fans, and he gave it to Mike Rep of Mike Rep And The Quotas fame. Rep played the songs to Tom Lax of Siltbreeze late one night, and whatever concoction of rare meat and spirits he had ingested that night worked to paint our little demo worthy of starting up his legendary label again after a few years hiatus. After Dig Yourself came Present The Paisley Reich, also on Siltbreeze, and some national touring. All this led up to an intense battle between two major indie labels to win our favor (the loser shall remain nameless), and we found ourselves signing to Matador Records in 2008. Holy shit. This blew our fragile Midwest minds. It was with the Matador record, Rip It Off, that we became known on a wider scale; Pitchfork recognized us, even giving us the coveted Best New Music, and we had our 15 minutes, even playing Siren and Pitchfork festival in one weekend! It took at least a year for the obligatory hype-based attendees to loose interest, but after the fall-out we found ourselves in the company of a quality, somewhat wider, fanbase consisting largely of older dudes. So when you ask me what touring with the Clean was like, as they are an older band, well, we wouldn’t have it any other way. We are a “band’s band” and have found ourselves on tour with Yo La Tengo, Guided By Voices, The Breeders, Wild Flag and Superchunk amongst others, and refer to these folks with varying degrees of friendships at hand.

Dancer Equired sounds a lot cleaner, production-value wise, than the previous Times New Viking recordings. It’s less lo-fi sounding. Why did you make that decision?
We finally thought to record in a proper studio and see if we couldn’t allow for the songs to be seen as we see them, without the guise of “lo-fi” even an option as a talking point. We went to an old studio that was a stone’s throw from where we all lived in Columbus called Musicol and had Adam Smith of CD-R engineer the recording. It was the exact change of pace we needed, process and output-wise. Dancer Equired was recorded in about a week, and we all showed up for it in full. Much like the fact that we would now allow for a studio and engineer, as long as it was in Columbus and an old friend, the album title was resurrected from the bottom of our giant cardboard box of original ideas, all captured by way of analogue workmanship: cut, paste, highlight, Xerox. First seen on the insert of that We Were High, We Were Not High CD-R as the deliberate “attendance required,” the statement had re-arranged itself in it’s paper burial, six years later claiming absurdity as our fourth member, not the audience. Like my friend Adam Elliott says, “In the midst of nuclear war, the poems will recite themselves.”

How do you guys write songs?
As far as our songwriting process goes, we are lucky that it still follows this analogue way of thinking, as well as the democracy we posited as our first rule. And for the record, we would have more to say about being a band rooted in analog than any question leading us to absolve lo-fi.

Are you working on new material?
Although I now live in Memphis, while Adam and Jared reside in Columbus, we have been working on an EP, in which we are all going home, as it will be released soon on Stillbreeze Records. It is going to be called Over & Over. I think.