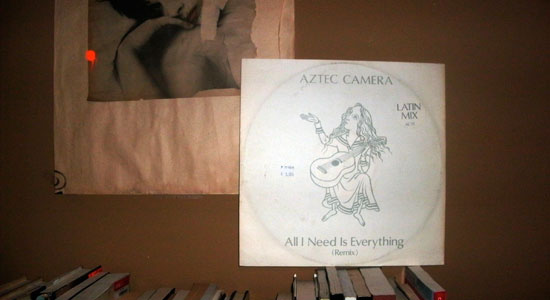 Murphy: On paper, this song has nothing going for it. The B-side of a 12-inch remix single by Aztec Camera in which they cover Van Halen’s “Jump.” But there is something very special about this song.

Van Halen‘s “Jump” was released in 1984 on the album 1984 and reached number one on the Billboard Hot 100 list. The only song of Van Halen’s to reach number one, it also marked the band’s transition from David Lee Roth-fronted hard rock to adult contemporary pop. For all its lyrical content, there was nothing in the original that spoke to inspire a jump of any kind. Written by Eddie Van Halen, it was upon his insistence that the song feature the synthesizer front and center and although he threw in 20 seconds of his canned shredding near the end, it was this new instrument’s conspicuous presence that rolled Van Halen into synth-pop full-blown mainstream success. In spite of commercial success, this was a push, an acquiescent fall… a jump? No.

It was this same year that Aztec Camera released “Jump” as the b-side to their single “All I Need Is Everything.” For purposes here, I am only referring to the remix album version, in which “Jump” is labeled as the “Loaded Version.” It is precisely the “loaded” part that makes my point (and makes the song for that matter). Aztec Camera is essentially Roddy Frame, and up until this point in his career, I would say that there had been one other song of note, interestingly also a b-side, “We Could Send Letters,” from his first seven-inch. Although this song had a hook and was pleasant enough, nothing in it or anything after would lead one to think the man had it in him to raise a hair on one’s neck as he does in the last two minutes of his rendition of “Jump.” After the duration of song proper (and covered as you would expect a proper Scot to pay homage) a shrill guitar sneaks in, riding the tails of a few thrusting wails of volume. Before you know it, you are smacked with a powerful, original, note-bending guitar solo by Frame, augmented by the band’s increasing intensity that transcends everything put in place before it to allow for its existence. It is a liturgy to the gloriousness of Van Halen’s past that pays due diligence to anything the lyrics may imply, served with a little smirk from the shy guy behind Aztec Camera. It is only too bad that we only get this intensity when Frame is pretending to be someone else.

I agree that the guitar solo at the end of the “Loaded Version” of A.C.’s cover of “Jump” is pretty killer. It reminds me a little of J Mascis’s soloing on early Dino Jr. albums.

On a side note, the YouTube link that Magnet provided at the end of the article links to the A-side (“All I need is Everything), rather than to “Jump”. The word “song” at the beginning of the article does link to the correct video, though.