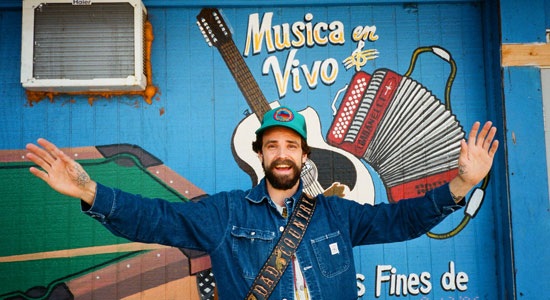 “John Turner, Those Darlins’ manager, and I were having lunch the other day, and he told me that 2013 is the year of the baker’s dozen—you can expect a little bit more. I really, really liked that. And so far it’s been pretty true.”

Jonny Fritz is in Nashville, a week or so before he hits the road for another stretch of what has become a never-ending tour. His sardonic, clever country rock has just landed him a record deal—signed in gravy at a local soul-food restaurant, natch—and his ATO Records debut, Dad Country, featuring backing from the boys in Dawes, will have hit shelves by the time you read this. He’s also trying to finish up paintings and leatherwork for a list of clients that reads like a who’s-who of the Music City hipsterati. Oh, and he got married to a woman he met at Mardi Gras.

“I like to make the impulsive moves,” says Fritz, who used to go by the moniker Jonny Corndawg. His voice is hyper, excitable, overwhelmed, but energized by that “little bit more.” He’s hyper-aware of the road’s less, um, glamorous perks—Dad Country’s “Goodbye Summer” is a country-shuffle answer to Get In The Van, and “Fever Dreams” is a spiritual cousin to both Screamin’ Jay Hawkins’ “Constipation Blues” and Bob Seger’s “Turn The Page.” You can hear how anxious he is for people to hear the album, play it for them live after they’ve had a chance to listen to it. He’s been sitting on the record long enough, and he’s ready to get out there. Fritz is a wry road warrior, a working-class bard whose travels are—in that most country of traditions—at the core of his art.

“I like big cities and super-small towns,” he says. “In those towns, when they appreciate it—if they appreciate it—they fucking love it and they never let you forget it. It’s so sincere. There’s something about it, you feel like you’re doing a service.”

It’s that joy that underscores Fritz’s gentle ribbing of music culture on the country-blues “Suck In” (“Suck in your gut/And don’t let it go to your head”) and the pedal-steel swoon of “Social Climbers” (“Nobody’s going to let you forget who they are”), making them more roast than indictment. Fritz’s greatest strength as a songwriter is his ability to state the absurdity of a situation in the most economical manner possible, creating lean and muscular tracks built for the long haul and the heavy load. Perfect for delivering that little bit more that your record collection has been looking for.