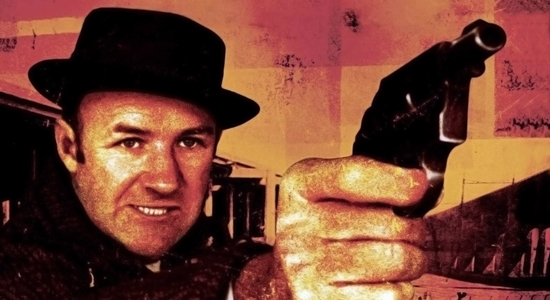 Gene Hackman and Dustin Hoffman, so the legend goes, were both voted “least likely to succeed” by their classmates at the Pasadena Playhouse in the late ’50s. They couldn’t have got it more wrong. Hoffman slept on the floor of Hackman’s one-bedroom apartment when the pair moved to New York to look for acting jobs. Working as a hotel doorman, Hackman bumped into an old instructor who reaffirmed his opinion that his former student “wouldn’t amount to anything.”

If Popeye Doyle, the roughhouse NYPD drug-enforcement cop Hackman plays in The French Connection, had heard those disparaging remarks, he would have spun the smart-ass prof around, taken him to the floor, kneed him in the back and cuffed him before he could count to five. Sporting his trademark pork-pie hat, Doyle lets nothing stand in the way of his pursuit of heroin traffickers, even the laws he has sworn to uphold.

With more than 100 narcotics busts the previous year, Popeye and  partner Cloudy Russo (Roy Scheider) burst into a NYC dive frequented by African-Americans. “All right, Popeye’s here!” announces Doyle. “Get your hands on your head and move to the wall!” As the crowd slowly obeys, a symphony of pill bottles and small bags of pot cascades to the floor. “We told you people we’re gonna keep comin’ back until you clean this place up!” says Popeye. Walking the length of the bar, he flicks more pill bottles from the ledge underneath. “What is this, some kinda hospital here?” he mutters, disappointed at the small potatoes he’s digging up.

“You wanna take a ride there, fat man?” Doyle barks at one customer as he ushers two more to the back of the room. “You’re both under arrest! Put your hands against the wall and lock yourselves in,” he says, shoving the well-dressed pair into neighboring phone booths. “You there, haircut, over here!” says Popeye to a man in a large afro. “I’m not gonna get stuck, am I?” he demands, wary of a hypodermic, as he searches the man’s back pockets. The suspect grumbles at the rough treatment, and Popeye retorts, “I’ll kick your muthafuckin’ ass!” as he shoves him into the restroom.

“How come there’s nuthin’ out there?” inquires Popeye more politely of the black undercover cop while they’re both taking a leak where their conversation can’t be overheard. “Ain’t nothing around. Nobody’s holding,” says the plant. “But there’s been talk of a big shipment coming in next week. Everybody’s gonna get well.” The hot tip leads Popeye and Cloudy directly to Brooklyn where they tail Sal Boca, a man with mob connections, who meets attorney Joel Weinstock at the Copacabana. What’s rumored to be a mammoth shipment worth $32 million on the street could make the months spent on legwork pay off handsomely.