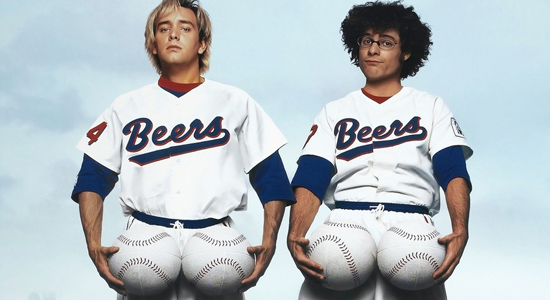 Cain: Matt Parker and Trey Stone are geniuses, yes. But it didn’t take Book Of Mormon to prove that. No, the writing was all over the wall way back in 1998, when Parker and Stone collaborated with director David Zucker to create BASEketball, an essential American comedy. Most of the superficialities of the film’s plot aim to skewer modern-day professional sports, in all their cynical, cash-driven putrescence. That stuff’s all a bit on the nose. The magic is in Parker and Stone’s line delivery, and in the wonderful dialog they clearly red-inked onto Zucker’s script, none of which deals with sports. Here they are fighting over a girl, one who works with sick kids at a hospital:

Stone: Oh, I’ll come, I love hospitals.
Parker: No you don’t, you love Taco Bell!
Stone: No, one time I was at this hospital, in France, and I met this great chick.
Parker: Dude, that was a hostel.

This is the stuff of life. Rent BASEketball today. And if you’re a member of the American Film Institute, use your vote to help this treasure achieve the spot it deserves in your organization’s list of the 100 Best American Comedies—somewhere in the top four, surely.