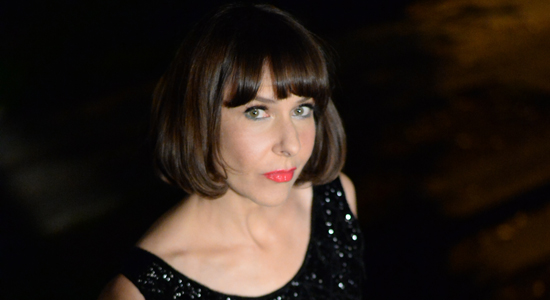 After nine albums of sterling folk/pop/rock—and all the extremes along that continuum, including the jaunty Van Dyke Parksian swing of last year’s Let’s Fly A Kite—and reams of critical acclaim, singer/songwriter Eleni Mandell had no need to alter her creative methodology. A chance stroll through the history of country music in the cradle of its development gave Mandell the blazingly clear vision to simplify her process on what would become Dark Lights Up, her 10th album.

“The last time we were in Nashville was the first time I’d ever been to the Country Music Hall of Fame or any of those kinds of attractions,” says Mandell. “And I was really struck by how influential that music has been for me, even though I would always cite Tom Waits and X as my biggest influences because I was wanting to emulate them as a teenager. Seeing Dolly Parton’s notebook with ‘Jolene’ written on it, Buck Owens’ Nudie suits, Marty Robbins’ guitar—which is the same model I play—and Hank Williams’ suit, I was just blown away. People say they don’t like country music, and I think what they mean is they don’t like contemporary country music. To me, country music is so American, and the stories and songs are so great. There’s a simplicity that I love.”

Mandell’s country affection stretches back to the standard childhood exposure, and while the influence has only been tangentially reflected in her previous work, it’s almost directly channeled on Dark Lights Up. She credits her four-year-old twins with that immediate resurgence.

“I’ve been a big fan of classic country music for a very long time; I don’t know when it started, but it’s almost all I listen to anymore, partly because I got my kids into it,” says Mandell. “So, we’re either listening to Buck Owens or Roger Miller in the car, to the point that I’m really hoping I can move them on to some George Jones. We have burned through these records.

“I was just amazed by how big his records sounded, and yet how the instrumentation was so simple. That was really what inspired me.”

Mandell cut Dark Lights Up in a mere four days in Sheldon Gomberg’s Silver Lake studio; her crack band. including Bright Eyes pianist Nate Walcott, utilized nothing but acoustic instruments and played in the same room. Further inspired, Mandell acted as her own producer for the first time, with occasional assistance from Gomberg. And yet, even as she taps into a rich internal vein of country influence, Dark Lights Up remains an identifiable part of Mandell’s brilliant canon.

“I wasn’t trying to write Country Hall of Fame music,” says Mandell. “I was just writing what I write, with the filter of the decision to record it very simply with acoustic instruments, quickly and very live. For me, it felt more organic and intimate.”