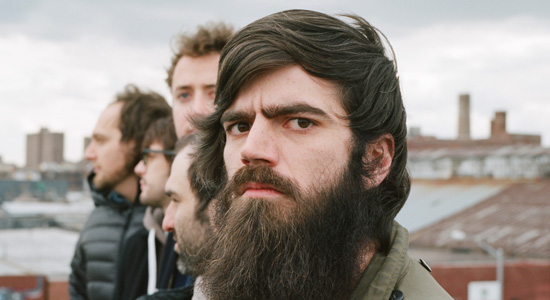 Patrick Stickles is a talker. Prolix and expansive, he wants (and takes) time to explain his case for Titus Andronicus—his Fucked Up-meets-Springsteen-ish band of gypsies—for his wide-ranging influences, his time in New Jersey and his headaches (literal and figurative) with being manic depressive.

“I appreciate a truly captive audience,” says Stickles, not so much laughing at any lurid double entendre, but just that he’s able to talk through the mess and the majesty of coming up long on a series of albums that are always more encyclopedic and densely verbose than short story-like and small-talky.

It’s no wonder, then, that he’s finally made a multi-record rock opera, The Most Lamentable Tragedy, an in-depth narrative in five acts about one good character (and his menacing doppelgänger) trying to do right by everyone and everything—from his family to his lovers—but remaining dumbstruck by drugs, mental illness and internal struggles between the two. “Conflict is essential to this, as that’s what was in my head,” he says.

Ultimately, both sides clash, and neither the battle or its result is pretty. “That’s about right,” says Stickles when that summation is posed. “Nobody wins, even if there is some sort of accord at the end.”

If elements of Lamentable Tragedy seem as if they’ve been inspired by Lou Reed’s arch Berlin, that’s a compliment to Stickles, as the Velvet man is a constant inspiration (“he appreciated the high art of Stravinsky and Delmore Schwartz, as well as Dion And The Belmonts”), and Berlin is Stickles’ favorite concept album.

“It’s a chilling, but compassionate portrait of a troubled love affair,” says Stickles of Berlin’s two lost souls striving for transcendence, “but brought low by their own weakness and the depravity of the urban jungle, dragged from the ecstatic flush of new romance into a quagmire of drugs, moral bankruptcy, familial dissolution and violent suicide. In other words, standard fare by this point for the young Reed, who found, in 1973, that he wasn’t as young as he once was, displaying a new urgency to make good on his long-professed ambitions to elevate his art to the level of Joyce or Dostoevsky.”

It’s not as if The Most Lamentable Tragedy is totally fictional or totally autobiographical (“it’s not that black and white,” assures Stickles), but is a good solid slate gray. Also, it’s not as if Lamentable Tragedy is Stickles’ first shot at grand conceptualism. 2010’s The Monitor—named for a naval battleship of the late 1800s—was loosely about the Civil War and sounded like a Daguerreotype Replacements for its efforts, especially its epically ragged and rousing closer, “The Battle Of Hampton Roads.” This is not your standard Civil War reenactor fare, however, and listeners have found it hard to detect the epaulets, the sideburns or the usual grays and blues in its Southern and Northern temperament. “There’s no battle of Vicksburg here,” says Stickles.

In regard to The Monitor’s conceptualism, Stickles states that its through-line isn’t as well-defined as on Lamentable Tragedy, that its track listing is malleable (“you could move them around in any order”), as opposed to his new rock opera’s structure. “I was a younger guy then, too. Conceptualism was not completely in my grasp.”

Apparently, many things would eventually fall from Stickles’ grasp around that time. By 2011, the Titus Andronicus leader went through what he calls “hard experiences with serious consequences that, when better illuminated, turned out to be that I was manic depressive. There were hard times when I was down, way down, and others when I was way, way up.”

It’s not as if he had never recognized his towering, guttering emotional roller coaster ride before. It was just that, by 2011, the bad times were severe.

“Nothing felt good,” he says. “By 2012, I had seriously burnt through too much serotonin because of some of the meds that I had been on, and went into a deep-set depression that lasted a long time.” There was music he was supposed to record and tried to record, but as he suffered “some real blows to my nervous system,” a lot of what would have come out like a fire hose’s blunt force trickled out like an old rusty faucet’s drip. “The record got made,” says Stickles of Local Business, an album that, in any relistening, makes you evaluate your own sense of psychological friction with the decidedly unfunny “Food Fight!” and the painfully literal “My Eating Disorder.” Stickles says under his breath that it was hard to do, that he was in a dark place.

Oddly, Stickles never fulminates a sense of woe-is-me rumination, a pitiable feeling of being sick, but instead, seems to look at his old malaise and its continued struggles (or at least sound it out) sarcastically; a this-is-what-it-is, nasally-attacked shtick that is part of the Titus Andronicus monologue, a necessary piece of the puzzle. Richard Lewis he ain’t. He’s frank about being sick.

Stickles just isn’t boringly blocked up over having been sick. Holed up in his parents’ house in New Jersey, he tried to pull a Brian Wilson and stay in bed (“not the best idea; not New Jersey, or bed”), but there were obligations in 2012’s Local Business and its promotional efforts. “That was a painful slog, even though the shows were cool and the record sounds great,” says Stickles.

After that tour, rather than return to New Jersey and the (dis)comforts of home, Stickles rented a tiny “cubicle” of an apartment in East Williamsburg, where he shared bathroom time and space with junkies and metal bands who practiced in the same building. “I watched the complete Cheers series in that cubicle,” he says. He talks about hooking up with the Brooklyn community of musicians and mess-heads as a positive affirmation of sorts, yet it was the isolation that seemed to help most; being apart from everyone but Kelsey Grammer and Ted Danson (“No, I don’t think I can tell you why I liked Cheers or how it worked,” he says, “but it did”).

So did the onset of 2013’s spring reawakening, a new relationship, and a tour with the So So Glos. “Rock ‘n’ roll sounded like fun again,” says Stickles, “and I thought maybe I should write that sad-ass rock opera that I had once promised myself that I would write about my experiences.”

Through the drop and jump of his mental state, Stickles knew that his tale of mopey woe-and-wow could make a worthwhile, smartly literary, semi-fictional epic once he got the will to create back in check; “that it would be the thrill-ride of a lifetime—this emotional roller coaster, this mad manic-depressive thing. The crashing, the cresting, the sounds and images in my head. It all seemed like a piece of art as it was happening. That was the nicest part of all of it.”

Stickles calls The Most Lamentable Tragedy a mostly fictional work—its difficult thought processes, easy temptations and uncomfortable relationship headaches all easily relatable to those who had anything to lament—but one exploded by magic reality and stuffed to the gills and confirmed/affirmed by all of his own stultifying experiences. Still, there is a way out.

“The protagonist of Lamentable Tragedy is definitely and obviously me,” he says, “but I would not call it at all autobiographical.”

Ask why Stickles couldn’t just write a book detailing his psychic fugue and its discontent, and he says something penned in novel form would have been too real (“maybe too real”) and too specific. “Having it be a rock opera allows me to fill in a lot of … you don’t have to say everything or express every emotion in words. You could do it with a riff or a guitar solo.”

Along with being unable to put all of what he experienced into book form, Stickles also knew definitively that his Most Lamentable Tragedy could not be told as clearly and cleanly as it had to be if not for the possibility of multiple frames across several albums.

“This could not be done on one CD or LP in 40 minutes,” says Stickles, like a pro. “This was going to have to take some time.” See, he needs that option of stretching out—of “some time”—in order to make sure he gets his point across, if he has to make it malleable and manipulative to do so.

Take “Dimed Out,” a song from his Tragedy’s second act, orated by the mad, bad doppelgänger and meant to portray (we think) the manic edge of making music (“any art really,” he says) and living life to its fullest. Stickles states that, like any good schemer/controller with a curatorial edge, he wanted to make a set of experiences for the listener that he had total say over.

“I sought to make you feel good here and bad over there, to twist and tease you. On that song, I wanted people to see how everything good is possible—that you can party all night and stay up through the afternoon—without showing off the consequences. Yet,” says Stickles in a cartoonishly mean manner where you can almost see him twirling his mustache like Snidely Whiplash. “I can’t make you feel bad unless I’ve made you feel good. You need torture combined with needed uplift. Hopeful feelings and hate. Gloom and greatness. Appropriate emotional counterweights.”

What Stickles doesn’t want is to seem like via The Most Lamentable Tragedy is any kind of a hero onstage (“that’s just corny”) or as if he’s making a conversation out of his internal soliloquies. “Characters don’t feel that way,” he says. “When bands in rock operas do that back-and-forth thing, that just comes across as stupid. Who needs more stupid?”