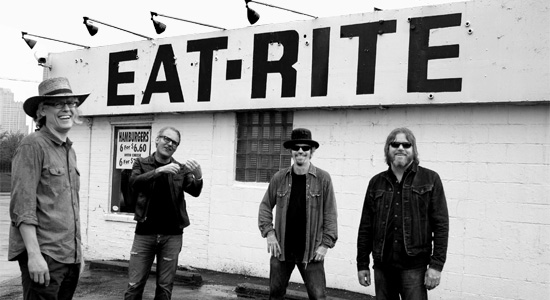 How a Rickenbacker 12-string extended the Bottle Rockets’ longevity

The Bottle Rockets have been playing their gritty brand of roots rock and Americana before those genres were invented. Their mix of blazing rock, folky working-class lyrics and blistering country licks deployed at earthshaking volume has been filling clubs since the mid-’90s. In an attempt to characterize their sound, writers would often use odd similes, à la “sounds like Woody Guthrie fronting Lynyrd Skynyrd.” Rockets’ lead singer and main songwriter Brian Henneman laughs at the comparison. “I haven’t heard that one before,” he says. “My favorite is, ‘John Prine singing with Crazy Horse,’ but they’re odd combos any way you put it.

“Maybe the style we play didn’t get categorized until after we came around, but it’s been around a long time. CCR, Rank & File and the Long Riders all played an amalgamation of country, rock, blues and R&B. They all thought they’d discovered something unique. When I heard Jason & The Scorchers, I went, ‘Oh my God, punk rock and country together,’ but original rock ‘n’ roll had the same combination of country and blues, black and white music together. Every generation thinks they’re the first ones to discover it.”

On their new album, South Broadway Athletic Club, the Bottle Rockets continue to play tough, gritty rock ‘n’ roll and explore the triumphs and tragedies of the America most of us live in. The songs are marked by soaring guitars, solid, sweat-inducing rhythms and uplifting, singalong choruses that never turn away from the realities of working class life.

“I’m the kind of guy that can smell bullshit a mile away,” says Henneman. “I always thought it would be best to write songs about stuff close to me. In the early days, it was my hometown, then the people in my neighborhood. These days, I mostly write about what’s going on inside my head, but I never had any grandiose dreams of being a rock star. As a band, we’ve never sunk to any lows or reached any stupendous heights; we just play music we like because we’ve got to. Maybe that’s the secret of keeping a band together.”

South Broadway is the first album of new songs the group has recorded since 2009’s Lean Forward, and it’s got a bright, forceful sound, due in part to Henneman’s rediscovery of the Rickenbacker 12-string guitar. “I was in the middle of a bad writer’s block,” he says. “I’ve switched guitars in the past when I got stuck, but it didn’t seem to work. I tried a Fender Telecaster and put together some hot-shit guitar licks, but I couldn’t seem to formulate a song on it. I thought I was braindead. Then I picked up the Rickenbacker. As soon as I played the 12-string, I started coming up with stuff. I’d plug it into the voice memo on my iPhone and write some words on my computer, and as soon as one was done, another one would pop out. That guitar inspired the whole album—songs just kept flying out of it.”