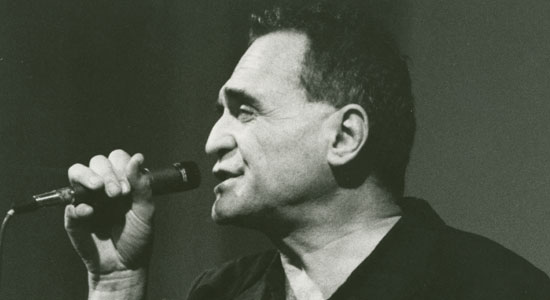 To say John Giorno is a gentleman, and a much-adored one at that, is an understatement of mammoth proportions. What other painter, poet or performance artist has had an entire town—New York City, yet—show its appreciation with a season-long celebration in galleries, museums and performance venues? What other recording artist, at 80, is digging into his crates for a lost-tapes, band-archival album like the newly released I’m Rock Hard?

“It’s all very wonderful and, yes, a little strange as I never felt accepted,” says Giorno in his familiar raspy voice. “I’m an artist who’s a poet and vice versa, and no institution ever got me. I’ve been performing for over 50 years, to say nothing of the LPs and videos I was releasing. In the passing of years, I’ve made many fans, but it was never institutional.”

The creation of the phone-answering-machine-based Dial-A-Poem and Giorno Poetry Systems—the latter a label whose albums featured the earliest works of Laurie Anderson, Lydia Lunch and Giorno himself, with a greater focus on Beat Generation lions-in-winter Allen Ginsberg and William S. Burroughs—all came from being in the Pop Art world of the early ’60s in NYC, where Warhol was a mentor and a paramour. “We all did our thing, but, it was very communal then,” says Giorno. “If you had a great idea, usually you could make it happen.”

Making sound compositions from his poems—inspired by collaborators such as synth avatar Bob Moog and conceptual collage artist Brion Gysin—found Giorno focused on a new style of performance poetry: rhythmic, repetitive, cut-up and done in a lofty cadence and chant-like manner whose vision was in league with his own spiritual/Buddhist path. “I didn’t know what I was doing when I first did it,” he says. “I had rubber-band legs and weak knees, forced the air out, and did it. It’s heat, breath and panic.”’

Giorno wanted to upgrade poetry as a multimedia performance rather than see poems simply die on the vine of print. He put it on the phone, 24 albums and a handful of videos, featuring his friends or his own voice.

As he was untrained as an actor or musician, Giorno’s performance poetry simply came from the heart, his wild energies and Tibetan Buddhism’s fierce goddess of passion, Tummo. “It’s about using the breath inside your central channels,” he says. “It works on a downward scale, their flow. When I write a poem, I’m rehearsing it vocally as I’m writing it. The musical qualities come out more, and I rehearse it every day. It’s a long process, like an annotated musical score.”

When punk appeared in 1975—from Patti Smith and Lenny Kaye’s first gleanings to Thurston Moore and the early no-wave players—its practitioners took a shine to Giorno, the performer and label owner they had known from poetry circles. “It was a very small scene,” he says. “And what impressed them was that much of my performance poetry had as much energy—if not more—than their music. I really thought I should start a band.”

So he did—first with Ned Sublette, Pat Irwin and David Van Tieghem, then a second band with Lenny Kaye and C.P. Roth. “But I did it as a poet, not like someone who wrote pop songs,” he says, recalling 24-track studio sessions and events at Danceteria, CBGB and the Mudd Club. The members all followed each other, rather than Giorno following his bandmates; today, the poet laughs about how the music jumped from punk to industrial to noise. “I got sucked up into their energy,” he says. “My solos were like their solos: loud.”

As heard on the just-discovered tapes of I’m Rock Hard—nine songs recorded between 1982 and 1989 and released by The Vinyl Factory/Red Bull Arts New York on two vinyl albums—Giorno is a whirling dervish on tracks such as “It’s A Mistake To Think You’re Special” and “I Gambled With My Anger And Lost.” Discovered by Ugo Rondinone (his husband and the man behind this year’s I ♥ John Giorno exhibition in NYC), the material is a revelation to both men. “Ugo didn’t know about the rock songs or how big and hard they sound,” says Giorno. “I was so happy that he stumbled onto them. I forgot how rough they were.”

And for fans of Giorno Poetry Systems’ albums, the poet may have one giant plan for his wealth of releases. “I found cartons of all of the albums, CDs and videos, still in shrink wrap, and might just turn them into an art object,” he says. “It’s something I always wanted to do—yet another thing for the future.”