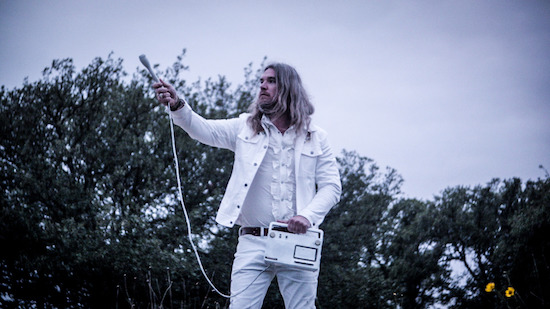 “Rolling On” is the first single and leadoff track to Israel Nash’s fifth album, Lifted, due out July 27 on Desert Folklore/Thirty Tigers. The ethereal ode to perseverance neatly encapsulates the ambitious sonic direction and pronounced optimism of the LP as a whole, which marries the steel-guitar-drenched psychedelic country/folk vibe of his last two releases with layers of echoey ’60s-pop classicism.

“I was diggin’ hard on Phil Spector’s wall-of-sound records and creating all of these expansive layers and sounds,” says Nash from the Texas Hill Country studio compound where he lives and records. “This record is supposed to be a space for the heart to beat.”

Easily Nash’s most effusive album to date, Lifted incorporates found sounds and field recordings from his Dripping Springs ranch—drums played in rain-collection tanks, water rushing against limestone, storms rolling in, frogs, crickets, even a rattlesnake. “I made all these field recordings, just hunting for sounds of the land,” says Nash. “I wanted to paint soundscapes and cues that reflect the space the album was made in.”

“We were able to capture this panoramic sonic picture of the land and countryside where I live with my family, where I creates,” says Nash. “The place I call home.”

We are proud to premiere “Rolling On” today on magnetmagazine.com. Check it out now, and catch Nash live in July and August (dates below).