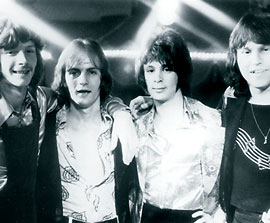 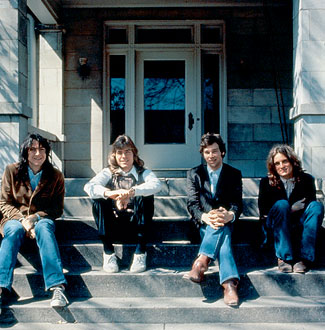 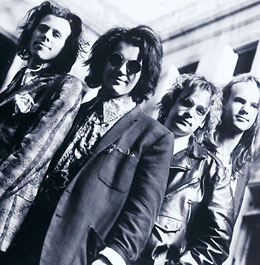 STEVE ALBINI
The bands you mention (Big Star, Raspberries, Flamin’ Groovies, Cheap Trick, Dwight Twilley, Shoes, dB’s, Matthew Sweet, Posies) are utterly unrelated. I can tolerate some of them, love the Flamin’ Groovies and Cheap Trick and have a profound hatred of the rest. I cannot bring myself to use the term “power pop.” Catchy, mock-descriptive terms are for dilettantes and journalists. I guess you could say I think this music is for pussies and should be stopped.

JOSH BERWANGER, THE ANNIVERSARY
“Open My Eyes,” the Nazz
In today’s music world, how you look seems to be more important than the music you play. The Nazz dressed cooler than most and played music that sounded as cool as they looked. “Open My Eyes,” the title track on their debut, is a power-pop song that expands the boundaries before the boundaries were set. Great riff, great percussion and a great style.

JEFF CLOUD, STARFLYER 59
“Valerie Loves Me,” Material Issue
It exemplifies the era of power pop that I come from. KROQ in Los Angeles used to never stop playing the blasted thing.

BRITT DANIEL, SPOON
“Yes It’s True,” Flamin’ Groovies
I bought my first Groovies album when I was 18 because I’d seen their name in The Trouser Press Record Guide and was into the idea of being able to tell people I owned a record called Teenage Head. And I liked it, but it surprised me because it sounded like an American Rolling Stones—I was expecting a pop record. Then a couple years later, I heard Shake Some Action, and it all made a lot more sense. Shake Some Action is all pop songs with chiming guitars, recorded by Dave Edmunds just after the band had relocated to England. My favorite song is “Yes It’s True” because of the weird drum beat and the great two-part harmonies that sound so calm and collected as they’re singing words so sad.

STEVEN DROZD, THE FLAMING LIPS
“Hello It’s Me” And “Open My Eyes,” the Nazz
While I love Todd Rundgren’s version of “Hello It’s Me” on Something/ Anything?, the Nazz version is really kickass; it’s weird, mellow, Beach Boys-esque. And “Open My Eyes”—I always picture a ‘60s drug film with the camera zooming in and out really fast while there’s some crazy dancing.

IRA KAPLAN, YO LA TENGO
“I Want You Bad,” NRBQ
Though it’s hard to pass up such power-pop classics as Big Star’s “Kanga Roo” and the Flamin’ Groovies’ “Slow Death,” I’m going to choose a song by a band even less appropriately pigeonholed.

TOMMY KEENE
“Play On,” Raspberries
It’s the Raspberries’ “A Hard Day’s Night.” The lyrics are very rock cliché—“Play your hits and all the girls will come”—but the main riff is classic, and the too-high-for-my-high-school-band-to-cover harmonies are amazing. The record it’s on, Starting Over, is the quintessential power-pop album, a perfect blend of the Beatles, Beach Boys and Who. It was their attempt to shed their teenybopper image, and “Play On” sort of chronicles their frustration.

DAVID LOWERY, CAMPER VAN BEETHOVEN
“Shake Some Action,” Flamin’ Groovies
In the verses, the narrator is defensive yet somehow defiant. This complex narrative view contrasts nicely with the brash and simple pronouncements of the chorus. The chords are also fat, and that to me is the number-one defining element of power pop: a hooky chord progression. You may have guessed I would pick this song, as Cracker covered it for the movie Clueless.

JASON LYTLE, GRANDADDY
“Barracuda,” Heart
It just blew me out of my shoes. It sounded forbidden. I remember being disturbed by it as a little kid. It was almost like I was looking at a dirty magazine. It was the dance I never learned. The fact there were two women up front didn’t hurt matters, either.

MATT PRYOR, GET UP KIDS
“Surrender,” Cheap Trick
When we were on tour with Weezer last year, Robin Zander and Rick Nielsen asked if they could come out and play “Surrender” with us at a show in Milwaukee. It was one of the most exciting and surreal moments of my life. I’d give my left arm to be able to write a song half that good. It’s perfect pop—the chorus just repeats itself but never goes stale.

ROBERT SCHNEIDER, APPLES IN STEREO
“Rock ‘N’ Roll High School,” the Ramones
It rocks out with huge-sounding drums, attitude and it’s really catchy. In the equation, the power times the pop is about equal. Plus, it was produced by Phil Spector, and it has an explosion at the end, like Alice Cooper’s “School’s Out.” The Ramones were the new Beach Boys.

CHRIS STAMEY
“September Gurls,” Big Star
A wonderful moment for treble, melody and astrology. Although I think your question should be American power-pop “recording,” not “song”: The sound, arrangement, production and mix were often the thing.

CHRIS WALLA, DEATH CAB FOR CUTIE
“Solar Sister,” the Posies
It’s their finest moment, the perfect balance of bombastic, tricky cheapness and vocal creme fraische. I can’t understand half the words, but it doesn’t seem to matter that much. I learned more about singing harmonies with this record in my car than I did in three years of choir.

JANET WEISS, SLEATER-KINNEY
“September Gurls,” Big Star
One, because I am indeed a September gurl, and two, because it’s the catchiest, most melodic sing-along since the Beatles’ “Eight Days A Week.” It makes you wish for one of those “December boys”!

6 replies on “Power Pop: What I Like About You: Artists Surrender Their Favorite American Power-Pop Songs”

How do the Shoes or Twilley instill profound hatred in anyone? That man has a (big) black heart.

Albini is a pretentious twat. He is the very epitome of everything he rails against.

That said, he has a point about labels such as “power pop.” But he’s still an ass.

Love Power Pop. ‘Couldn’t I Just Tell You’ by Todd Rundgren is an Essential Power Pop listen in my book. Cheap Trick has some great Power Pop songs as well, and Badfinger just to name a few, if they haven’t already been mentioned. Love this post, Steve.

Oh of course, The Nazz song ‘Open My Eyes’ could also be the Best Ever Power Pop song as well, in my opinion.

First off, Albini is entitled to his opinion, I like his producing, just don’t always agree w/ his opinions. What’s great about power pop is that the torch is still being carried by many who were approached for the article, check out:

Yo La Tengo- Drug Test
Spoon- Beast & Dragon Adored or Anything You Want
Art Brut- Emily Kane
I think are the current reigning power pop group-
New Pornographers- Twin Cinema or Broken Beads or my favorite song of the year so far, A.C. Newman’s There Are Maybe 10 or 12….