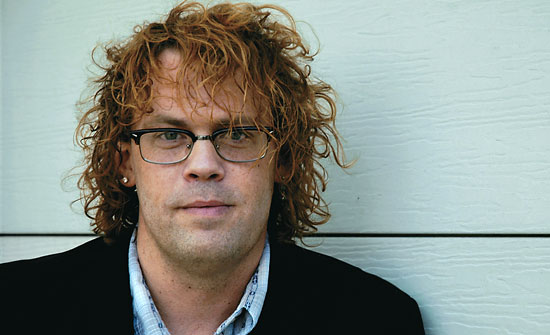 2002’s front-line misadventures of MAGNET reporter-at-large Jonathan Valania, who mailed us this letter from his foxhole just outside Elliott Smith’s house.

Well, it’s been quite a year. Beck. Paul Westerberg. Wilco. Which reminds me, a funny thing happened to me after the Wilco cover story was published in May. Actually, a bunch of funny things. First, Jeff Tweedy stopped talking to me. No big change there: He barely talked to me while I was trying to write the damn thing. And it’s not like I’ll shed a tear when I’m not invited to the next Wilco slumber party. I love Wilco’s music, but I’ve had more laughs hanging out with cancer patients. I think you get a sense of this when you watch I Am Trying To Break Your Heart, Sam Jones’ Wilco rockumentary. Yeah, that’s me in the movie wearing a hat I’ve been told more than once is “dumb”—but hey, I’m stickin’ by it. (And how about the choppers on Rolling Stone’s David Fricke? Hands down, the best teeth in rock criticism.) I must say, though, I was a little disappointed after I saw the film. I really thought it would be more about me and my life and my troubles with record companies and Jay Bennett (pictured).

But seriously, one of the hard lessons learned from all of this: Never write an unflinching, dirty-laundry-and-all, behind-the-scenes cover story about Bennett getting kicked out of Wilco when the guy sleeps on your girlfriend’s floor every time he and his new sidekick, Edward Burch, play in Philadelphia—which was, like, five times since that story was published. Trust me, it can make for some uncomfortable moments around the breakfast table.

I guess I first got the sense Bennett was less than happy with the article when he told a mutual friend he was going to break my fingers. After watching him get kicked to the curb in the Wilco film, I went back and re-read my story. Although I stand by every word, there are a few things about Bennett that got lost in the he-said/he-said bullshit. While he may be a handful to play in a band with, Bennett is an exceptionally talented musician, and a large part of the credit for the huge artistic leaps Wilco has made with every album since 1995’s A.M. should be laid at his feet. And that Ed Burch might be the nicest guy in rock—and he can really sing, too. The Palace At 4am (Part 1), the album they made together, is one of 2002’s sleeper gems. An acoustic version of it, Palace 1919, should be available on the duo’s website by the time you read this. Or just ask them for it the next time they show up in your town with their Skipper-and-Lil’-Buddy act, which they’ve performed live something like 150 times since April.

Vowing to let the fingers break where they may, I ventured backstage before a recent Bennett & Burch show with my tape recorder to clarify Bennett’s role in the making of Yankee Hotel Foxtrot and get his reaction to I Am Trying To Break Your Heart.

On the question of how much he actually played on Yankee Hotel Foxtrot: “I am 100-percent involved in that record—songwriting, playing, arranging, and I recorded the whole thing—as much as any other Wilco record. Somebody said, ‘You don’t play as many instruments on it as you did on Summerteeth.’ Well, that would be impossible. I would have to be the lead singer as well. John (Stirratt) only plays bass on eight of the songs, Leroy (Bach) isn’t on it very much. Most of the record is me, Jeff and Glenn (Kotche). Bottom line, it’s safe to say I am playing at least four or five primary instruments on each track.”

On I Am Trying To Break Your Heart: “I have not seen the movie, but I lived the uncut version. I will say frankly that the movie, in some very specific ways, is very deceptive. It takes scenes and uses them extremely out of context and uses them to tell a story. Sam happened to not be there for some of the real conflict. He had about three scenes he could make look like conflict, and so he used what he had. I don’t know if that’s right as a moviemaker. I’ll admit that there was controversy, but it’s not the stuff that Sam has on film. I’ve been told of three or four scenes that have been used in the movie, and they are honestly far less extreme than an argument that [Burch] and I had four days ago onstage, and we are sitting here right now in the same room. There’s a scene in Broadcast News where William Hurt fakes the reaction-shot tear. There is a lot of faking the reaction-shot tear. The Jeff puking (scene) is bullshit, cut out of sequence. He puked before the argument. But I’m not upset with Sam; he didn’t get the controversy on film, so he had to construct it. I always tell people, ‘If somebody films you for 80 hours, they could make you look however they want.’”

Two other things that got lost in my Wilco story: First, Ken Coomer is a great rock drummer. Got that? Great. Second, the new album by Stirratt’s side band, Autumn Defense, may well overshadow whatever comes after Yankee Hotel Foxtrot in terms of pure pop beatitude.

One last thing: Bennett assures me he would never break my fingers.

One reply on “Being There Now”

[…] RELATED: But seriously, one of the hard lessons learned from all of this: Never write an unflinching, dirty-laundry-and-all, behind-the-scenes cover story about Bennett getting kicked out of Wilco when the guy sleeps on your girlfriend’s floor every time he and his new sidekick, Edward Burch, play in Philadelphia—which was, like, five times since that story was published. Trust me, it can make for some uncomfortable moments around the breakfast table. MORE […]