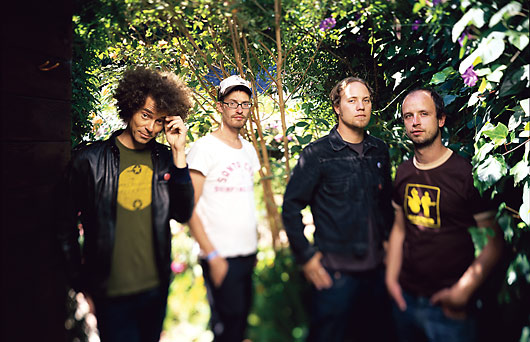 Bad luck seems to follow Zach Schwartz. “At the club last night, I stepped on a rusty nail,” he says. “It went right through my shoe, right through my foot. I was in the hospital until 6:30 this morning watching head-trauma and stab victims being wheeled in.” Last November, Schwartz had to cancel a Rogue Wave tour to have back surgery because of recurring problems with a slipped disc.

Still, the 31-year-old Schwartz (who goes by the name Zach Rogue for stage purposes) relays all this information with a chuckle and a grin. Slouching on a sofa at a Philadelphia bar, he props his shoes up on a coffee table covered in band stickers. A tan, billed beanie rests snugly on his head. Paired with his small hoop earrings and goatee, Schwartz slightly resembles Jackass parent-terrorizer Bam Margera. He has a curious and warm look on his face, as if nothing bad has ever happened to him. Maybe last night’s medication hasn’t worn off. Or maybe there’s just too much for the guy to be happy about.

Last year, Rogue Wave’s debut album, Out Of The Shadow (recorded mostly by Schwartz and released on Bay Area label Responsive Recordings in 2003), found its way to Sub Pop, which remastered and re-released the record. It also caught the attention of numerous critics with its witty, sarcastic lyrics (“In this postage-stamp world/You can all get in line/And lick my behind”) and quirky Kinks-like melodies. Even so, Schwartz is modest about his success so far.

“I think the condition of any musician is to always be looking,” he says, referring to his desire to touch a larger audience. “That’s just the nature of things as human beings. We always want what’s just within our reach or pretty far out of our reach.”

Schwartz began reaching in an Oakland household filled with music. “My stepdad would have friends over and they’d sit around playing an acoustic guitar, singing songs,” he says. “To me, that was about the coolest thing you could do.” When Schwartz was in fourth grade, his mother bought him a Casio keyboard, one he still plays today. She constantly encouraged his practicing and listening habits. “If I was playing Cypress Hill or something,” he laughs, “there’d be no judging.”

Schwartz’s interest in the guitar picked up during his time at the University of California at Davis, where he studied political science and literature. “I’d be playing a couple songs,” he says. “Friends would be sitting there and say, ‘Play that song again.’ I was like, ‘You wanna hear that?’ A lot of times, the songs were really obnoxious, like making fun of rednecks.”

After college, Schwartz spent time in Washington, D.C., working for a foreign-policy research group. “I loved the work,” he says. “The people were so brilliant. But I hated Washington. I couldn’t stand the culture there, so I moved to San Diego and lived on the beach for a while.”

Back West, he played in several bands, including the Desoto Reds, before leaving for New York, where he worked on Out Of The Shadow with producer Bill Racine (Hopewell, Odiorne). Schwartz returned to Oakland and found his bandmates—drummer Pat Spurgeon and bassist Sonya Westcott (who’s since been replaced by Evan Farrell)—via an online posting at Craig’s List. Gram Lebron, a friend of Spurgeon’s, eventually joined on guitar. Despite the changes in scenery, Schwartz’s interest in politics never waned, leading to the title of Rogue Wave’s sophomore release, Descended Like Vultures (Sub Pop).

“The vulture is the person who judges,” he explains. “My feeling is that if we did go in a different direction, there’d be criticism. But the vulture is larger than that. What do we see going on in the world? These are very caustic times where people take advantage of each other, whether it be business or politics.”

Descended Like Vultures is a welcome progression, a fuller, more tied-together record that retains the Shins-like charm of Out Of The Shadow. “The first album was an extension of me sitting there with my acoustic guitar and building some stuff on top of that,” says Schwartz. “This time, I didn’t want to start with one instrument. I wanted to start with a song. Everyone would throw their parts in there and we’d figure it out.”

Now that Schwartz is sharing song-arrangement duties with his bandmates, he’s opening up a lot more. He climbs the stage tonight in Philadelphia and addresses the audience: “Got a tetanus shot in the ass. If you’d like to see the bandage later … ”