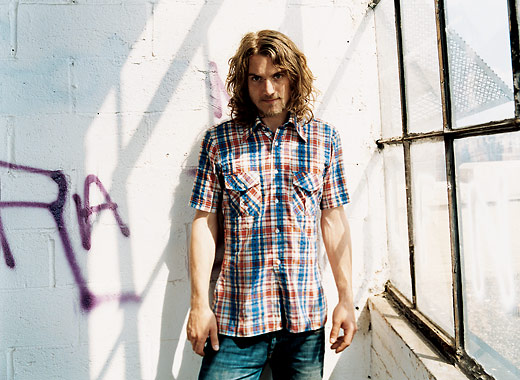 Embraced in England and slammed in Sweden: not exactly a crummy lot for most bands. That is, unless you’re from Sweden. Dungen’s Gustav Ejstes is as Swedish as they come, singing everything in his native tongue. Initially, the only critics who could decipher Dungen’s lyrics without a translator dismissed the group as proggy and outdated. Meanwhile, outside of Sweden, the NME (sans translator, presumably) was hailing the band as the Nordic Oasis.

“Our music has many references to the music of the ’60s and ’70s, and all the punk rockers who now write for the Swedish magazines hate that stuff,” says Ejstes from his new home in Stockholm. “But they’ve reacted to our global success, and it’s funny. Now they like it even though they said it was crap before.”

Finally available in the U.S. via Kemado Records after months of Web-generated buzz, Dungen’s latest, Ta Det Lugnt (“grab the calm”), funnels its shape-shifted convergence of psychedelic rock and Swedish folk through the sort of elongated stylistic and perceptual prism that can only come from nurturing your craft—while altering your brain chemistry—in a vacuum. A student of Swedish folk violin with a soft spot for hip hop, Ejstes went off the deep end for a spell after Dungen’s aborted tryst with Virgin Records in 2002.

“It was hard for them to manufacture and promote our music because they didn’t really understand what we were doing,” he says.

Drained and pissed off, Ejstes disbanded Dungen and retreated to his mother’s farm in southern Sweden. There, he vented his frustrations in his portable studio, recording Ta Det Lugnt under the influence of prodigious amounts of drugs and alcohol. Self-taught on an assortment of instruments, including guitar, flute, keyboards and drums, he handled most of the playing himself, with occasional help from the current Dungen lineup, most notably Reine Fiske, whom Ejstes proclaims “the best guitar player in Sweden.”

Chances are, nothing Ejstes does will ever sound so willfully expansive and violently beautiful again. And chances are, he’ll never feel so out of sorts again. “I had a borderline life crisis,” says Ejstes. “I was frustrated with a lot of things in my life and the world.”

While much has been said about Ta Det Lugnt’s sweeping experimental strokes, less has been said about the clever framework that so effortlessly holds together what could’ve been a real mess. Ejstes has a way with a psych/pop hook that recalls the work of the Zombies and Love as often as it does the Apples In Stereo. Yet the album’s compressed, chaotic production and Ejstes’ musical versatility means it never sounds anything less than exotic. Or perhaps Ta Det Lugnt only sounds exotic to linguistically challenged non-Swedes.

So just what is Ejstes singing about?

“Personal stuff, really,” he says. “I don’t want to go any further than that. I’ve never wanted to be Bob Dylan.”