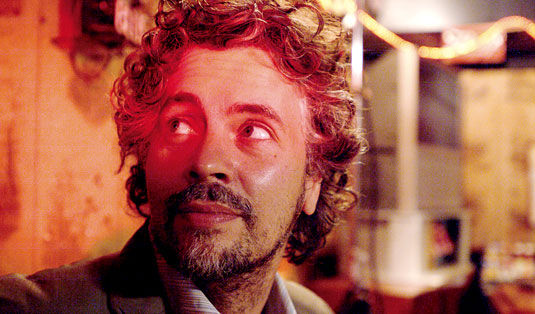 How does Flaming Lips singer Wayne Coyne spend his 45th birthday? By driving with his wife from Dallas to Oklahoma City, where he’ll meet up with his bandmates for dinner and drinks. And by talking to MAGNET. The Lips’ 12th and latest album is At War With The Mystics (Warner Bros.).

In the face of a music industry that’s growing more serious by the day, how important is it to stay absurd?
Maybe in comparison, it seems like other people are playing it safe. Then again, they probably really like what they’re doing. I don’t want to defend the Celine Dions or the Axl Roses of the world, but I bet they’re in the same boat: that what they do is cool and important.

At War With The Mystics is a loaded title.
The weight of that title just happened by accident. Naming records is just the worst hell in the world. You don’t know what to call these damn things. So when a theme just happens to come out from under it, it’s pretty amazing. But it is weird that Mystics is abstractly appropriate for our time. You really can read all sorts of different dilemmas going on right now into it. But we’re getting too much credit for knowing what we’re talking about.

What got you writing about magic realism, doomed lovers and rampant self-possessed optimism?
There’s something cinematic about what we call psychedelic rock. So to tell a story is just a more compelling narrative. Besides, we’re always just singing about ourselves. That’s so much better than the junk you’d make up or imagine. There’s a level of psychological weirdness that makes me feel like we’re communicating with people. Even Syd Barrett; people didn’t fucking know what he was talking about, but it seemed to make sense.

You’ve been stuck in plastic bubbles floating above stage and blown smoke bombs through megaphones. What’s left to scare you?
Nothing, artistically. Not at this age, not turning 45 today. If I was 25, I’d be a lot more insecure. So many things have happened along the way. [Lips multi-instrumentalist Steven Drozd] has been a heroin addict. My parents died. You don’t really worry about the pettiness of art and ideas. It’s what my life is. But it’s not all it’s about. Our art is our joy, and if we fuck up, I think our audience loves us still.

Are you comfortable with your role as a well-dressed, erudite, spacey and damaged preacher?
Heck. The way you say that out loud, I’ll buy it. If I went to see a band with a guy like that, I’d think it was pretty cool.