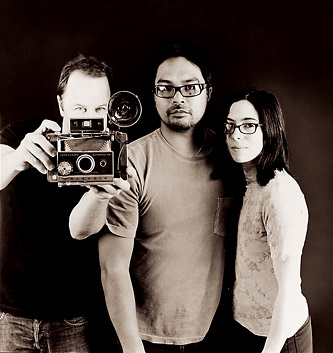 Though Baluyut had used the Whysall Lane name for solo acoustic performances in New York, the band began in earnest in 2001, when the Versus ringleader followed his girlfriend to the Bay Area. Baluyut hooked up with Pfahler and bassist/vocalist Mikel Delgado (an SPCA cat behaviorist by day), and Whysall Lane began practicing in the basement of Lost Weekend on the pretext of entertaining video browsers. But Baluyut and Pfahler couldn’t keep their new band under wraps for long. Friends in Mission Of Burma, Sleater-Kinney, Imperial Teen and the Ataris asked the group to open for them at shows.

“We got lucky,” says Baluyut. “But then we got sick of playing without a record out. You gotta come up with the goods or else you’re a hobby band.”

Whysall Lane’s self-titled debut (released on Pfahler’s Blackball label) will come as a satisfying rejoinder to the naysayers who think they’ve heard it all from Baluyut, Pfahler and their old bands. From the atmospheric, bitter trudge of “Half Life” to typewriter-punctuated murder mystery “High Heels,” the album unfolds like an origami artifact into the stately “Pillows” and “Wither Without You,” which swing with the soulful depth of Beatles opuses. Ghosts of friends and lovers in Baluyut’s past drift through Whysall Lane. It’s a mature work by a band with two guys who are pushing 40, have two daughters apiece and have slept on their share of floors during six-week tours.

“Our older bands had ‘careers in rock,’” says Baluyut. “But I don’t think from day one we assumed that we would be like that again. Everything in Whysall Lane is kind of backwards.”

Whysall Lane should send the message that the guys from Versus and Jawbreaker are still making music and cracking wise, even if it’s in the basement of a video store.

“I think a characteristic of both of our old bands is that it takes a little longer to get into it,” says Baluyut. “But when you’re into it, it’s really good. No one is gonna pick up Whysall Lane and say, ‘Sign ‘em up. The next Killers.’ But if they listen to whole thing, they might say, ‘Wow, these guys could be … the next J. Geils Band.”