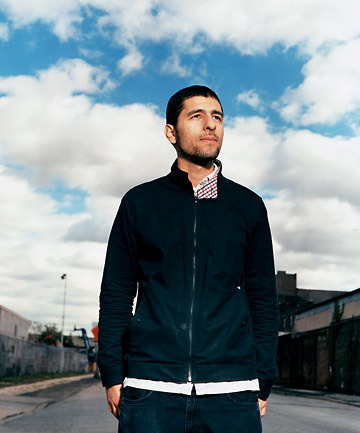 A superstar at home in Sweden but still largely unknown outside of Europe, Argentine-born folk singer José González—like his Norwegian counterparts Kings Of Convenience—has ushered in another banner season for the quiet-is-the-new-loud crowd. He’s landed a song in an OC episode, provided the soundtrack to a Sony commercial and signed to Mute Records.

The first few years of González’s life were spent in a town called Mendoza, located in the foothills of the Andes mountains near the Chilean border. His father, a singer, filled their home with all kinds of music, but he was eventually forced into exile when a military junta seized power in 1976.

“He was politically involved and had to flee the country,” remembers the 27-year-old González. “A lot of his friends scattered all over the States and Europe; we eventually ended up in Gothenburg, in Sweden.”

After settling into this strange new life, González began experimenting with various musical guises (ranging from hardcore band Back Against A Wall to indie-rock combo Only If You Call Me Jonathon…) before settling on a more intimate brand of expression. González picked up the classical guitar with which he had experimented as a youth, signed up for some flamenco lessons and released his 2003 debut single, the quasi-spiritual “Crosses.” Inspired by basement recording savants Elliott Smith and Songs: Ohia’s Jason Molina, as well as Nick Drake, Jeremy Enigk and ’60s Cuban protest artist Silvio Rodriguez, González released the full-length Veneer (Hidden Agenda) at the end of 2005.

Like Drake’s finest moments, Veneer is a work of quiet intensity, hiding its heart with understated, almost conversational vocals and a delicate, spiderwebbed fingerpicking style. González’s songwriting ranges from the lovely circular melody of “Stay In The Shade” to the Jimmy Page-leaning, nearly Moroccan alternative tunings and José Feliciano-like vocal timbre of “Hints” to the flamenco rhythms that anchor “Remain.” His lyrics never completely spell out his state of mind, but they hint at the emotions boiling just beneath the surface.

“Not many of the songs are about love,” says González. “Most are about searching. I suppose the first impression people get is that it sounds sad, so maybe I’m sad about love.”

While his Mute debut is due this summer, a recent visit to the U.K. prompted a partnership with downbeat group Zero 7, resulting in a remix of “Crosses” and a collaboration on two new songs for the group’s forthcoming album. While Zero 7’s synthesized sounds may seem odd for González, he gained some insight from the sessions.

“I started to record my new songs on a computer but realized it’s best if I just use my Dictaphone,” he laughs sheepishly. “That way, I can keep it simple: concentrate on guitar and vocals and not clutter them up with other instruments. I noticed that this is the way I work best.”