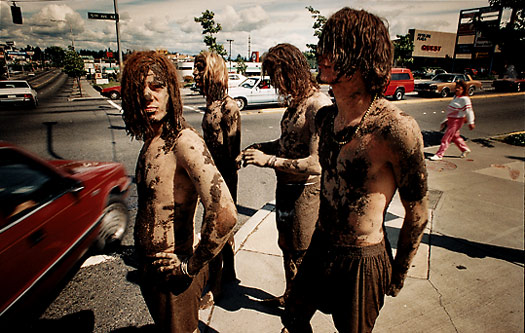 In 1981, McLaughlin wrote a letter to a Seattle fanzine excoriating local high-school band Mr. Epp And The Calculations as “pure grunge … pure shit.” Mr. Epp was a band named after McLaughlin’s math teacher and, not coincidentally, featured McLaughlin on guitar. Nonetheless, there it is: After all the rock genealogy, after the explosion, after all the post-mortem inquisitions as to why it all went so horribly wrong, “grunge” as we all know it started with a Bellevue, Wash., teenage punk.

Interestingly enough, grunge may very well end with Mark Arm (neé McLaughlin). A quarter-century after that letter, Arm and Mr. Epp bandmate Steve Turner are still playing music together, having watched the scene they kickstarted go from nothing to supernova and back again. Mr. Epp begat Green River, which begat Mudhoney. Mudhoney would take the garage/ punk of Seattle and—through a convergence of hype and a flurry of landmark recordings—transform a local sound into a national phenomenon.

Of all the bands that were part of this phenomenon, Mudhoney is the only one left. Back on Sub Pop after a major-label stint, the quartet is still rocking in a vaguely grunge-like manner on its eighth album, Under A Billion Suns. Either the early projections were cruelly prescient or nobody has bothered to tell Arm to stop making music.

“I still love it all,” he says. “I’m not doing it because it’s making me a ton of money. Some people might feel trapped by music being the only thing they know and the only way to make a living. For me, it’s just gravy on the mashed potatoes or ice cream on the cake.”

1988-1991
After Green River breaks up, Arm and Turner plot a musical course for a new band. While Green River’s Stone Gossard and Jeff Ament take the band’s pop-metal elements to create Mother Love Bone and, eventually, Pearl Jam, Arm and Turner use their punk and garage-rock influences as a basis for Mudhoney, which signs to the fledgling Sub Pop label even before Green River disbands.

“We had agreed to put out the last Green River record (1988’s Rehab Doll) with the hope that we would be following up with music by Mudhoney, who we basically agreed to put out without hearing a note,” says Sub Pop co-founder Jonathan Poneman. “Mudhoney became our flagship band.”

Yet the genesis of Mudhoney didn’t feel like any sort of seismic event to its members: singer/guitarist Arm, guitarist Turner, bassist Matt Lukin (Melvins) and drummer Dan Peters (Bundle Of Hiss).

“It was a little more real than the Thrown-Ups,” laughs Arm, referring to the shambling, offensive side project he and Turner dabbled with. “It felt really good, but I don’t think some big light bulb flashed over our heads. We were all good friends. At first, Dan didn’t know Matt, but the rest of us all knew each other. Once the band formed, it was pretty easy for it to gel. Our sound was simpler and also more fucked-up than Green River. The guitars were much noisier and fuzzier.”

Fuzz: That quintessential element of the Seattle sound equally evokes the grimy forcefulness of Northwest Nuggets inclusions the Sonics and the death-ray guitars of Black Flag’s Greg Ginn. Aided by vintage guitar pedals (namely the Univox Super-Fuzz and the Electro-Harmonix Big Muff), Mudhoney puts out two records on Sub Pop that define grunge: the “Touch Me I’m Sick” 45 and the aptly titled Superfuzz Bigmuff EP.

Coinciding with a wave of cunning self-promotion on the part of Sub Pop (which ignites the hype machine by paying for a Melody Maker journalist and photographer to fly to Seattle to cover “the scene”), Mudhoney becomes the preeminent purveyor of the now-codified style of grunge. Championed by Sonic Youth (which brings the band along on a European tour), Mudhoney unwittingly goes from “influenced” to “influential.”

“I think I might have reacted, for a while in the early and mid-’90s, against ‘Touch Me I’m Sick,’ because that was the song that everyone referred to,” says Arm. “But I got over it. For a band that’s been around as long as us, that’s part of what makes the history of the band. It’s important.”

After Superfuzz, the group continues touring and releases its self-titled full-length. As the Seattle wave begins to crest in 1990, many Sub Pop bands find new homes at major labels. Mudhoney, however, decides to stay with Sub Pop, releasing the less-grunge/more-garage Every Good Boy Deserves Fudge.

1992-1998
Despite Mudhoney’s disdain for the hype cesspool its scene is drowning in (witness 1992’s “Overblown,” the band’s sneering contribution to the Cameron Crowe film Singles), Arm and Co. can’t ignore the major-label knocks at their door: Mudhoney signs with Reprise and releases Piece Of Cake, an album that progresses beyond grunge stereotypes but sacrifices none of the band’s intensity. Needless to say, Piece Of Cake tanks. Despite Mudhoney’s undisputed position as the most important band in Seattle, the rising tide of grunge doesn’t lift all the boats in the Emerald City.

“There were some great people that worked (at Reprise) in the early ’90s,” says Arm, referring to A&R man David Katznelson and the other supporters who miraculously kept Mudhoney on the label’s roster for two more albums and an EP. Even more impressive is the financial arrangement the group had with Reprise.

“It did allow us to buy houses, but that was all on advance money, not on record sales,” laughs Arm. “We had a deal with them where we got the back end of our recording budget, so whatever we didn’t spend recording the album, we got to keep. So we would record for $20,000 or $30,000 and keep the remaining $110,000 for ourselves.”

During this period of big-money machinations, Sub Pop releases a 1992 single and full-length by the Monkeywrench (Arm and Turner’s garage/blues side project) and a 1994 collaboration between Mudhoney and Jimmie Dale Gilmore.

Good thing the band didn’t lose Sub Pop’s phone number. Despite his reservations about hooking up with a major label, Arm feels the experience was a positive one. At least at the beginning.

“It was great, up until the last year or so,” he says. “You could tell, around ’95, that things were shifting and weren’t so good. We went to meet with (label president) Danny Goldberg and—this was after ‘Into Yer Shtik’ was on My Brother The Cow—he refused to meet with us because he, rightly so, thought the song (sample lyric: “Why don’t you blow your brains out, too?”) was a personal attack on Courtney Love and Kurt Cobain and all the suck-ass people that were surrounding them—including him. We got kept on for one more record, but just by the skin of our teeth. They decided that whatever we didn’t spend would revert back to the company. So we figured that would be the last time we’d be able to spend major-label money and that since we couldn’t keep it, we may as well just spend it.”

And Mudhoney does, hiring the legendary Jim Dickinson to produce Tomorrow Hit Today. Despite spending more than $150,000 making the album, it ends up sounding like neither a great Mudhoney record nor a radio-friendly unit-shifter. Reprise doesn’t bother renewing the band’s contract.

1999-2006
In late 1998, Lukin quits Mudhoney. The bassist has been a massive part of Mudhoney’s sound, the thundering rhythm section being just as essential as Arm’s trademark voice and Turner’s ferociously smart guitar style.

“His interest in music had severely waned by around 1995,” says Arm. “I think he would have quit three years before he did if it weren’t for the fact that in the early days, we decided that if anyone disappears then we have to change the name. I think he felt obligated to the rest of the band. So when he did quit, he was very clear in letting us know that if we decided to continue and get somebody else that we could still call the band Mudhoney.”

This should be the end of the story. Essential member quits, major-label contract is over, dead-trend-albatross is hanging around your neck. Yep, that’s about all it takes for most bands to hang it up. And that’s just about what Mudhoney does. March To Fuzz (a three-CD collection of “hits” and rarities) is released and looks to a lot of people like an obituary.

“We took a year off after Matt quit,” says Arm. “Dan’s first reaction was that he couldn’t even think about playing and looking up and not seeing Matt onstage with him. So, Steve and I worked on Monkeywrench stuff for about a year and a half. Along the way, some weird things happened. Mudhoney got an offer to play Brazil; that was too good of a thing to refuse, so we asked Guy (Maddison) to do it. He was still in nursing school, so we got Steve Dukich to fill in. Doing that tour, everyone realized that we missed what we had.”

After Maddison finishes up nursing school (he’s since returned to get a master’s degree), he becomes a full-time member of Mudhoney. Soon after, Sub Pop releases the somewhat tentative Since We’ve Become Translucent. Mudhoney’s return to Sub Pop (Arm works at the label as a warehouse manager) is the sort of circular, out-to-pasture honorarium that should point to a band whiling away its last few years of creativity. This isn’t the case, however.

“This is the label that Mudhoney built,” says Poneman. “From an artistic perspective, they’re at a very important part of their career and they’re making amazing music. There’s a sophistication and an ambience that I think is really intriguing and very listenable and incredibly compelling.”

Indeed, the new Under A Billion Suns shows a band that’s comfortable with its reputation, history and future.

One reply on “Mudhoney: Fuzz Lightyears”