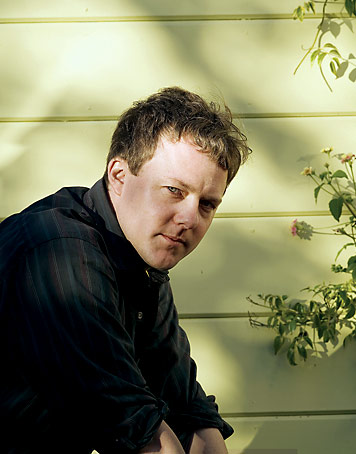 If you ask Hudson Bell where he’s lived, he’ll reel off a list of Southern cities: Oxford, Baton Rouge, Lexington, Little Rock. If you ask him what he remembers, the answers may elude him. Just take note of how Bell recounts the grim tale of his guitar teacher’s suicide.

“My view of the story was that my sister took me to practice, I go downstairs, and all the lights were out,” he says in a thick drawl. “I was calling out his name, and he wasn’t there. What really happened was I never went anywhere. I was sitting there practicing in my room, and they called and told me what happened even before I went.”

It’s a crippling introduction to the music world at age 13, but it helps explain some of the elusive themes and searching song titles on When The Sun Is The Moon (Monitor), Bell’s third album. Now 31 and residing in San Francisco, Bell opens “The Midnight Year” by singing, “Welcome back to your hometown/We’re promising we won’t let you down anymore.” His highwire voice lilts at the end of each verse like Built To Spill’s Doug Martsch, but at nearly eight minutes long, the song garners other comparisons: Pavement’s slacker vibe and guitar-solo extravagance and Modest Mouse’s aimless, long-drive song structures. Before “The Midnight Year” ends, there are bird chirps, bells, ocean crashes, harmonica and plenty of fuzz pedal. The fuzz is laid on thick throughout When The Sun Is The Moon, mainly due to Bell’s nomadic nature; moving from place to place forced him to find temporary bandmates or fill out the sound of his early material without the aid of other musicians.

“When it came to playing by myself, it added a lot,” he explains. “A lot of times, I’d be playing and it doesn’t sound like there’s just one guitar up there. And once I started buying pedals, I kinda went nuts on eBay.”

The frequent lineup changes also account for why Bell’s band—John Slater (bass, piano, organ) and Brian Fraser (drums)—goes by his own name, a topic of endless, often humorous confusion.

“When I was younger, I didn’t want it to be my name,” he says. “I wanted it to be a band name. But it got to the point where moving to another town, it was the one constant thing, always me. I’d meet some people at a show, and if I was like, ‘Hi, I’m Hudson,’ they’d be like, ‘What? That’s your name?’”

Despite Bell’s well-traveled past, he has yet to visit Baltimore, home of the Monitor label. Still, he draws a connection. “I played baseball when I was younger, and my favorite team was the Baltimore Orioles,” he says. “My dream was to be a pitcher on the Orioles, so I was kinda like, ‘This is the closest thing I can get.’”