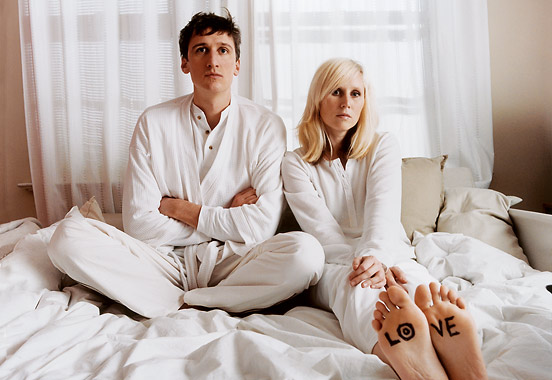 Some bands become unsteady when they put down roots, but husband-and-wife duo Mates Of State discovered better songwriting through parenthood. By Brian Howard

It’s a blisteringly cold winter afternoon in East Haven, Conn., and Jason Hammel and Kori Gardner are discussing what they did on New Year’s Eve.

“We went to a friend’s party and played this game called Mafia,” says Gardner. “Whenever I explain the game, people are like [sarcastically], ‘That sounds like a great time.’ But it’s really fun. You get cards, and you’re either designated as a mafia member or a citizen. Nobody knows what you are, and you basically argue your way out of being accused; you lie if you’re mafia. And then people are killed.”

“It’s basically about being able to lie to your friends,” explains Hammel, perhaps trying to dignify the parlor game as a hip, happening New Year’s Eve activity. “Kori got wasted, too.”

If this sounds like atypical rock ’n’ roll behavior, keep in mind that Mates Of State is an atypical rock ’n’ roll band. Hammel and Gardner are husband and wife, drummer and organ player. The duo doesn’t require guitars to conjure a world of racket, singing to, over and with each other in joyous, jubilant cacophony. Mates Of State have always been a family band. Over the course of four albums of frantic, hyper-kinetic songs in the key of love, Hammel and Gardner have established themselves as indie rock’s Ozzie and Harriet, the reluctantly wholesome counterpoint to the alt-nation’s reigning two-piece, the White Stripes.

While Jack and Meg get freakier, the Mates’ image gets squeakier. Their newest addition is Magnolia, the couple’s one-and-a-half-year-old daughter, and she’s the biggest change in a season of big changes for the Mates. The last two years have seen Hammel and Gardner quit their day jobs (the former as a cancer researcher, the latter as a teacher) to pursue music full-time. They’ve moved from San Francisco to East Haven and signed to a new label, Barsuk, which has just released Bring It Back, the Mates’ first full-length since 2003’s critically acclaimed Team Boo. But all of this pales in comparison to the adventures of parenthood.

“We made the decision that Magnolia is not going to be in a band,” jokes the 28-year-old Hammel. Magnolia does appear on Bring It Back, cooing and gurgling through the closing seconds of the somber “Nature And The Wreck.”

“We’re trying to treat her as a roadie,” says the 31-year-old Gardner, who’s twice taken her daughter on tour, with a nanny in tow. The first time, they traveled in an RV they’d park outside the club so as to never be more than a few feet from Magnolia. “I had her milk,” deadpans Gardner. “She won’t think what we do is cool. You never think what your parents do is cool until you’re too old.”

Living up to some preconceived notion of how an indie-rock band should conduct itself has always been a point of contention for the duo, which formed its drums-and-keys act after playing in Lawrence, Kan., guitar bands in the late-’90s. Hammel, a former skate-punk and metalhead from Stewartville, Minn., arrived at the University of Kansas and began pre-med studies. Gardner came from New Haven, Conn., to pursue a degree in elementary education. They played in separate bands before forming one of their own, Vosotros, in 1997. Six months later, they formed Mates Of State as something to do when Vosotros practice fell through. As mutually exclusive as rock and wedded bliss tend to be, they worry that people will dismiss them out of hand. (For a look at some other romantically involved musical duos, see page 62.)

“Marriage and family are sort of the antithesis of rock ’n’ roll,” says Hammel, who’s been with Gardner for nine years and married to her for almost five. “If people start thinking, ‘Oh, they’re a family and have kids,’ a lot of tough music listeners aren’t going to give the music a chance.”

Their worries seem unfounded, as Mates Of State are two of the cooler parents this side of Kim Gordon and Thurston Moore. But cool or not, Gardner and Hammel are making this new arrangement work. While writing an album around the schedule of a newborn might seem a like challenge (the couple did take a few months off from music entirely), the Magnolia factor has actually improved the way Hammel and Gardner work.

“I think it’s made us more efficient,” says Hammel as Gardner runs out of their kitchen to tend to their crying daughter. “As unorthodox as this line of work is, we would have a schedule where she’d leave the house to go to daycare and we’d work on music for five or six hours a day, three days a week. So we knew we had this amount of time to actually get stuff done. Surprisingly enough, it actually worked.”

“Because of that, this is the first time we’ve written a record and not had any fights,” says Gardner, returning to the room with Magnolia.

“Just sitting down and playing a part over and over again until we both agreed to like it would get frustrating,” says Hammel. “Because the other person would say, ‘I like what I’m playing. Why don’t you hurry up and get on board here?’ And the other person would be like, ‘I just don’t like that part. This part sucks. Whatever.’ But now we can just be like, ‘Well, I’ve got this part. If you don’t like it, I’ll put it on the computer and then you can play around with it on your own time.’”

“It needed a little more breathing time, we realized,” says Gardner. “We’d step away and actually be patient.”

If the ability to adapt to new challenges is the mark of a successful union, Gardner and Hammel seem bound for even greater heights. It was, after all, their leap from guitar-rock Lawrence to San Francisco (where they lived and recorded breakthrough second record, 2002’s Our Constant Concern) that ultimately made them comfortable with their unique musical arrangement.

“Lawrence was a lot smaller and not supportive,” says Hammel. “When we went to San Francisco, we were just blown away by all the different types of music, because Mates Of State didn’t really fit in Lawrence. All of a sudden, we were like, ‘We’re not gonna do rock anymore. We’re just gonna play this organ and be a pop band or something.’”

In California, Mates Of State found not only a new sound, but also a supportive scene that included bands such as Beulah and Stratford 4. “They’d come to your shows, say, ‘Hey, let’s party together. Let’s go to campfires on the beach,’” says Hammel. “That never happened in Lawrence. All of a sudden, people were just trying to inspire one another to do better. So that just changed our world to the point where people are always like, ‘You guys are such a happy band.’”

Where Our Constant Concern feels like the work of a band finding its stride, Bring It Back seems to be written by an outfit that’s a little bit more at peace, one that’s learning to soak up the scenery. Not that Mates Of State’s previous offerings could be described as discontented, but those albums’ multi-part songs, battling vocals and swing-on-a-dime tempo changes suggest a certain hyperactive mania. Hammel and Gardner often sing different lyrics at the same time, evoking an ongoing argument backed by an organ grinder. Bring It Back reveals a band that’s more contemplative, more introspective and even a little bit more placid.

Opener “Think Long” features the duo’s trademark vocal volleys. But as the song simmers to its conclusion, Hammel and Gardner hit the chorus (“Think long/Think think long/Think think”) as a company front. “Fraud In The ’80s” finds them trading lines back and forth before the two converge with a rallying cry of “You could surely try to be more alive!” And “Beautiful Dreamer,” with its simple refrain (“Do it all the time/Do it all the time”) is sung almost entirely in unison. Rather than trying to cram each track with seven or eight sections, the duo decided to rein in the complexity of its songs.

“The challenge is trying to cut out parts,” says Gardner. “It’s hard for us to write a basic structure. We get bored with it.”

Whether by design or not, the songs on Bring It Back do feel structurally more unified, and the voices singing them also seem more in tune with each other. There are passages where it’s difficult to tell if the harmonies are Hammel and Gardner or just multiple tracks of the same voice. But if there’s one striking difference this time out, it’s that Bring It Back has a decidedly subdued, even bleak, thread running through it. If the previous albums are one big honeymoon (the gyrations of a duo in a fairytale romance), Bring It Back is the reality check (the work of a band whose world has been turned upside down).

“We’ve always been pro-change, in every aspect of our life,” says Gardner. “Any time we’ve made a change, something positive has happened. Every time we’ve wanted to be more positive people, we’ve just made a big change. And that’s sort of what happened.”