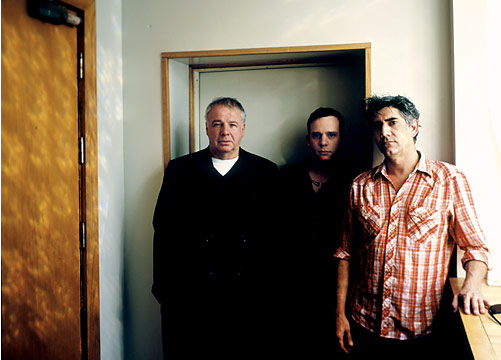 At a Houston shopping mall in 1966, a seemingly standard guitar/bass/drums trio appeared to be consciously using its lack of musicianship to traverse unknown boundaries of what might be termed psychedelia. Lelan Rogers, older brother of Kenny and owner of Texas record label International Artists, happened to hear the group that day. Rogers was later quoted as saying he signed the trio because he thought it was having a joke at the audience’s expense.

Looking down the business end of guitarist/vocalist Mayo Thompson’s 40-year career as the center of the Red Krayola—whose music has ventured into extreme psych, political operettas, Americana and outright noise—it’s clear the mall gig was no put-on. From Texas to New York to Europe and back again, the Krayola has spent its time on the margins of the margins. Perhaps the group’s refusal to repeat itself has guaranteed its obscurity.

“Repetition has never really even been possible,” says Thompson with more than a hint of a Texas drawl that’s stayed with him no matter how many years he’s spent living in Europe.

There’s little doubt about whom the Red Krayola has inspired. The band’s debut, The Parable Of Arable Land, served as a beacon for Rocket From The Tombs and, later, Pere Ubu. Galaxie 500, Spacemen 3 and the Cramps have covered the group. A mid-’70s incarnation of the Krayola plugged into jittery, danceable grooves smeared with Thompson’s lanky guitar and abstract lyrics before post-punk was conceived.

By the ’90s, Thompson found himself playing with Chicago’s indie-rock cognoscenti, including John McEntire (Tortoise), David Grubbs and Jim O’Rourke (both of Gastr Del Sol). Along with those Windy City post-rockers came guitarist Tom Watson (Slovenly) and multi-instrumentalist Stephen Prina (a visual artist), who are current Krayola members. A healthy relationship with the Drag City label has allowed the last decade to be the band’s most prolific and unpredictable period.

1966-1970
With core members Thompson, bassist Steve Cunningham and drummer Frederick “Rick” Barthelme (an artist/author who’d later pen such novels as Natural Selection and Painted Desert), the Red Crayola—as the name is originally spelled—records Parable with a hippie collective known as the Familiar Ugly. This loose cluster of musicians helps the trio crank out the noise and chaos that act as links between Parable’s songs. Although the debut certainly has more than a hint of the period’s psychedelic qualities (brash, Byrds-esque guitar crank and anti-war lyrics), each song is engulfed in noise and less concerned with structure than sound itself. Roky Erickson, whose 13th Floor Elevators are also signed to International Artists, drops by to play keyboard and harmonica on Parable.

“You could say our early records are a document of our inability to play,” says Thompson.

The Red Crayola is set apart by its lack of desire to cover ground already covered. This becomes obvious when the band hands International Artists sophomore album Coconut Hotel, a collection of song-free drones and blips that’s much closer to John Cage than anything happening in Houston or San Francisco. Horrified, the label refuses to release it, though tapes of the sessions make their way into the hands of UCLA art-history professor Kurt Von Meier, who invites the Red Crayola to play the Angry Arts Folk Festival in Berkeley and a July 4 gig at the Greek Theater in Los Angeles. The band’s performances, a series of 20-minute, feedback-laden, free-form excursions, are dedicated to the troops in Vietnam. (Drag City released the recordings of these shows as Live 1967 in 1998, three years after the label issued Coconut Hotel for the first time.)

“I recall a Rolling Stone critic who claimed about that performance that we were either avatars or atavisms,” says Thompson. “We weren’t avatars in the sense that we were nobody’s agent and nobody was controlling us … But people tried to get with the program, even though we weren’t ‘groovy’ in the usual sense. But I think people appreciated the implications.”

Oddly enough, International Artists still wants a second album from the band, so the Krayola—now spelled with a K in the U.S., thanks to an angry letter from lawyers representing a certain crayon manufacturer—records God Bless The Red Krayola And All Who Sail With It. Tommy Smith fills the departed Barthelme’s drum chair on the intriguingly sparse, 20-song effort. Its abstract themes, pointed guitar playing and edgy rhythmic shifts prefigure early-period Fall and the no-wave movement by a decade. But the album goes nowhere and the Krayola disbands.

For his 1970 solo effort, Corky’s Debt To His Father, Thompson surrounds himself with studio players, adding lap steel, horns and backing vocals to an album of fractured rock and highly personal lyrics that sits easily alongside Skip Spence’s Oar.

1973-1989
Thompson travels to New York, where he connects with performance-art collective Art & Language, with whom he’ll collaborate throughout the ’70s and early ’80s. Their first work, 1976’s Corrected Slogans, is a mostly acoustic album of strange, politically charged pieces that sometimes border on opera.

When Thompson moves to England in the late ’70s, former members of the Swell Maps and X-Ray Spex gravitate to the Red Krayola’s music, ultimately joining the duo of Thompson and drummer Jesse Chamberlain. Around this time, Thompson is employed by the Rough Trade label to do A&R and publicity; he also produces albums by the Fall, Cabaret Voltaire, Raincoats, Chills and Primal Scream, among others.

Thompson’s two-year stint as Pere Ubu’s guitarist brings him back to the U.S. for touring and recording. After Ubu temporarily splits in the early ’80s, Thompson continues playing with members of the band. 1983’s Black Snakes, which features further collaborations with Art & Language, is inspired by a strange analogy for good and evil.

“The title tells about a logical problem of being in a dark room full of snakes,” says Thompson. “The snakes have got numbers on ’em with fluorescent paint, and the job is to count the snakes. But there’s a slight hitch. Not every snake has got just one number on it. Some have got six or more. It gets to be impossible.”

By the end of the decade, the Red Krayola morphs yet again, as Thompson leaves England for Germany and connects with musician/painter Albert Oehlen, as well as a group of avant-jazz musicians. Out of this period comes Malefactor, Ade and instrumental track “Disco Death,” which is used for Derek Jarman’s award-winning 1988 film The Last Of England.

1994-2006
“I was living in Germany and got a phone call from David Grubbs,” recalls Thompson. “He was in Europe and asked if I was doing anything.”

The fateful phone call brings Thompson out of a relatively inactive period and sends another version of the Red Krayola sailing toward the end of the century. Also along for the ride are Tortoise’s McEntire and fIREHOSE/Minutemen drummer George Hurley. Surrounded by such players no doubt plays a huge part in the fact that Krayola albums of this period—Hazel, specifically—have more rational chops and a leaner, more subtle weirdness than previous records.

“It’s an amazingly kaleidoscopic record,” says Grubbs of Hazel. “It involved the most number of people and the most diverse group of musicians. Frequently, it was like an exquisite corpse game where somebody lays something down, then somebody else overdubs on that, one at a time. Each song grew into these absolutely strange, collage-like creations.”

“I’ve had this term ‘post-rock’ dished in my face and my implicit involvement in this,” says Thompson. “But as a genre, I thought, ‘Not me. How could I be post-rock?’ However, the term ‘free-pop’ makes sense.”

“Mayo’s working procedures tend to be admirably ad hoc,” says Grubbs. “One of the first times George Hurley and I played live with the Red Krayola, we were playing to a huge crowd in Boston. I don’t think George knew any of the songs. He would start drumming, and we would start playing a song. We would nudge him forward if it needed to go faster and pull him back if it needed to go slower. But if we pushed him too far forward, he would break into a thrash beat, and if we pulled him too far back, he’d break into a reggae beat. By the end of the set, I was wondering if Mayo was getting pissed off. But later, backstage, he broke into this wide grin and said, ‘We really had the snake on its tail tonight.’ He’s a big fan of unpredictability.”

In 1994, Thompson takes a position at Art Center College of Design in Pasadena, Calif., conducting seminars and teaching classes on the intersection of art and politics. Currently, he divides his time between Pasadena and Scotland.

The first half of the 21st century finds the Krayola releasing singles, touring and producing the soundtrack to Bruce and Norman Yonemoto’s experimental film Japan In Paris In L.A. Most recently, the band has released Introduction, its fourth proper album for Drag City. With Introduction, Thompson and Co. take on Americana 21st-century style, pushing the oddities of past albums to the background while emphasizing melody and giving free range to Thompson’s warm-yet-eerie comments on shark attacks and unbroken circles. Meanwhile, Chicago video artist Amy Cargill is working on a Krayola documentary that snags its title from God Bless The Red Krayola And All Who Sail With It.

“Everybody who makes music has to face up to the fact that once it’s out there, the whole world hears it,” concludes Thompson. “If I can make something out of that, then good for me, ’cause it’s an asymmetrical crap shoot and I get my shot.”