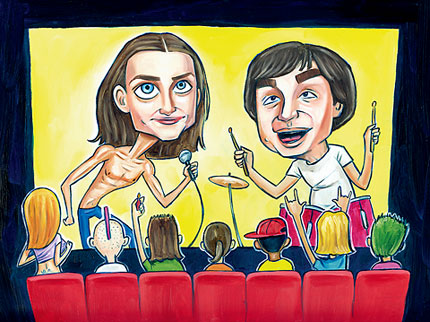 Get a good grip on your memory. If it doesn’t go back to the 1970s, you may want to read a book or two. See, Hollywood is coming for our icons next, and there isn’t a damn thing we can do about it.

The madness started a couple years ago, when Jamie Foxx won an Oscar for doing the same damn Ray Charles imitation—side-to-side with the head, face taking in the air—that everybody does. Ray set the template: early family traumas, love of music, a love story, some success, battles with drink and drugs, temptation that fucks up the earlier love story, pressure from The Man, redemption, decent soundtrack. Last year it was Johnny Cash and June Carter, essayed in Walk The Line by Joaquin Phoenix and Reese Witherspoon. She got the Oscar this time.

As usual, the first sign of trouble came from my daughters. They loved Walk The Line. They loved Johnny Cash. Trouble is, they loved Joaquin Phoenix as Johnny Cash. The real Johnny Cash was that old, gross guy who did the Nine Inch Nails cover, then died from being old and gross. Joaquin, on the other hand, is still young, handsomer than old John ever was and benefited from someone yelling “cut!” every time he was about to do the deed with a groupie.

And then there’s this other trend that’s starting to worry me. People are starting to get awards not for acting—for creating a character from the printed word of a script and making that character seem more real than people you actually know—but for doing really good imitations. Three of the five nominees for Best Actor this past year: David Strathairn for imitating Edward R. Murrow, Philip Seymour Hoffman for his Truman Capote impersonation and good old Joaquin, who didn’t really sound like Johnny Cash but sang the songs pretty well in his own way.

Why am I on about this, you’re asking yourself. Two reasons: Mike Myers as Keith Moon. Elijah Wood as Iggy Pop. These are actual green-lighted movie projects, and they’re only the beginning. Believe me, before they’re done, every rock ’n’ roll icon worth talking about is going to be reduced to a two-dimensional caricature who endures early family trauma, falls in love while pursuing the dream of a music career, has some success, battles drink and drugs, faces temptation and pressure from The Man and then either experiences redemption or just dies. And there’s nothing we can do about it.

I have nothing against Mike Myers. He’s pretty funny. Does accents well. He’s also 43, which is 12 years older than Who drummer Keith Moon ever got to be. The idea of Myers playing Moon is almost as bad as making a movie about Moon in the first place. Elijah Wood is young enough to play Moon, but instead he’s going to play the physically menacing Iggy. Wood has been a Hobbit, so I guess he’s as qualified as anyone. But really? An Iggy Pop movie? Do you bring your own peanut butter to the multiplex?

Can you see Colin Farrell playing Shane MacGowan? How about Luke and Owen Wilson as Ray and Dave Davies? Or Bob and Tommy Stinson? Or both? Or Jake Gyllenhaal as Freddie Mercury and Heath Ledger (with his 10 Things I Hate About You hair) as Brian May in the Queen story? Felicity Huffman as David Bowie? Kevin Zegers, Huffman’s co-star from Transamerica, would be a perfect Kurt Cobain, maybe because he essentially played Kurt in Transamerica. Pretty much anyone could play the guys in Kiss, I guess. Or the Ramones. Just hand out ripped jeans and black leather jackets. Is Howard Stern too old to play Joey?

There are two major, deal-breaking problems with such films. First, movie people almost never get rock ’n’ roll right. Second, and worse, once there’s a film about a person, the real person is replaced forever by the movie image. And since the movies don’t get rock right, you’re looking at a really depressing revision of history.

One movie that got the music right is Almost Famous; Cameron Crowe was smart to base it around a fictional band. Billy Crudup and Jason Lee are really good and really convincing, but that’s because you weren’t sitting there thinking, “They don’t really look much like Page and Plant or Mick and Keith or whoever.” Crowe got the feel right—which makes sense, because he was there—by creating characters for his story. Well, there was Lester Bangs, played by none other than Philip Seymour Hoffman. Good warmup for Capote, huh?

But most movies that purport to be about rock music are so far off the mark that you can’t help but shudder at them. The reason, I think, is that movies cost so much and go through so much demographic analysis that even the good ones are made the same way the worst, blandest music is made. Films are never spontaneous. They can’t be. The really troubling thing, though, is the way the filmic version of a person seems more vivid and real than the actual person, and even sort of replaces that person in the collective memory.

Take this Moon bio, for instance. If you center on Moon, then you’ve already whiffed on the dynamic that made the Who one of the truly great rock bands. Pete Townshend was the bona fide creative genius of the Who, his vision realized by the varied gifts of Moon, Roger Daltrey and John Entwistle. If you ignore the story of the band, picking up on Moon’s late-’70s misadventures with Ringo and Nilsson in L.A. and London, then what’s the point? You have a bloated, drunken former drummer who takes too many pills and dies. Either way, millions of people are going to see 43-year-old Mike Myers as Keith Moon forever after that. Just as my daughters came home from the theater thinking Johnny Cash was a moody, slim-hipped Joaquin Phoenix.

It already bothers me that great chunks of the past are breaking off and slipping away like pieces of glacier, never to be seen or heard from again. There are an awful lot of people out there whose idea of our musical heritage is the first season of American Idol.

It isn’t anyone’s fault, probably, or it’s everyone’s. When I was 18, the history of rock ’n’ roll was fairly manageable. You had to understand Elvis, Buddy Holly and Chuck Berry, plus the blues, then the British Invasion and the Summer of Love—and then punk coming along when rock started taking itself way too seriously. If the Arctic Monkeys were blowing my teenage doors off, I probably wouldn’t give a shit about any of that history, either. There’s just too much of it to bother with.

I guess what really sucks is that some kid like that is going to pay $9 to see a movie about Keith Moon, stare at the flat screen and the flatter plot, then leave with his apathy and ignorance of that glorious past totally vindicated. He’ll care even less, which is just scary. The only thing scarier? Mike Myers standing with his Oscar, thanking Roger and Pete and the late, great Keith Moon.