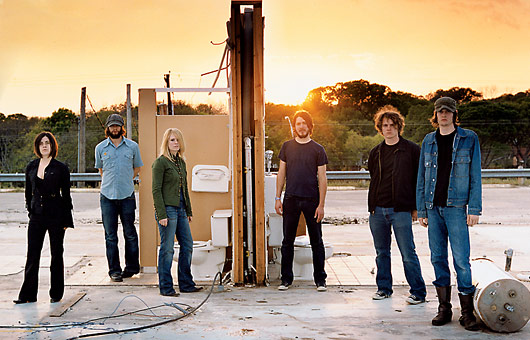 It’s March, and Austin’s native sons and daughters in the Black Angels are cranking out their sensimilla-laced brand of thunder and drone before a packed South By Southwest festival audience. Your screaming senses, however, try to warn you that you’re not in Texas anymore, but somewhere deep in the inky maw of Southeast Asia, being transported upriver into some unspecified heart of darkness.

As the Black Angels launch into apocalyptic anthem “The First Vietnamese War,” their light show explodes with images of dead and mangled soldiers, bombs plummeting from planes and napalm strafing the jungle. On cue, guitarist Alex Maas begins to shudder. “We got off that boat—Charlies everywhere!” he moans, as his bandmates answer with a deathly, wah-wah-drenched groan of their own.

“We want to create an entire experience—music and visuals—where everything is coming from the same place, from the same state of mind,” explains guitarist Christian Bland. “Too many bands now are just singing songs about, ‘Look at me, I’m onstage!’”

The Black Angels’ communal state of mind began to coalesce in 2004. Bland and Maas had been in a psych combo called (in a nod to Syd Barrett) Black And Green Scarecrow. But after attending a Warlocks gig and witnessing the sheer power emitted by the California nine-piece, they sensed their true calling. Drummer Stephanie Bailey and guitarist/bassist Todd Keller (since replaced by Nate Ryan) soon came aboard, followed by “drone machine” specialist Jennifer Raines and, later, multi-instrumentalist Kyle Hunt. Along the way, projectionist Richard Whymark became the unofficial seventh Angel.

Austin audiences were quickly smitten by the Angels’ marathon sets of what the band calls “Native American drone ‘n’ roll,” a description Bland attributes to his and Maas’ love of tribal beats and droning guitars. A limited-edition EP, Who Will Survive And What Will Be Left Of Them? (a Texas Chainsaw Massacre reference), was issued in early 2005; before the end of the year, the band had toured both coasts and released a self-titled EP.

Full-length debut Passover (Light In The Attic) is stonier than any of today’s crop of stoner rock, and it’s rife with classic references: 13th Floor Elevators on “The First Vietnamese War,” Sound Of Confusion-era Spacemen 3 on “The Sniper At The Gates Of Heaven,” Warlocks/Brian Jonestown Massacre on the fuzzed-out, electric sitar-laced “Manipulation.” Needless to say, with a name like the Black Angels, the Velvet Underground influence looms large, too. Intriguingly, Passover‘s sleeve contains a quote from expressionist painter Edvard Munch reading, “Illness, insanity, and death are the black angels that kept watch over my cradle and accompanied me all my life.” Bland says the line was too cool not to tap as an ad hoc band manifesto.

Also fueling Passover is the dark side of the ’60s. Lyrical images of blood and death, war and imperialism, anomie and paranoia, all course through the record like the Angels’ own private Altamont. A hidden track at the end, an acoustic protest tune called “Iraq War Song,” additionally connects the then and the now. But the Angels don’t want to be viewed as a political band. “In my mind, we just sing about life and what happens,” says Bland. “But some of that will be political.”

The Angels are nearing completion of their second album, and Bland says they’ve already written enough material for three full-lengths. Meanwhile, Passover should cement the group’s reputation as heirs to the Lone Star State’s storied lysergic tradition, following in the footsteps of the Butthole Surfers and 13th Floor Elevators.

“Oh definitely!” agrees Bland. “In fact, we’ve asked Roky Erickson, through his manager, if he’ll come sing a couple of songs with us. We’re still waiting to hear back on that, but we’re hoping.”