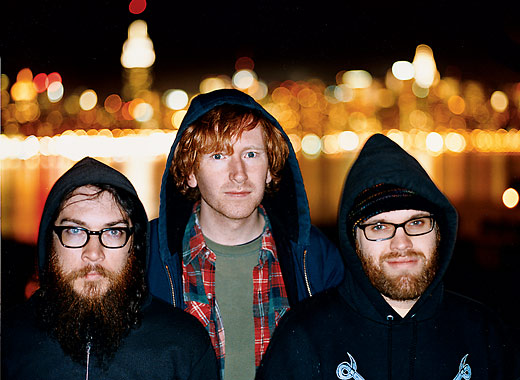 Sure, there’s nothing new under the sun. My Bloody Valentine defined squall as pop song 15 years ago. Link Wray poked holes in his amp with a pencil before he created “Rumble,” an instrumental that, nearly 50 years later, still causes catfights under full moons.

“All the most vital, arresting music has contained some bit of noise,” declares Parts & Labor drummer Christopher Weingarten. “So the idea of noise and melody intertwining doesn’t thrill me that much.”

“The lyrics cover some pretty general concerns about our consumer society,” says vocalist/bassist/electronics manipulator BJ Warshaw. “The increasing division between the haves and the have-nots and massive militarization around the world.”

However, P&L’s third album, Stay Afraid (Jagjaguwar), is no shotgun ceremony. Suggesting Oneida’s 2002 LP Each One Teach One with Noam Chomsky on vocals, all that racket clamoring for equal attention with the rather dire banter is catchy. The album’s swirling, carnivalesque organ lines are hummable, the guitars have the jagged precision of late-’80s Sonic Youth, and the electronic gadgetry is at the mercy of song form. In that sense, Parts & Labor shares similarities with early Pink Floyd, Comets On Fire and aforementioned labelmate Oneida.

“I’ve been a fan of harsh noise for about a dozen years,” says multi-instrumentalist Dan Friel. “But I’ve always been more interested in incorporating those sounds into rock bands.”

P&L’s growth over the course of three albums is nothing short of amazing. Constant gigging with the likes of Deerhoof, Melt-Banana and Lightning Bolt as well as opening for Can’s Damo Suzuki hasn’t hurt the group’s development, either. Warshaw and Friel have played together in one noisy ensemble or other since 1999, and Weingarten (who also works as a music journalist) joined the group for Stay Afraid.

“We had originally planned on being a vocal band, but our first batch of songs was instrumental,” says Warshaw. “Later, we felt we had something to say lyrically, or at least some obsessions we wanted to vent.”

While the lyrics have helped balance out the band’s ear-shredding sonics, Warshaw also credits the sound of Stay Afraid to the off-kilter rhythms and painfully flat sine-wave tones of Apple’s early-’80s Decathlon computer game. Those cheap blips and squiggles Warshaw heard as a kid inform what Parts & Labor does now.

“Playing overdriven toy keyboards frees us up in a lot of ways,” says Friel. “It ensures that even the most pristine melodies will still sound injured and embattled.”

Adds Weingarten, “We don’t seem to be happy as a group unless the turntable’s a little wobbly.”