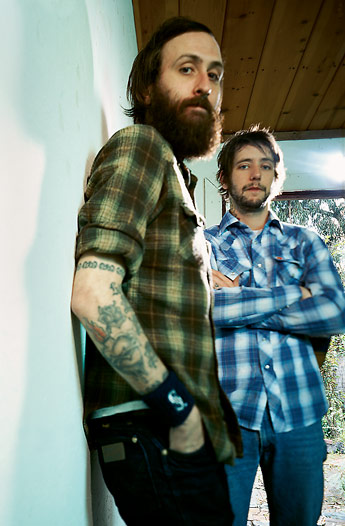 If there were Academy Awards for self-deprecation, Band Of Horses frontman Ben Bridwell would take home an Oscar. Over the course of a conversation, he insists that he’s a “shy singer,” “shitty guitarist” and “terrible drummer.” Despite these alleged handicaps, the guy has managed to create a strong contender for album of the year. Band Of Horses’ debut, Everything All The Time (Sub Pop), is a gorgeous, Southern-tinged record with enough atmosphere to sustain its own planet.

“I thought before recording that I really wanted an ELO-sounding record, with strings and keyboards and synths,” says Bridwell. “But then, as we got closer to it, we wanted to take a more raw approach.”

Despite this less-is-more method, Bridwell’s songs sound lush, even epic at times. His vocals, drenched in reverb, only add to this effect. Bridwell has been compared to Wayne Coyne and Doug Martsch, but his nasal delivery, liberal use of echo and tendency to use his voice as an instrument rather than a vehicle for lyrics more closely parallels My Morning Jacket’s Jim James.

“A lot of these songs didn’t really come from any lyric writing, let alone any singing ability,” says Bridwell. “A lot of the ways the words are sung were meant to hide or mask what’s being said. But there are definitely words.” He chuckles. “I wrote ’em down on paper and everything.”

Amazingly, Everything All The Time also represents the 28-year-old Bridwell’s first full-blown outing as a singer/songwriter. Bridwell’s story begins in Irmo, S.C., where his parents exposed him to music at an early age. “As long as I can remember, we were always falling asleep to really loud music,” he says. “Like some good old Spyro Gyra at one o’clock in the morning.” At 16, Bridwell left home for Tucson, Ariz., where he met Mat Brooke and Jen Ghetto, who later relocated to Seattle and formed slowcore outfit Carissa’s Wierd. When drummer Robin Perringer left Carissa’s Wierd to join Modest Mouse, Bridwell was asked to sign on, despite having no experience behind a drum kit. He later moved to bass, but Brooke and Ghetto remained the primary songwriting force until the group’s dissolution at the end of 2003.

“I’d messed with songwriting a little bit, kind of sheepishly, without any confidence,” says Bridwell. “When Carissa’s Wierd broke up, it came out of necessity and just something to do to keep playing music.”

In a reversal of roles, Brooke stepped away from the mic to assume second guitar duties, while Bridwell took the helm. Asked if he was tempted to record all the parts of Everything All The Time himself, Bridwell stays in character.

“I’m a better bass player than guitar player, but that’s just because I’m a really bad guitar player,” he says. “None of it I’m really good at. Down the road, I’d love to be able to record everything, just for writing purposes. For now, I like not sitting on the hot seat all the time.”