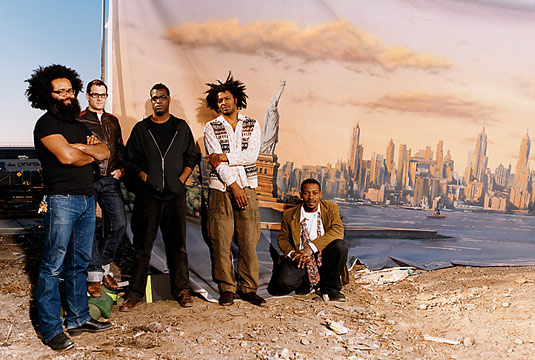 An unconsciously hip Brooklyn band that’s neither clearly spiritual nor plainly political, TV On The Radio is in search of a better way to broadcast. By Natalie Jacobs

In 2001, when Tunde Adebimpe and David Sitek began a home-recording project in their Williamsburg, Brooklyn, loft, they didn’t entertain thoughts of major-label deals. They didn’t think about video shoots or interview schedules. They didn’t intend to beget TV On The Radio, which has set about the task of creating new, weird, urban hymns. They just didn’t see any of it at all.

“We didn’t like the idea of a band, to start with,” says Adebimpe. “We just wanted to look at it as a venue for people to come in and put different ideas down on top of the sketches and frameworks that were made for it.”

Regardless of Adebimpe and Sitek’s intentions, TV On The Radio now exists as something between family and collective and band, but the distinction is clear: It isn’t a roster of egocentric players.

Adebimpe, the group’s main vocalist, and Kyp Malone, guitarist and other primary singer, sit in the café housed inside Bedford Avenue’s Sound Fix record store. The room is dark and mostly empty, with a few patrons typing on laptops or lounging on velvet sofas with their dogs. It’s a brief moment of calm in TVOTR’s otherwise chaotic day. Adebimpe has just arrived from another interview, and Sitek (guitarist and the producer responsible for TVOTR’s blaring atmospherics and otherworldly effects) is elsewhere doing press. Drummer Jaleel Bunton and bassist Gerard Smith are on an emergency run to Guitar Center to replace broken equipment. TVOTR is preparing to embark on an arena tour across the U.S. and Europe in support of its new labelmate, Nine Inch Nails.

Return To Cookie Mountain, TVOTR’s Interscope Records debut, plays like a chorus of art rock’s underground from Brooklyn and beyond. (As for the delicious-sounding title, the band is coy about its meaning, but it’s likely a reference to video game Super Mario World and the elusive area above Vanilla Dome that leads to Ludwig’s Castle.) David Bowie’s vocal cameo on “Province” generated buzz months before Return To Cookie Mountain made it onto Interscope’s release schedule, and Katrina Ford (Celebration), Kazu Makino (Blonde Redhead) and Martin Perna (Antibalas Afrobeat Orchestra) are just a few musicians who filed through the revolving door of Sitek’s studio.

The anti-band sentiment comes up again when Malone speaks about the loose structure of TVOTR’s live shows, during which the group constantly tinkers with vocal arrangements and invites members of the bands it tours with to join in onstage. “I feel like it’s a really easy trap to fall into,” he says, “to stay on the safe side of things until they get really … bandy.” Malone spits the word out with a look of disgust on his face.

Adebimpe appears concerned, thinking about TVOTR’s practice the day before: “I was thinking about that, too, but like, I don’t … It didn’t sound bandy. Do you feel like it sounds bandy?”

What do they mean by the word “bandy,” exactly?

“Just way too clean and like big rock,” says Adebimpe.

“Everyone occupies their position and fills a certain space, but ideally it’s a fluid thing,” says Malone. “I hope we can attain that and also not be self-indulgent, like our own personal navel-gazing mushroom-trip kind of thing. I want it to be like a show, a rock show, but I don’t want it to be boring for us.”

TVOTR is proof that, if you have dreams of stumbling into an organic music experiment through chance meetings with like-minded people, it helps to move to Williamsburg. Sitek arrived in Brooklyn by way of Baltimore; the Nigerian-born Adebimpe moved from Pittsburgh to attend film school at NYU. In 2003, Touch And Go released the five-song Young Liars, an EP that stands in stark contrast to the slapdash, plastic sexuality of the dance/punk and electro pouring out of New York City. The duo’s four original tracks exude distorted soul in an entirely unidentifiable way, and its a cappella cover of the Pixies’ “Mr. Grieves” helps drive the point home: TV On The Radio is smart without being serious, challenging but exhaustively pretty. Around this time, the pair picked up Malone, another Pittsburgh native who moved to Brooklyn to be close to his daughter.

On Desperate Youth, Blood Thirsty Babes, TVOTR’s 2004 full-length debut, Adebimpe started harmonizing with Malone instead of layering his own vocals. Bunton and Smith came aboard as a temporary rhythm section for touring purposes, even though neither had previously played drums or bass. (Both, however, are skilled guitarists.) Bunton and Smith eventually became permanent members of TVOTR, which wrapped up 2004 by taking home the Shortlist Music Prize for Desperate Youth.

Depending on whom you ask, the guys in TVOTR are either at the top of the world or at the top of a rollercoaster. Thanks to Interscope’s gung-ho PR campaign, their eyes stare you down from glossy magazine covers. Bowie has been known to hang with them backstage. Budding musicians pass them demos in bars. So why can’t the guys in TVOTR pay their medical bills? Or buy lunch without a little help from their friends? Or fit an MTV crew into their cramped, “fucking gross” practice space?

“We haven’t even walked in the gate yet,” says Adebimpe.

“Yeah, so it’s totally uncertain,” adds Adebimpe. “God willing, we’ll be signed before we have to live in boxes on the street.”

Their laughter is filled with a bit of annoyance at having to answer for their band’s success before reaping any of the financial benefits. TVOTR will officially walk into the proverbial gate and join the Interscope roster when Return To Cookie Mountain is released in August. What happens from there is anyone’s guess.

Adebimpe and Malone maintain that self-releasing your music is the best way, even “the only way that makes sense.” Neither of them listens to bands signed to major labels. (“I listen to big corporate rock from the ‘70s,” says Malone, “but the only music I listen to that’s current is indie rock.”) None of which seems to explain TVOTR’s jump from Touch And Go to Interscope. So what changed?

“We did,” says Malone. Then he chuckles and rolls his eyes, “It all went to our heads. We’re too big for our britches.”

So far, the members of TVOTR haven’t allowed potentially compromising situations to upset them. They laugh (eventually) when Giant magazine dresses them up in “wack” gear for a photo shoot. When Interscope planned to have a design team make short films to market Return To Cookie Mountain online, Adebimpe, who’s created stop-motion animation for MTV’s Celebrity Deathmatch and the video for the Yeah Yeah Yeahs’ “Pin,” volunteered to handle the project himself.

“Interscope was like, ‘They’re gonna take the band’s image and try to promote the record,’” he says. “I told them I’d like to have a shot at that, because I don’t want people I don’t know to be doing anything with the band in that way. Because God only fucking knows what that could turn into.”

“If anyone’s gonna fuck it up, I’d rather have my fingerprints all over it,” says Adebimpe. “I’d rather have to answer to all of my friends, instead of all of us being pissed off at some dude whose idea of cool is really, really evil and awful.”

In the wake of Hurricane Katrina, TV On The Radio recorded “Dry Drunk Emperor” and made it available for free download at Touch And Go’s Web site. Not only is it one of the first direct protest songs written about Katrina, it also proved to be a bigger turning point for the band than any award or record contract. These hip, experimental Brooklynites instantly became a socially conscious band, which isn’t necessarily a torch that any of its members want to carry. According to Malone, TVOTR writes love songs, albeit ones set in a violent, spiritually bankrupt world where alienation is universal and confusion is sex. The first lyric on Cookie Mountain is “I was a lover before this war,” sung in high harmony over horn bursts drowned in guitar fuzz. The line can be taken as the album’s thesis statement.

The element of soul that bleeds into TVOTR’s music has an almost spiritual effect on listeners. But for all the art-is-life aesthetics and affected Williamsburg social scene that surrounds them, Adebimpe and Malone can only joke about their music’s spiritual impact.

“Before we ever record anything, we have a prayer meeting,” says Malone. “And we all hold hands, and we wait for God’s answer to say yes, the song goes on.”

In the ensuing fit of laughter, the sound of clear, choirlike singing and flutters of harp and mandolin waft from the café speakers.

“This is Feathers, right?” asks Malone, correctly identifying the Vermont hippie-folk outfit. “And it sounds spiritual to me. I’m not saying we’ve succeeded in [conveying honesty or truth], but I know we’re trying to do that. And that comes off as the gospel.”

He makes grand sweeping motions with his arms, as if conducting a Southern Baptist choir.

“Can you write that down, that I just did that?” he asks, inciting another fit of laughter.

Later tonight, TVOTR performs a secret set at Williamsburg’s Union Pool, a low-lit bar built on the former site of a pest-control supply store. But secrets in New York exist to be shared, and the patio fire-pit between Union Pool’s bar and the venue’s entrance is swarmed with people who couldn’t get in, ready to claw down the door. (TVOTR’s upcoming show at the much larger Bowery Ballroom has sold out months in advance.)

Malone sips his double Jameson, neat with a water back. His naturally nappy hair and beard frame his eyes in a gigantic globe, and his thick glasses obscure the exposed portion of his face. It all serves to both mask and call attention to him, and from every corner of the bar, Brooklynites approach in an endless receiving line: grabbing his hand, craning a neck to wave. They want to know if he’s seen the photos, if he got a chance to listen to the CD, if there are any spots left on the guest list. One friend brings a handwritten graphic novel as a pre-tour present. Malone warmly encourages him to get published.

TV On The Radio takes the stage after 1 a.m., by which time Malone’s previously calm demeanor has flipped to an adolescent buzz. “I’m so psyched to play this song!” he yells at the crowd, jumping along to the fast opening chords of “Wolf Like Me.” The song is Return To Cookie Mountain’s most likely candidate for radio play, a raucous jam that radiates with bloodlust.

Before the performance devolves into a drum circle, the band tears into the tripping beat and gurgling horns of Mountain’s “Blues From Down Here.” Adebimpe digs down to the depths of his range and uglies up those choirboy pipes, wailing like some erstwhile member of Bad Brains: “It’s not the last you heard from me.”

The room has started to empty out. The last train to Manhattan left an hour ago, and tonight’s full moon has already started to fall. But the ones who stayed know Adebimpe means it.