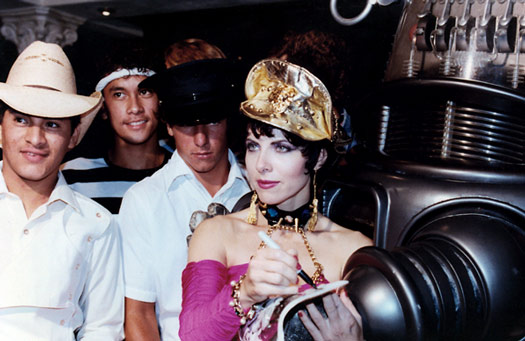 The title of Josie Cotton’s new album, Movie Disaster Music (Scruffy), is an apt descriptor for her entire career. Her 1982 hit single “Johnny, Are You Queer?” wound up in films and on the charts, but disastrous record-label drama sidelined her for much of the last decade. Now she’s back to making music and running a recording studio. MAGNET asked Cotton for the tale of how Josie met Johnny.

I’ve never told the real story of “Johnny, Are You Queer?” before. I’ve been reluctant to talk about it because, to tell you the truth, I don’t know what happened. I have my theories, but the only thing I’m really sure of is that it all came crashing down in the end.

I had driven out to Los Angeles from Texas in the late ’70s to make it as a songwriter. I had my demos and my big dreams. I didn’t know yet about the firestorm of controversy and infamy that I was heading toward. The whole “Johnny, Are You Queer?” phenomenon was much bigger than me, but I didn’t know it at the time. I was just the singer. It was really more about breaking down barriers: sex and politics, punk rock and corporate America, and prejudice that cut both ways. For the record, it was my supreme honor to be the girl who got to stick it in the eye of all the small-minded morons of the world. They owned the word “queer” back then. They kept it in the back of their pickups or in the locker room, to haul out when someone just didn’t look right. Where I grew up, if a guy looked the slightest bit interesting, he was often called a queer. Even if they didn’t say it out loud, there was this look they gave; you could see the pure hate in their eyes.

When “Johnny, Are You Queer?” was first released on Bomp! Records in 1980, people just couldn’t believe what they were hearing. Gay guys, straight guys, bi-girls, you name it—they gasped, they laughed uncontrollably, they jumped around. I’m sure the assholes were laughing, too, but they were drowned out now. “Johnny, Are You Queer?” had something for everybody. Girls could relate to falling for some beautiful gayboy, and I can’t tell you how many of those same gayboys wrote to me, telling me they came out of the closet because of this so-called homophobic joke song.

But my problems really began when the religious right decided I was Satan—or, more specifically, Satan’s transgender spawn thing. There were protests at L.A. radio station KROQ, there were counter protests, there were fake protests and fake counter protests. One night I was watching television when I came upon my album cover being held up to the camera by a lady evangelist with pink hair. They were playing “Johnny, Are You Queer?” at half speed, and I remember thinking, “How cool, I sound just like Brian Wilson.” The televangelist said there was no Josie Cotton. I didn’t even exist. What I hadn’t known was that I was actually a gay man trying to convert unsuspecting straight men to my homosexual lifestyle. Wow! This was a personal best.

Forged in the L.A. club scene’s punk-rock underground of the late ’70s, the origins of “Johnny, Are You Queer?” are murky at best. No one can seem to agree about the details, but here’s the story as I understand it. Punk band Fear was the first to perform a version of the song live. They made no mention of any Johnny character; there was just that sing-song melody to the verse, “You’re a fuckin’ queer boy,” screamed in that jugular-vein-popping Fear kind of way. Philo, the guitar player, was credited with writing that original version, but there were rumors that his roommate had actually written it.

Enter Bobby and Larson Paine, two guys straight out of Philly—kind of cowboys, kind of marketing-genius types—who had discovered the Go-Go’s at their first gig at the Masque. The Paine brothers were freakily dead-on when it came to predicting musical trends. They went on to produce an album for Fear, but they had also begun producing and managing the Go-Go’s. The Paine brothers were instrumental in the success of the Go-Go’s, and girl rockers everywhere owe a debt of gratitude to these unsung heroes who paved the way for the first all-girl band to go to number one in the early ’80s. People forget that most guys had a huge problem with the idea of an all-girl rock band then, even in punk rock.

After they rewrote “Johnny, Are You Queer?” the Paine brothers had the Go-Go’s perform it in their live show. It became the band’s big song, erupting in total anarchy at the end of the night. A meeting was arranged with Fear, and when the Paine brothers emerged from the smoke, they had won the publishing for the song in a coin toss. But lives were going to change dramatically. The Go-Go’s decided to go on tour with Madness against the Paine brothers’ strong objections, and they basically parted ways because of this impasse. When the Paines forbade the Go-Go’s from performing “Johnny, Are You Queer?” anymore, it was the end of an era, the end of friendship.

I met Larson Paine in a bank line in Hollywood around the same time the brothers had begun looking for the “voice” to sing the song. I loved that song from the moment I heard it. I lobbied hard just to be able to sing on the publishing demo the Paines made for Warner Bros. Larson, who had become my boyfriend, was the big holdout. I had to agree it would be a one-time thing because they were going to find the perfect girl later. Bobby finally told Larson to just let me sing it. It was only a demo. What harm could it do?

The L.A. press never quite forgave me for absconding with “Johnny, Are You Queer?” There was a common misconception that I had somehow stolen the song from the Go-Go’s. I didn’t. Or that I had cheated my way into a record contract. I hadn’t. The first label I signed with, MSR, folded before the record even came out. Larson called Greg Shaw at Bomp! Records. Shaw was the guy really responsible for turning “Johnny, Are You Queer?” into an international dance hit, with publicity you couldn’t have dreamed up. But we had made it clear from the beginning that we wanted to transition over to a “real” label. Just a single with Bomp!, then the big boys at Elektra would take it from there, take it all the way. We couldn’t have been more mistaken.

When we were recording my 1982 debut album, Convertible Music, “Johnny, Are You Queer?” went to number two on Canadian radio. In the U.S., a national panel of radio programmers had given the OK for it be played on AM radio if we replaced the word “queer” with a beep. This was great news, but by the time we resurfaced from the studio five months later, Elektra was in freefall and we had an international hit on our hands with no records in the stores. In fact, the day Convertible Music was released, no one was answering the phones at Elektra. The whole label had been fired, from the CEO on down. We began to realize that our only chance to reach our fan base was through MTV. The night before the video shoot for “Johnny,” Elektra decided to pull the plug. “No future in MTV,” they told us.

I began appearing on a lot of television shows: a Halloween special with the Stray Cats and Oingo Boingo, Dance Fever, Square Pegs (starring Sarah Jessica Parker) and a hilarious sketch-comedy show called Laugh Trax. In 1983, I was in the Nicolas Cage movie Valley Girl, performing “Johnny, Are You Queer?” during the prom scene. After doing Solid Gold, I was asked to appear in a series of really odd television pilots for variety shows in which I would be the only white artist onstage with Rick James, Smokey Robinson and Janet Jackson before an all-black audience.

Television and film were much more open-minded to the controversy than other media, where the feedback was so mixed that it was impossible to interpret. I wasn’t famous, I was infamous. I wasn’t the “it” girl, I was the “too” girl: too gay, too anti-gay, too straight, too anti-straight, too street, too commercial, too serious, too lacking in seriousness, too controversial.

My second record, 1984’s From The Hip, would hang over us like some portal out of Hellraiser. Near the end of my association with Elektra, I had been assigned a female publicist who was always pushing me for “more T&A.” When she approached me about doing a Penthouse layout, I declined. She was furious and stormed out of the room. I was dropped from Elektra almost immediately.

I ultimately walked away from the music business, but I never stopped being an artist. I went on to record five more albums over the years, and I decided to open a recording studio with my life-long friend Geza X, a Los Angeles punk icon who produced the Germs and Dead Kennedys. We recorded everything from Meredith Brooks’ “Bitch” to Elliott Smith’s From A Basement On The Hill at our studio, Satellite Park.

A few years after the whole “Johnny, Are You Queer?” fiasco had pretty much been forgotten, a friend insisted I go to a psychic, who took my hands in hers and asked, “Did you know that you are queen of the fairies in another dimension?” So if my fairy throne awaits me in some other world, I can wait. The truth is, I wouldn’t have missed this one for anything.

Oh, and by the way, to finally answer that question once and for all: He was flamin’.

[…] at better beauty parlors everywhere. As my colleagues at Magnet have documented thoroughly, here and here, Cotton’s career — which later crossed paths with Elliott Smith — […]

Great article, I’ve missed hearing your voice and dancing to your music. More my fault, I work to much! hehehehee!

After everything that you have been through, I so glad to hear that you are still making music. I’ll be getting all of your music off of iTunes this week. I have the cassettes!
Congrats on doing the studio thing! Much love to you!
Keep up the fantastic work!

Thank you for you!

[…] Figure Skating at the Olympics–has come to a close and the press is still wondering, as Josie Cotton once put it, “Johnny are you […]

I was just going through some stuff on KROQ’s website and came across a pic from the 80s of protesters outside KROQ protesting the Johnny Are You Queer song. I remember hearing this song in a record store (yes I said record store) in Vancouver Canada in 1982 and I knew I had to have it. But I didn’t have the money to buy it while I was in Canada so I had to wait over a year to actually buy the Valley Girls sound track! I now have it on my iPod and I play it in my car all the time.

I think that the Runaways were out before the Go-Gos, which would wipe out the statement about the Go-Go’s being the first all girl band.

For what it’s worth, I liked them too. Still have Johnny on my ipod.

[…] 2006, Cotton wrote an article for Magnet explaining how “Johnny, Are You Queer?” came to exist, how she wound up recording it […]

It refers to the Go-Go’s as “the first all-girl band to go to number one.” Unless we’re talking about Japan, the Runaways don’t count.

[…] “Johnny, Are You Queer?” (Read the excellent article about that controversy here.) But for me, it was The Suburbs’ “Music For Boys.” The homosexual undertones of […]