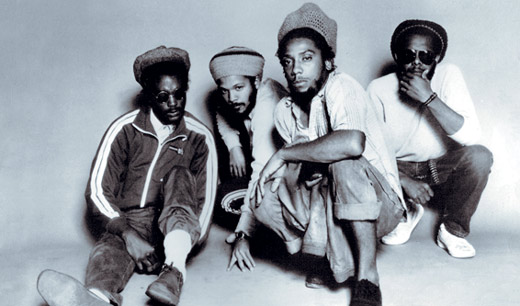 With CBGB closed for good, it seems like an appropriate time for the DVD release of Bad Brains: Live At CBGB 1982 (MVD). This frenzied performance of a now-legendary act before an appreciative audience epitomizes the cutting-edge status the club once enjoyed. (If only Live At CBGB 1982 included more footage taken outside the club; there’s just an agonizingly short intro that shows two cops walking by the entrance.)

Seemingly filmed in Sweatvision, the lively front-of-stage fans spend the show in spastic glory, competing with H.R. for space on CBGB’s notoriously tiny stage. One of the cameras was positioned behind the band, capturing this chaos at waist level.

It’s worth watching Live At CBGB 1982 twice: once for the band and music, another to survey the audience for a time-capsule look at punk rock. There’s a great moment toward the end, when a dazed-looking young man stands peacefully next to the stage. He’s quickly planted into the ground by some galoot. The film ends with brief interview segments with the audience, including a young woman who says she broke her wrist after a motorcycle ran over her arm while she was lying in the street.

Given the limited release of Bad Brains’ first few singles and EPs and the band’s sporadic touring, it’s a pleasure to see these hardcore legends in action.