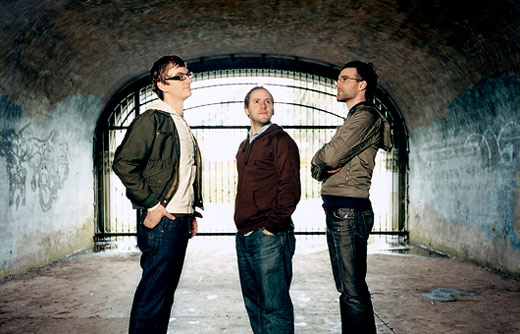 When it comes to categorizing, Antlerand has critics reaching for hyphens and modifiers. “Emo-core,” “psychedelic rock” and “atmospheric trance” are just a few of the genre tags tossed at the Portland, Ore., trio since its formation four years ago, but Antlerand finds little solace in locating a musical niche.

“Those lines of demarcation aren’t always useful, helpful or accurate,” says multi-instrumentalist Zach Okun. “Doesn’t the average listener listen to a wide variety of sounds? The point being, why is it weird that bands are all over the map?”

Appropriately, Antlerand was conceived at different points on the geographic map, starting as a long-distance collaboration between Oregon and Arizona. Okun was studying sound recording in Phoenix when a mutual friend connected him with Chris Larson, a Portland guitarist/vocalist who was busy incorporating visual projections into live performance. The duo debuted as Invisible, releasing The Invisible EP in 2004. By that time, Okun had moved to Portland, and the pair picked up drummer Delaney Kelly after spotting him perform alongside his girlfriend’s modern-dance routine.

Invisible morphed into Antlerand after Kelly’s inclusion, but the group is far from putting on its last picture show. When played live, each song is carefully synchronized with screen images consisting of lines, geometric shapes, people and places. All this might seem like an art-school vanity project, but it did draw the attention of Sleater-Kinney/Quasi drummer Janet Weiss, whom Okun met shortly after moving to Portland. How she came to guest on Antlerand’s recent Branches (Sound Family) is a case of life imitating art.

“We would joke about how that last part of the song (“Now It’s A Year”) was kinda like a Quasi song,” says Okun. “And it just seemed fitting that we’d have Janet come sing on that one.”

Weiss’ contribution is more cameo than showcase, as her singing almost falls through the mix. This is common for Antlerand, which sometimes employs vocals as a texture instead of a soapbox. “Now It’s A Year” opens with Larson’s lucid voice over heavy-handed piano chords, followed by Postal Service-esque clicking and Kelly’s potent, sparse drumming. Larson and Weiss would sound like Mates Of State at the chorus if not for the droning instrumentation behind them. Branches brims with subtlety, whether it’s the slight graces of glockenspiel, accordion and bells, or the discordant Modest Mouse horns at the climax of “Brighter Rays.”

“I really like the fact that some songs, although they’re primarily rock-based instrumentation, all of a sudden a banjo comes out of left field,” says Larson. “I really like that kind of unexpectedness; kinda trying to wiggle out of being easily defined.”