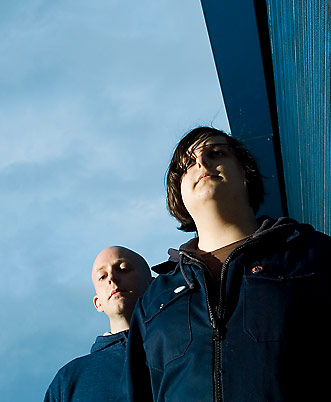 When a band’s larval discussions revolve around krautrock devotees such as Stereolab and To Rococo Rot, there are usually expectations involved: 10-minute-plus hypnotic suites, swells of electronic sounds. So, when Ireland’s Oppenheimer ended up writing short, ADD-style pop tunes instead, even multi-instrumentalist/vocalist Rocky O’Reilly was mystified.

“When we picked our name, we wanted to be Kraftwerk,” says the 23-year-old O’Reilly from the band’s home base in Belfast. “It sounded kind of German. It had that krautrock thing about it. But we were having so many ideas and melodies per song, we decided, instead of throwing these ideas out for 10 minutes, to just put them all into two-minute songs. We love bands like Kraftwerk and Stereolab, but once we started recording (drummer) Shaun (Robinson)’s vocals, we realized that pop was going to lead the way.”

Brimming with M83-like synth squalls and a squeaky-clean pop sheen, Oppenheimer’s self-titled debut (on Bar/ None) kicks with motorik insistence while keeping to a regimen of hook-and-switch melody. “Maybe it’s a conscious decision,” says O’Reilly. “I just don’t see the point of having an eight-bar intro and having that turn into the verse. Why have eight bars when you can have four? It’s always moving and you get all these pop hooks stuck in your head; before you know it, the song’s over and you want to listen to it again. And you do. You’re hearing new things all the time.”

“Hearing new things” appears to have been Oppen-heimer’s charmed credo since its conception in late 2004. Following the break-up of previous band Torgas Valley Reds, O’Reilly and Robinson (the former a studio wunderkind, the latter a schoolteacher seven years his senior) set out to discard the American indie-rock accoutrements of their previous group and indulge a studio-centric keyboard fetish, playing with dense layers of synths and rhythm tracks in O’Reilly’s studio. One self-produced demo and a mid-2005 e-mail from Bar/None later, the compulsive experimenting had paid off.

“When we started, it’s not that we weren’t serious, but it was like, ‘I like keyboards, you like keyboards: Let’s see what kinds of keyboards we can do,’” says O’Reilly, laughing. “We’ll happily play on a keyboard for three or four hours just to come up with something and incorporate it. Now [Robinson] finished his teaching job … This is the first time either of us has quit our jobs to be in a band. It’s taken us by surprise a little.”

Still, with a debut featuring a guest turn by Ash frontman Tim Wheeler (one of Robinson’s childhood friends) and a recent American tour under his belt, O’Reilly has taken his band’s elapsed-time ascent with ease—if also with curiosity.

“I think we’re lucky,” he says. “But it doesn’t seem too fast. In fact, when three days pass and we haven’t heard anything new, we’re wondering, ‘What’s going on? It’s been five minutes!’”