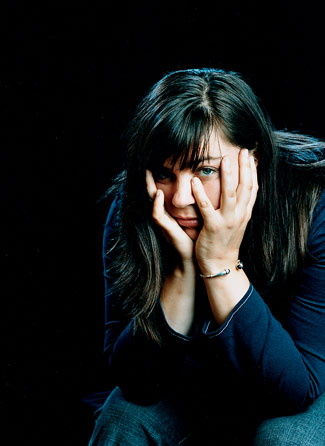 All Jennifer O’Connor wanted was a booking agent. What she wound up with was a multi-album contract with Matador Records. It all came together at last year’s South By Southwest festival, where the Brooklyn singer/songwriter had scrambled to nail down a gig to showcase for said agent. But the trip took on a whole new meaning after a SXSW staffer passed along The Color And The Light, O’Connor’s sophomore album, to Matador co-owner Gerard Cosloy, who loved what he heard.

A year and a half later, O’Connor is unveiling Over The Mountain, Across The Valley And Back To The Stars, her debut on a label she says has been home to “so many of my favorite artists over the years.” A decade ago, O’Connor was a recent college graduate living in Atlanta. She grooved on Bob Dylan, Tom Petty, Silver Jews and Aimee Mann, yet could barely strum the guitar she kept lying around her apartment. But after a co-worker at a record store forced her to join him onstage for an open-mic night at a club, she quickly discovered an untapped musical talent.

“I was terrified and did not enjoy the experience,” says O’Connor of her debut performance. “But the next day, I wrote a song, and it was the best feeling ever. I think I’ve always had a good sense of melody, and that really helped me when I was first starting to play. The band I was in (Violet) only lasted about a year and a half, but by then I was writing lots of my own songs and was ready to move to New York to give this a shot.”

For Over The Mountain, O’Connor was able to elicit contributions from James McNew (Yo La Tengo), bassist Kendall Meade (Mascott, Sparklehorse) and Spoon frontman Britt Daniel, whom Matador co-owner Chris Lombardi had brought to one of her shows.

“I knew I wanted to have a male singer on a couple of songs, so I thought, ‘Well, you’re on Matador now, so why not shoot for something bigger?’” says O’Connor. “I just asked, and Britt said, ‘Sure. I’ll be in New York next week. Can we do it then?’”

“I think I enjoy most her voice,” says Daniel of O’Connor. “It’s just very real, not showy. Classic.”

With shades of Elliott Smith and Rebecca Gates, O’Connor’s songs are refreshingly stripped-down and melody-rich, whether she’s narrating a patience-testing drive (“Exeter, Rhode Island”), transcending urban malaise (“Dirty City Blues”), coming to terms with difficult truths (“Sister”) or defending her faith in a broken relationship (“I Was So Wrong”).

“I think juxtapositions like that within a record are really interesting,” she says. “You get a look inside someone’s brain and how they view their own relationships. It’s cool when they’re not always laid out for you exactly the same way.”

O’Connor is inspired by the ongoing process of honing her craft, especially now that she’s aligned with such a major player in the indie-rock world. “There’s always a challenge of finding a new way to write about an ordinary circumstance,” she says, “which is one of the coolest things about writing songs.”