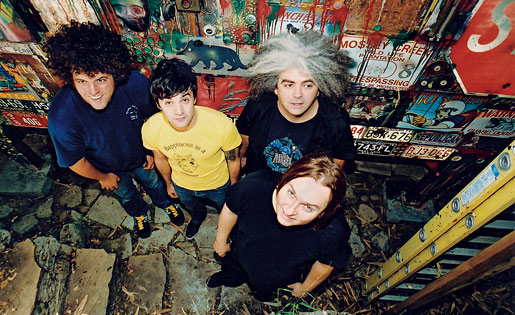 Melvins singer/guitarist Buzz Osborne wants to clear up some misconceptions that have followed his hard-rocking outfit around for the past two decades. MAGNET is only too happy to divulge some pointless Melvins trivia.

Osborne hates that the Melvins are constantly described as “sludgy.”
I can’t imagine how you could listen to one of our records and decide we “sound” like anything. I’ve given up trying to educate the public about our musical philosophy. If all they hear on one of our records is snail-paced sludge, then so be it.

Osborne and drummer Dale Crover brought together Nirvana’s classic lineup when they gave Krist Novoselic’s phone number to Dave Grohl.
We were friends with Dave and thought he would be good for their band. Unfortunately, he now has the same manager as Beck.

Speaking of Beck: He was supposed to work on tracks for the Melvins’ 2000 album, The Crybaby.
His manager told us up front that he considered Beck working with us a “back burner” thing at best and would do all he could to see it didn’t happen. I still blame Beck, because he agreed to do it and has the master tapes made out to his specs sitting somewhere. I always thought if (ex-teen idol) Leif Garrett could get it done with all he’s been through, what the fuck is Beck’s problem?

Speaking of Garrett: He did sing on The Crybaby’s cover of “Smells Like Teen Spirit.”
I wasn’t in the studio with him, fortunately. We did some shows with him, and I had about enough. There’s a reason he’s where he is right now. It’s not good. (Garrett has had repeated run-ins with the law; in May, he was sentenced to a 90-day jail term and three years’ probation stemming from drug-related charges.)

The Melvins have had at least six bass players.
We haven’t actually lost any of them; we’ve just kicked them out. None of them ever quit. It’s always worked for the better, one way or another. I let Dale boss me around. That’s why it works. I’m the whipping boy.

One of the bass players was Shirley Temple’s daughter, Lori Black.
Shirley was really happy to meet me … She’s a tough broad, and I wouldn’t fuck with her. She’s connected.

Tupelo Records owner Gary held gave Osborne the nickname King Buzzo.
It was his way of pointing out how I’m an opinionated asshole.

Despite the fact that he and Crover are both married to women, Osborne insists the two of them are gay.
Dale drums in weird gardening gloves because he’s a homo. I don’t use gloves while playing because I’m a homo. Our wives are well aware that Dale and I are gay but still stay married to us because of the tax dodge. (New members) Jared (Warren) and Coady (Willis) don’t have any idea that Dale and I are queer, but they seem to suspect to some degree. I’m a pretty good dancer. I dig solitude. I once worked at a Mrs. Fields cookie store with a gay guy who always wanted me to go camping with him. Somehow, I resisted.

Osborne is a big fan of the Melvins’ latest album, A Senile Animal (Ipecac).
It’s hip, slick and cool.